Brexit poses huge challenges for Ireland | Europe | News and current affairs from around the continent | DW | 22.12.2020

The transition period for Brexit ends on December 31. This will affect Ireland more than any other EU member state. But hopes are strong that it will at least not reignite the conflict in Northern Ireland. 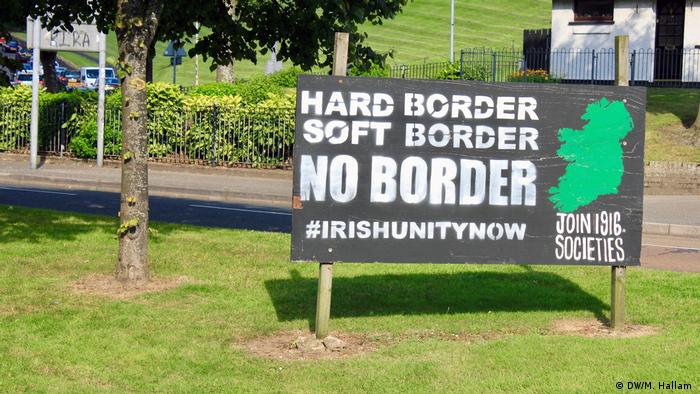 This sign in Derry, Northern Ireland, called Londonderry by unionists, calls for reunification with Ireland

Geographically speaking, Ireland is located at the northwestern margin of the European Union. But as far as Brexit is concerned, it is the bloc's focal point: If the relatively insignificant overseas territory of Gibraltar is left out of the equation, the republic is the only member state with a land border to the United Kingdom.

The end of the Brexit transition period, during which the UK temporarily remained within EU trade structures following its formal exit from the bloc on January 31, will cause massive changes in trade and border traffic. And it is also likely to lead to serious problems that will affect Ireland more than any other EU member state.

It is still unsure whether there will be a deal on future UK-EU relations. What is more, if there were an agreement, this would have to be translated into at least some of the bloc's 23 official languages and ratified by all of the 27 remaining member states by the end of the year.

However, the most important hurdle from an Irish point of view has been taken: Brussels and London have agreed on a Northern Ireland protocol that would function even if there were to be a no deal. This agreement negates controversial clauses in a British internal market act that would have deliberately violated the EU withdrawal treaty. However, it still depends on the approval of the British Parliament, which could decide not to accept the concession made by Boris Johnson's government during what has been a dramatic sprint to the finish in negotiations with the EU.

The protocol shifts the customs border de facto into the Irish Sea, meaning that customs inspections will be necessary only for trade between Northern Ireland and the other countries making up the United Kingdom. This avoids having a "hard" border to the Republic of Ireland; people and goods will continue to be able to cross the frontier without customs checks. This is particularly important for Dublin, because many items produced in the Republic of Ireland are shipped from Northern Ireland. 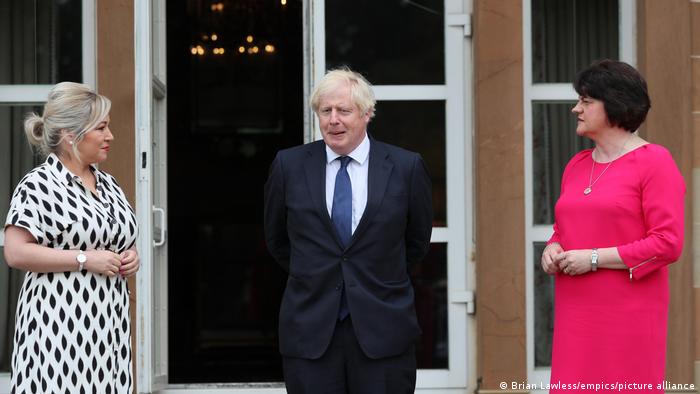 For Northern Ireland, it means that some of the worst fears will not be realized. The head of the regional government, Arlene Foster of the Democratic Unionist Party (DPU), and her deputy, Michelle O'Neill of the republican party Sinn Fein, had written a joint letter to the European Commission in early November expressing concern that a "no-deal" scenario could entail a "real threat to the continuity of food and other products to our market."

Threat to the 'land bridge'

The problem here is not the lack of container capacity — the pandemic-induced economic crisis means that comparatively few goods are being shipped at present. There will also be an additional ferry connection between Rosslare in Ireland and Dunkirk in France from January 2.

"The real issue is those traders who have high value and time sensitive goods," says Tom Ferris from the Institute for International and European Affairs (IIEA), an Irish think tank. The fastest connection between Ireland and the rest of the EU goes through the south of Great Britain, with just two short ferry trips necessary. This "land bridge" is used by some 150,000 trucks annually, according to a study by the Irish Maritime Development Office (IMDO). 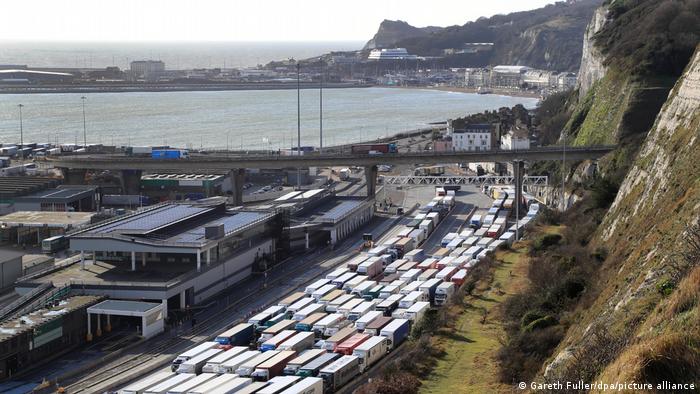 A bottle neck at the Port of Dover's land bridge

Here, a deal has also been struck under which goods in transit will not have to go through the full customs procedures in future. Ferris told DW that the agreement was a good thing as long as traffic flowed freely and there was not the type of chaos at the port of Dover that has been seen recently.

Otherwise, Ferris added, he could not really imagine British authorities prioritizing Irish trucks in their customs checks "by allowing green-marked trucks to by-pass red-marked trucks in order to get onto the ferries or the Channel Tunnel to get to continental ports."

Logistics companies could thus be forced to move operations from this land bridge to longer and more expensive direct connections between Ireland and continental Europe.

The price of Brexit

Jessica Sargeant, a Brexit expert at the British Institute for Government, feels that the reorganization could cause big problems, especially in the first six months — particularly because some modalities are still unclear even though there are just days to go till the transition period ends. 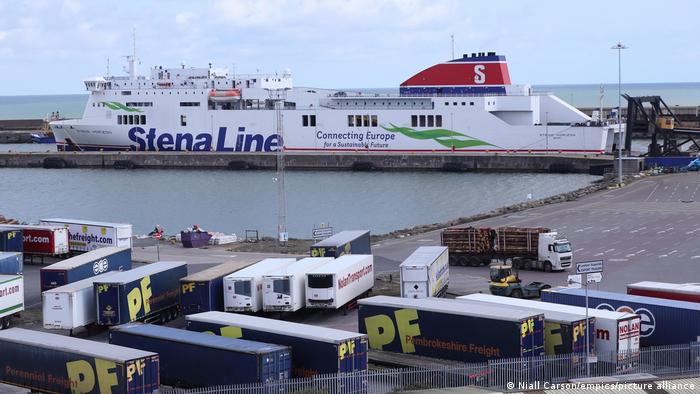 "There's also a problem of readiness. Not only is there this uncertainty, but businesses are also pumping a lot of resources into working out how to deal with COVID. There's still some companies where a lot of people are on furlough … That means they've got a lot less capacity in terms of staffing and logistics to be able to deal with this, Sargeant says.

Things will be more expensive for people in Ireland, particularly when tariffs are imposed on imports from the new year on.If no UK-EU trade deal is reached, both sides will trade according to World Trade Organization rules. The Irish Economic and Social Research Institute calculated back in 2018 that a "hard" Brexit would raise the cost of living by 2 to 3%. For an average household, that means additional annual costs of some €900 to €1,350 ($1,100 to $1,650).

Economic issues, particularly the potential customs checks on the island, had fueled concerns that Brexit could jeopardize the fragile peace achieved in the Northern Ireland conflict.

These concerns were compounded by the fact that Northern Ireland was without a regional government for three years because of a row between the two biggest parties, the DUP and Sinn Fein. But at the start of this year, the sides patched up their differences.

Tom Ferris points to the above-mentioned letter by the two government leaders to the European Commission as demonstrating that a cooperation of sorts was now taking place between both parties and that a new row was unlikely. 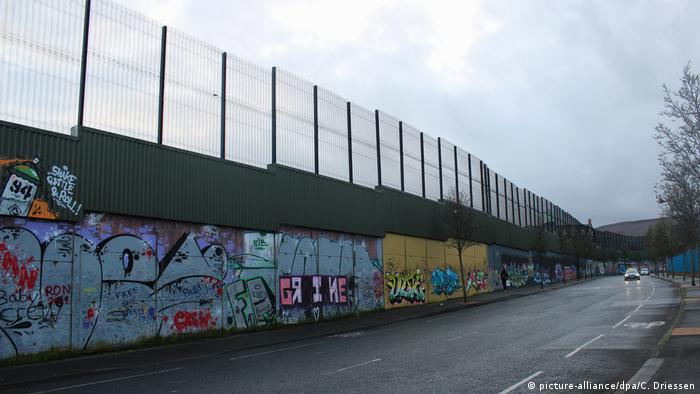 The gates of Belfast's 'Peace Wall,' which divides hostile neighborhoods, are closed every evening

What is more, the Northern Ireland Protocol guarantees free traffic over the border, one of the main conditions of the Good Friday Agreement of 1998, which is seen as the cornerstone for peace on the island of Ireland after decades of armed conflict. The resulting customs border in the Irish Sea is a blow above all to the Northern Irish unionists, who want to connect the province as closely as possible to Great Britain.

"To some extent, the damage has been done," says Jessica Sargeant. She says many unionists feel betrayed by the British government for agreeing to the deal and the trade barriers between Great Britain and Northern Ireland. A "no-deal" scenario would reinforce this feeling, but the unionists will be dissatisfied one way or the other, she believes.

Joe Biden's inauguration as new US president on January 20 will be a positive step from an Irish point of view. Biden, a Democrat with Irish roots, has already come out strongly in favor of a Brexit deal that ensures an open border on the island. IIEA analyst Tom Ferris says Biden's presence in the White House will be something positive that can be built on.

In addition, Ireland's tax policies, which are favorable for overseas companies, have long made it the European location of choice for US companies such as Google and Amazon.