Tony Blair and John Major have written a joint letter urging lawmakers to reject a "shocking" plan. They said the plan imperils peace in Northern Ireland and tarnishes the UK's reputation. 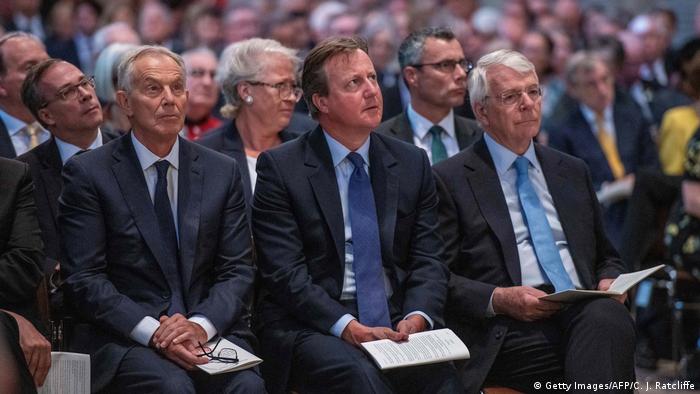 Former UK prime ministers Tony Blair and John Major have slammed Britain's "shocking" plan to pass a law that breaks its divorce treaty with the European Union in a breach of international law.

In a joint letter published by the Sunday Times, Blair and Major, who played crucial roles in bringing peace to Northern Ireland, called on lawmakers to reject the plan, which they say imperils that peace and hurts Britain's reputation.

Read more:Germany: Britain will suffer most if post-Brexit talks fail

The UK government said last week that it plans to break international law by breaching parts of the Withdrawal Agreement treaty that it signed in January, when it formally departed from the EU.

The Internal Market Bill aims to ensure Britain's four constituent nations can trade freely with one another after leaving the EU. British ministers argue that the bill is a "safety net" in the event there is no trade deal reached with the bloc, but top EU officials say it undermines both the withdrawal treaty and trust in future talks.

Johnson, however, has said the legislation is necessary to end threats to impose a "blockade" in the Irish Sea that could "carve up our country."

"This government's action is shaming itself and embarrassing our nation," the former prime ministers said.

"How can it be compatible with the codes of conduct that bind ministers, law officers and civil servants deliberately to break treaty obligations?"

The planned law, which British lawmakers will debate this week, spurred an outcry within the EU, as it would threaten the bloc's previously agreed oversight of trade between mainland Britain and Northern Ireland.

British Justice Secretary Robert Buckland told the BBC on Sunday that the legislation was a "break the glass in emergency provision," and that he would resign if he believed the the law had been broken in an "unacceptable" way.

"I don't believe we're going to get to that stage," he said.

Former Prime Minister Theresa May has also questioned whether international partners would be able to trust the UK in the future.

Irish Foreign Minister Simon Coveney told the BBC that the "kind of inflammatory language'' coming from the British government was "spin and not the truth.''

However, with the UK showing no sign that it will change its course, experts are concerned that talks on a future trade deal could collapse within weeks. If that happens, tariffs and other impediments to trade could be imposed by both sides at the start of 2021.