The UK prime minister accused the EU of threatening to cut food deliveries between Northern Ireland and Britain. In a newspaper article, Boris Johnson claims the new trade bill would protect the UK from a "disaster." 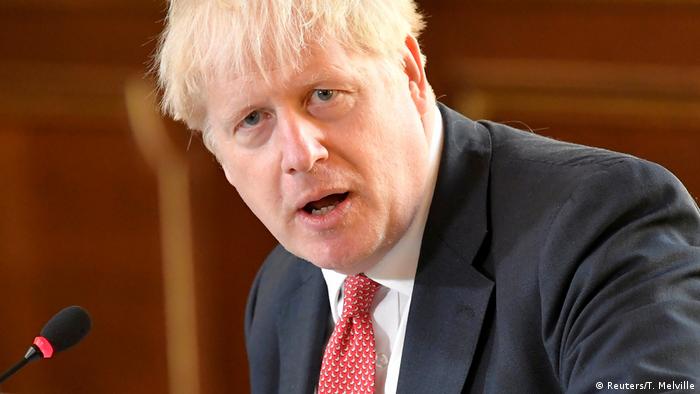 UK Prime Minister Boris Johnson has accused the European Union of threatening a trade border down the Irish Sea and a food blockade between Northern Ireland and the rest of country.

"We are now hearing that, unless we agree to the EU's terms, the EU will use an extreme interpretation of the Northern Ireland protocol to impose a full-scale trade border down the Irish Sea," Johnson wrote in an article that was published in the Daily Telegraph newspaper. The article was titled "Let's make the EU take their threats off the table and pass this Bill," in reference to the proposed Internal Market Bill which sparked anger in Brussels.

Johnson said a blockade could occur unless the government agreed to terms put forward by the EU bloc. He said the EU was posing a risk to the UK and peace in Northern Ireland, where sectarian violence had mostly been kept at bay since the 1998 Good Friday Agreement. He stated he wanted a trade deal similar to that between Canada and the EU, adding that "if the EU is willing to offer these terms to Canada then it makes sense to offer the same to us."

"We have to protect the UK from that disaster, and that is why we have devised a legal safety net – in the UK Internal Market Bill – to clarify the position and to sort out the inconsistencies," wrote Johnson.

The UK unveiled a law on Wednesday to rewrite parts of its EU withdrawal deal, which caused the EU to demand new talks on the divorce deal.

The document, known as the UK Internal Market Bill, could impact customs and trade rules in Northern Ireland once all parts of the Brexit deal were finalized.

In the Daily Telegraph article, Johnson defined the row as a matter "sovereignty."

"As I have never tired of saying, we have left the EU, but we have not left Europe. But they also know – or at least they know now – that leaving the EU means the UK is serious about its new-found sovereignty," he wrote.

The UK and EU are due to meet in Brussels next week, and have maintained that they will come to a full agreement on terms by mid-October.

An intense round of post-Brexit negotiations ended early in Brussels with European Commission chief Barnier citing "serious divergences" between the two sides. A new round begins next week in London.