Brazil's APAC recovery centers focus on rehabilitation and understanding, instead of weapons and violence. An EU project hopes the idea will catch on around the world. 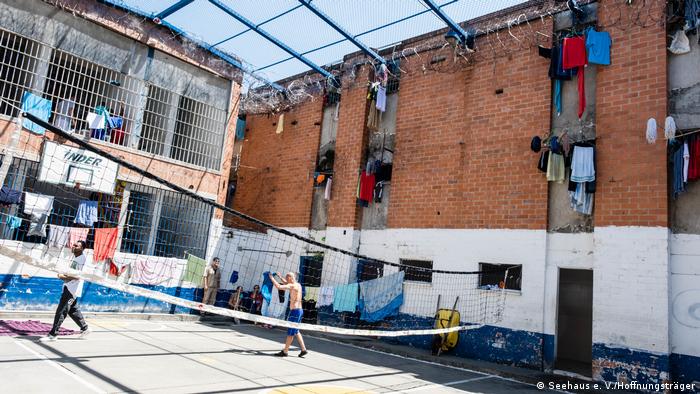 Sport is played in the courtyard of Colombia's Bellavista APAC: The EU finances the construction of APACs in Latin America

Marlon Samuel da Silva is wistful about his time behind bars, the daily routine, the community, the concerts he gave.

The 40-year-old spent 11 years and eight months in jail after being convicted on a drugs charge. He was only behind bars symbolically, as he spent most of his time in a special establishment where he could roam freely — with no guards or weapons. The Association for the Protection and Assistance of the Convicted (APAC), which promotes restorative justice, has set up 60 recovery centers, which currently house some 4,000 detainees.

Prisoners are not considered as criminals here. They are recuperandos, people who are in recovery, and are addressed by name. They do not wear uniforms and even help run the establishment, doing all the cooking, cleaning and washing. They do have to follow a strict routine but this is to help their rehabilitation into society. 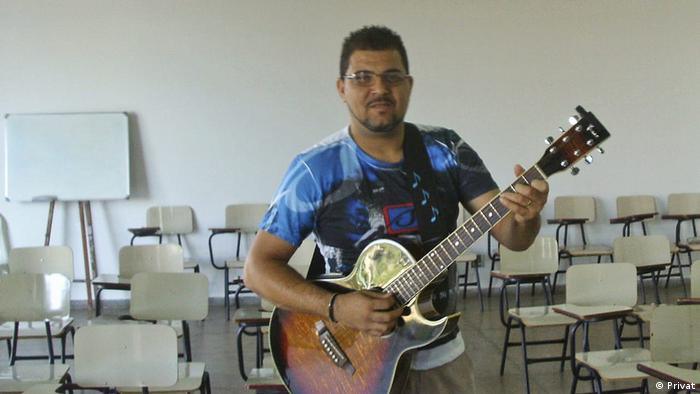 "It's strange to say it, but I miss the routine," said da Silva, who likes to play the guitar. "I had some wonderful times and I got around a lot." He would regularly give concerts in other APACs.

'Even a dog wouldn't last'

Recognition and positive input are not usually part of daily life in Brazilian jails, which more often than not are associated with abuse, torture, riots and organized crime. 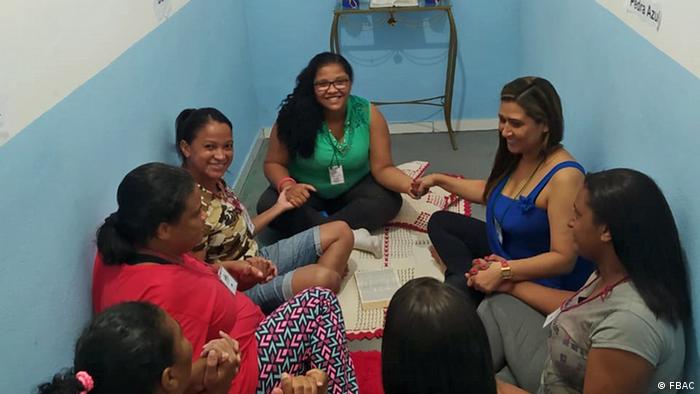 At APAC Piracicaba, inmates gather in a cell to pray together

Brazil has a prison population of about 760,000, which is the third-largest in the world after that of China and the US. According to the World Prison Brief, the occupancy level is 151%, compared with 121% in Colombia.

Marlon da Silva has not recovered from his experiences of the "normal system."

"I spent a year there and I suffered terribly," he said. "There are sometimes more than 30 people in a cell meant for nine. Even a dog wouldn't last."

In the APAC centers, there is no over-crowding and the recidivism rate is 15% by comparison to 85% in the mainstream establishments. The waiting lists for APAC are very long. Yet, the costs are lower. It costs the equivalent of €250 ($302) to detain somebody in an APAC for a month, as opposed to €644 in other institutions. The APACs are cheaper because there is no need to pay armed guards. 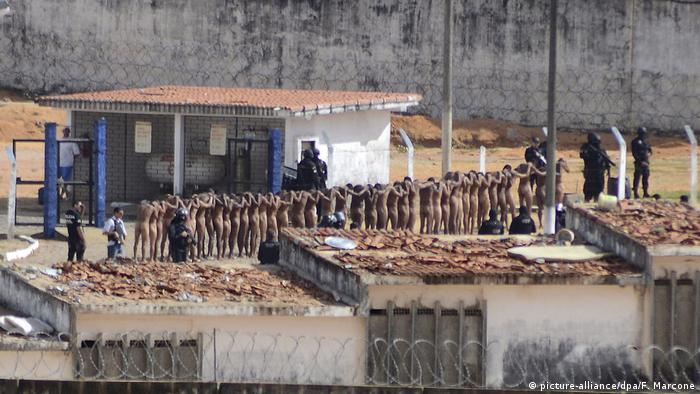 Humiliation and violence: Following a 2017 riot at Brazil's Alcacuz prison, inmates were forced to stand naked in front of heavily armed police officers

"There are no armed guards or police officers in any of the 60 APACs," said Denio Marx Menezes from the Fraternity of Assistance to the Convicted (FBAC), which runs the alternative APAC detention centers, which were set up by Catholic lawyer Mario Ottoboni in the 1970s after he became convinced that it was impossible to rehabilitate detainees in Brazil's mainstream penitentiary system. He championed the maxim: "People enter here, crimes stay outside" and opened the first APAC in Sao Jose dos Campos in 1972 in the state of Sao Paolo.

From the start, the centers were non-profits and often funded by donations. But in 2020, they were recognized by the Brazilian state and started receiving financial support. They have mushroomed around the country. "We are working with the Brazilian ministry of justice on a plan that eventually envisages a pilot unit in each Brazilian state," Denio Marx Menezes said, explaining that there were currently APACs in six of the country's 27 states and districts but that there were openings in 14 more coming up. 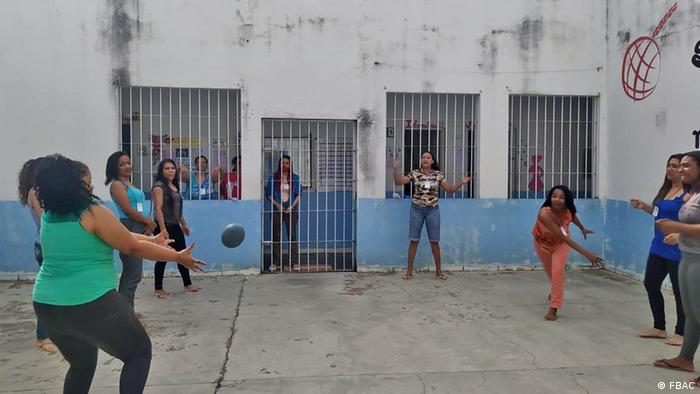 At APAC in the Brazilian city of Piracicaba, inmates play sports in the courtyard

The APACs have also found support from the EU. In 2016, a European project looked into transposing the idea to other countries in South America as an instrument for strengthening civil society and promoting the rights of detainees. "The initiative should fight torture and all forms of abuse and promote APACs as a model that could serve worldwide as an alternative for the chaotic traditional penitentiary system."

The EU's main partner is AVSI, a Brazilian non-profit organization, while responsibility for implementing the scheme lies with the FBAC as well as the justice ministries of Brazil, Chile, Costa Rica and Columbia.

Some critics have questioned the religious element, but FBAC's Menezes played this down. "APACs are not religious institutions," he explained. "However, they do not renounce their religious roots." In practice, not only are prisoners given the same religious support provided by the law to all detainees in the country, but there are also Bible interpretation classes and prayer groups, as well as courses offered by the UK-based non-profit organization Prison Fellowship.

Marlon Samuel da Silva became religious in jail. "I was led to God through a detour in crime," he told DW. "In the APAC, I saw a man convicted for murder care for somebody who was ill. That's God." 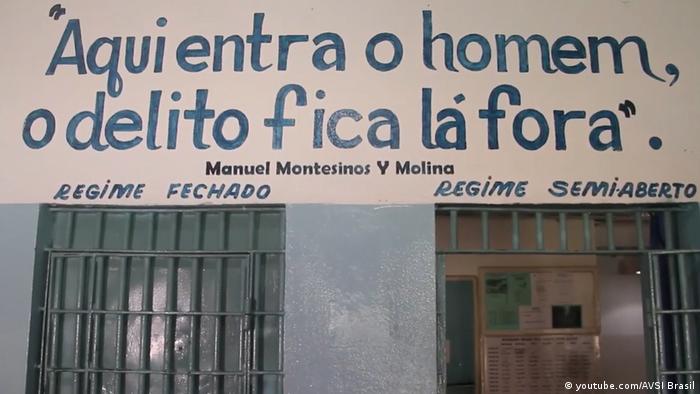 Ever since his release in 2016, he has looked back on his experiences with longing. It's not easy "outside," he says. Former convicts and their families are not treated with understanding by society, he lamented, saying that some customers had stopped going to have their hair cut in his mother's salon.

"Society always thinks that prisoners should suffer because they deserve it," he said. "But they forget that for every rehabilitated prisoner there is one less gun on the streets."

The number of legal firearms sold in Brazil has grown by 65% during President Jair Bolsonaro's time in office. He has loosened gun laws, saying it will increase security. But experts disagree.

Against the current: Brazil's dangerous militias

The criminal "militias" in Brazil are mostly made up of police officers who commit violent crimes and go unpunished in those areas which have been given up by the state. They control more than half of the country.

A Brazilian pulls himself out of crime