Brazil's government has made a deal to suspend a national truck drivers' strike that has caused food and fuel shortages. Subsequent fuel subsidies could see the state footing a bill of up to 5 million reals this year. 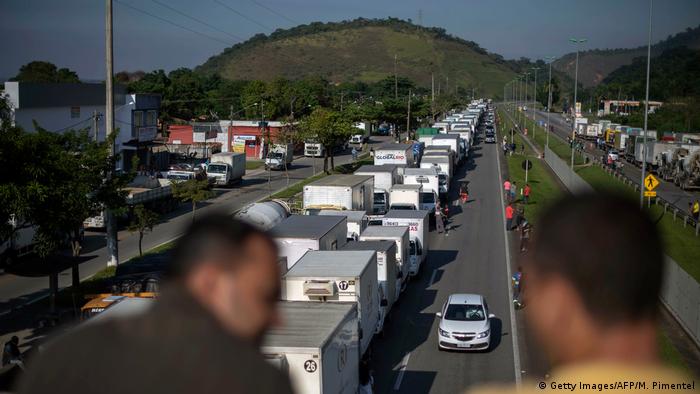 After seven hours of negotiations, the government agreed on Thursday to abolish at least one tax on diesel and introduce subsidies to maintain a temporary 10 percent fuel price reduction. In return, union heads agreed to suspend the truck drivers' strike action for 15 days, when the two sides are slated to meet again.

The deal puts a temporary hold on a nationwide truck drivers' strike that had paralyzed swathes of South America's largest economy.

"We need all of you truckers to get back to work. Brazil needs you," President Michel Temer's chief of staff, Eliseu Padilha, said while announcing the deal at the presidential palace in Brasilia.

The four-day protest over fuel price hikes had put a stranglehold on the movement of goods through the country, leading to severe food shortages and threatening airports and public transport. Prices for fruit and vegetables shot up by as much as 400 percent in some areas due to supply problems.

In the port of Santos near Sao Paulo — South America's largest port — no arrivals or departures of trucks were reported for three days.

According to union groups, as many as a million truckers took part in the strike action, blocking several main roads in 23 of Brazil's 26 states.

The strike action followed Temer's decision in late 2016 to grant Brazilian oil giant Petrobras autonomy over its pricing. This coupled, with an increase in the global price of oil in recent weeks, has seen a steady increase in fuel prices.

In a bid to diffuse the situation, Petrobras pledged to reduce fuel prices by 10 percent for 15 days — a decision that sent its shares plunging by around 14 percent.

Under the government's latest deal, Petrobras will extend its price cuts to 30 days with the state compensating it for costs beyond the initially announced 15-day period. According to Brazilian Finance Minister Eduardo Guardia, the price will be re-evaluated every 30 days, rather than on a daily basis.

Petrobras will be compensated by the state should the set price fall below the refinery price. Guardia said he expected this to cost the state around 700 million reals (€164,000, $190,000) per month until the end of the year.

In a statement, Petrobras said the accord was "highly positive and an unquestionable gain for the company."

The truckers' strike comes just five months ahead of Brazil's presidential elections. Center-right President Temer has been dogged by corruption allegations, while his efforts to pull the country out of its worst recession decades have so far only achieved modest results.