Amazon deforestation rose by 34.4% year-on-year in Brazil, the country's space agency INPE has said, revising its numbers based on satellite observation. The latest data does not include last year's forest fires. 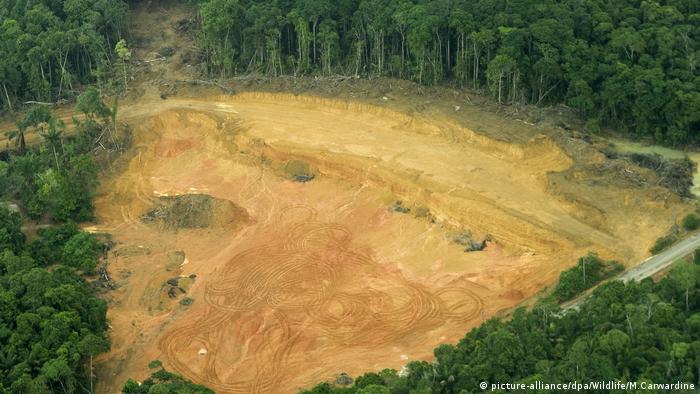 Brazil lost 10,129 square kilometres (3,911 square miles) of its rainforest between August 2018 and July 2019, the country's official space research agency INPE said on Wednesday. The latest satellite data also shows a rise of 34.4% compared to the same period a year before.

After analyzing the data, the agency revised its figures and raised its estimate by nearly 5% compared to an earlier report.

The area of Amazon felled between August 2018 and July last year is roughly equal to the nation of Lebanon by surface area — or roughly eight times the size of Rio de Janeiro. Researchers say this is the highest level of deforestation seen since 2008.

Many experts accuse the right-wing government of President Jair Bolsonaro of encouraging illegal loggers, gold miners, ranchers and land speculators to clear the forest. Bolsonaro has urged the development of the region, which plays a global role in absorbing CO2 from the atmosphere, as a way to lift it out of poverty.

Last July, after INPE data showed the scope of deforestation, Bolsonaro slammed it as a "lie" and accused the agency then-head Ricardo Galvao of "being at the service of some nongovernmental organization" and trying to besmirch his government. Galvaro was subsequently ousted as the head of the institute in August 2019. Just weeks later, Bolsonaro said forest fires "may have been initiated by NGOs" who wanted to cause problems in the country. He did not provide evidence and instead said the suspicion was based on his personal feeling. In November, Bolsonaro accused Hollywood actor and environmental activist Leonardo DiCaprio of "collaborating with the burning of the Amazon" by paying money to groups that, according to Bolsonaro, started the fires.

Bolsonaro deployed Brazil's military to protect the rainforest last month. The mandate for troops' deployment was set to expire later on Wednesday, but experts believe it would be renewed for at least another 30 days.