The "Alliance for Brazil" aims to fight "communism, globalism and any ideology that is against the natural order." The far-right leader is hoping to regain the trust of evangelical voters. 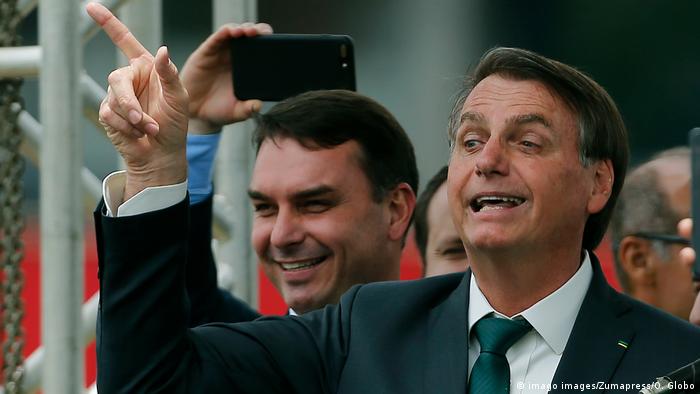 President Jair Bolsonaro announced the launch of his new political party at a ceremony in the Brazilian capital on Thursday.

Hundreds of supporters turned up outside a Brasilia hotel to listen to Bolsonaro's pledge to push forward Christian values and the fight against corruption at the first meeting of his Alliance for Brazil (APB) party.

The move comes after his declining popularity in the right-wing Social Liberal Party (PSL).

The APB revealed that Bolsonaro would head the party while his eldest son, Senator Flavio Bolsonaro, will be its first vice president.

"The results are showing, we have never had such low interest rates," Bolsonaro said to a crowd of cheering supporters.

The party platform "recognizes God's place in the life, history and soul of the Brazilian people," is anti-abortion, rejects "socialism and communism," and supports the right to possess firearms.

To compete in municipal elections next year, the new party must now collect 500,000 signatures by the end of April. The signatures must then be audited and certified by the Supreme Electoral Tribunal.

"It's a bit kamikaze what they're trying to do," said Daniel Falcao, a professor of electoral law at the University of Sao Paulo. "I don't think it's impossible, but it will take a lot of work to get the signatures in time and get them analyzed."

Why has Bolsonaro created his own party?

"What Bolsonaro is trying to create is a personal vehicle, which is very much in line with populist leaders in Latin America," Cas Mudde, a political scientist at the University of Georgia, told DW.

The president's move is still a risk. His decision to depart from the PSL and form a new conservative party threatens to further fragment his position in Brazilian politics.

It's the ninth time the 64-year-old has changed parties in his three-decade political career.

What does Bolsonaro stand for?

The retired military officer gained the support of conservative white evangelical voters to win last year's election on his promises to stop the legalization of abortion, gay marriage and the use of marijuana.

"Most of the time, the extreme right refers to the decline of the nation," said Mudde. "It is as if the nation is degenerating, something almost racial. Bolsonaro has a strong religious discourse, especially because of the role of the evangelicals, which explains his focus on 'moral degeneration.'"

Bolsonaro's relationship with PSL leaders has deteriorated in recent months as they fought for control over its substantial campaign funds.

However, he hopes a majority of the PSL's 53 lawmakers and three senators will follow him to his new party. He also hopes to mobilize his social media following to formalize the new party. However, under Brazilian electoral laws, the signatures have to be collected physically on paper.

Speaking to reporters, Bolsonaro said if the electoral court does not allow digital signatures, the APB will not compete in next year's campaign because there will not be enough time to gather the signatures and register the party.

A Brazilian Pentecostal congregation wants to buy the New Nazareth Church in Berlin. The building is for sale, but local politicians don't want the evangelicals to have it, saying they don't belong in the neighborhood. (14.09.2019)