The far-right Brazilian president has continued to militarize his government, recruiting a ninth military man to his Cabinet. Bolsonaro has largely relied on the military to marshal his agenda in Brazil. 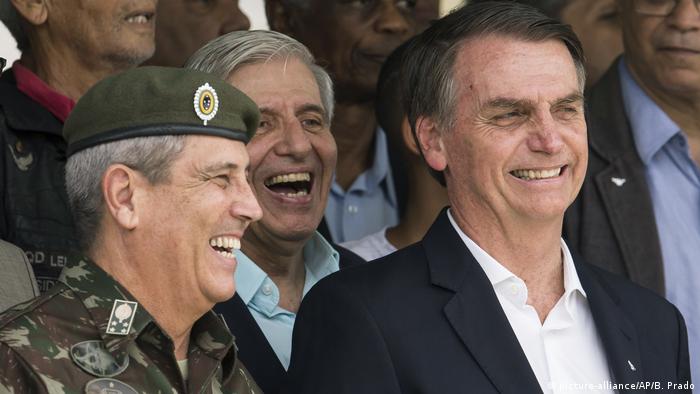 Brazilian President Jair Bolsonaro announced on his social media on Thursday that he has named four-star Army General Walter Souza Braga Netto as his new chief of staff.

Braga Netto, 63, is currently the army's chief of staff and its second in command. He is the second active-duty general in Bolsonaro's Cabinet after four-star Army General Luiz Eduardo Ramos, the secretary of government, and Air Force Lieutenant Marcos Pontes, Brazil's minister of science and technology.

Braga Netto is best known for leading a military takeover of security in Rio de Janeiro in 2018.

He replaces Onyx Lorenzoni, a longtime Bolsonaro ally and the last politician in his Cabinet's inner-circle. Lorenzoni will move to head the Citizenship Ministry, which handles federal welfare programs.

With the move, Bolsonaro now has nine military men in his 22-member Cabinet. That does not include Vice President Hamilton Mourao, a retired general.

Bolsonaro, a former Army captain, took office last year after winning Brazil's presidential election on a conservative platform. He vowed to break away from traditional parties, leaving the small Social Liberal Party that nominated him for president to form his own Alliance for Brazil movement.

The chief of staff job is one of the most influential positions in Brazilian politics. However, Bolsonaro has stripped the office of several key duties, including transferring a program responsible for drawing investment for the privatization of state assets to the Economy Ministry.