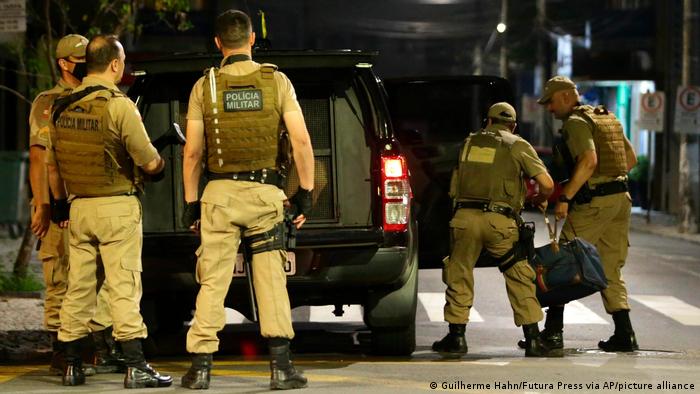 A group of heavily armed bandits carried out a coordinated attack on banks in the small city of Cameta in Brazil's northern Para state early Wednesday, local media reported.

Police cited in the reports said the assailants took at least 15 people hostage and exchanged fire with police as they targeted Banco do Brasil, Caixa, Santander and Banco do Para.

Residents of the city filmed the robbers clashing with police from their windows and posted the images on social media.

Officials told Globo News the assault ended in the early hours Wednesday, and that one person had died.

State Governor Helder Barbalho said on Twitter that authorities would "make every effort to restore calm and arrest the criminals as soon as possible."

Another bank heist in Criciuma

The attack on Cameta bore similarities to another raid on banks that was carried out early Tuesday in the city of Criciuma, in southern Santa Catarina state. In that assault, dozens of gunmen took over the streets and battled police for two hours, taking hostages as they attacked banks with explosives.

Anselmo Cruz, head of the Santa Catarina's police robbery and kidnapping department, told a news conference that the well-planned operation had involved 10 cars and at least 30 bandits armed with assault rifles.

"It was an unprecedented action for the state. There was never anything with this scope, this violence,'' Cruz said.

Cassio Thyone from the non-profit Brazilian Forum on Public Safety told the Associated Press that such brazen incidents targeting smaller cities with limited police resources have become more common over the past decade.

Officials have not said how much money the assailants escaped with.

Brazil's army has been given command of police by the president in the violence-wracked state of Rio de Janeiro. Human rights groups expressed concern about unacceptable killings.

A special deployment of Brazil's elite National Police Force has begun patrolling Ceara state in a bid to stop a major spike in violent gang attacks. The violence is a test for newly elected President Jair Bolsonaro.