Anti-government protesters are "outcasts, delinquents, and addicts," according to the Brazilian president. Jair Bolsonaro has threatened to call on security forces for an upcoming pro-democracy protest over the weekend. 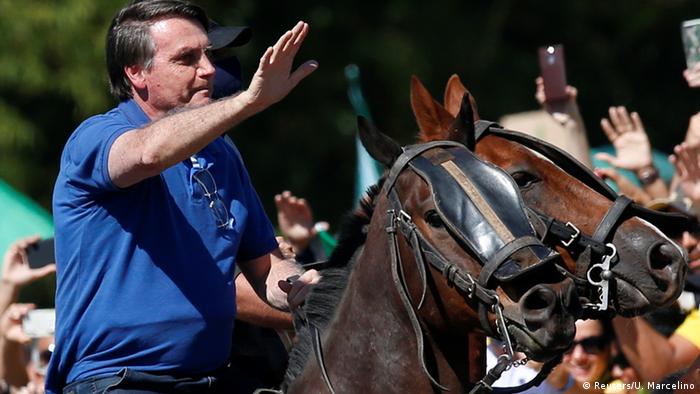 Speaking during the inauguration of a temporary hospital to treat coronavirus patients near the capital Brasilia, Bolsonaro appealed to his supporters to avoid the protests.

"People in green and yellow [colors of the Brazilian flag], who have God in their hearts, who think of their country, who are conservative, do not attend this movement. These people have nothing to offer. Bunch of outcasts. Many of them are addicts … they are not the majority of Brazilian society. They want turmoil, confrontation," he said in his weekly Facebook broadcast.

He also called the anti-fascist Antifa movement the "third wave" caused by the COVID-19 pandemic, right behind the health emergency and the economic crisis.

The former army captain added he expects the COVID-19 pandemic to rapidly decline and the economy to recover. As of Thursday, Brazil now has the third-highest coronavirus death toll in the world.

Anti-government protests organized by a Brazilian civil society group are scheduled to take place Sunday on the Avenida Paulista, one of Brazil's most popular avenues in the center of Sao Paulo.  More than 37,000 people have already registered their interest to attend the protests on Facebook.

"Next Sunday we will go to Avenida Paulista in the name of democracy. We will all be wearing masks and ensuring distance so as to not spread the virus. For life and against fascism. Here are the people without any fear of fighting!" posted the group Mais Democracia (More Democracy). The group added that they would "not let fascism grow in Brazil."

Bolsonaro appealed to parents not to let their children participate in the protests. According to the president, anti-fascist activism does not coincide with democracy.

"It is not because 'democracy' is written on a placard that the people behind it are defending democracy. They are there playing the role of a terrorist. Unfortunately, it's not classified as terrorism," Bolsonaro said.

"If you take 100 [young protesters] and put them on an ENEM [higher education entrance exam] test, most of them don't even get a five [grade]. They don't know how to interpret a text, they don't know anything, they're idiots who are useless," Bolsonaro added.