Talks between Syria's government and opposition have made little progress, UN-Arab League mediator Lakhdar Brahimi said. The delegations blame each other for violence that has killed hundreds across Syria in recent days. 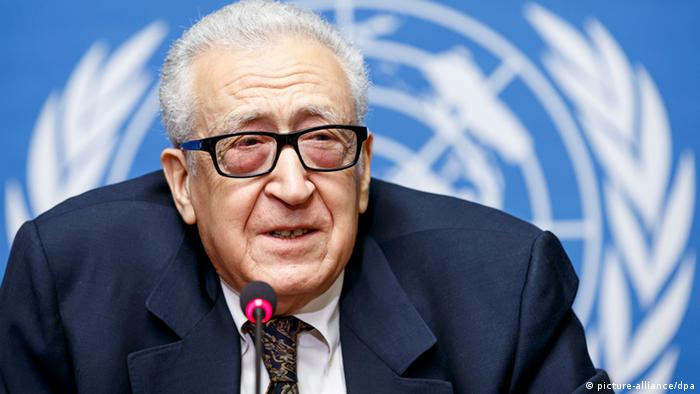 Brahimi (pictured) appeared frustrated Tuesday when discussing the current round of talks. The international mediator, who plans to meet senior Russian and US officials in Geneva on Friday, said he would report to UN Secretary General Ban Ki-moon and the Security Council within the next few weeks.

"The beginning of this week is as laborious as it was in the first week," Brahimi said at a news conference on Tuesday. "We are not making much progress. Of course, for it to really take off, we need cooperation from both sides here and a lot of support from the outside."

A previous round of talks wrapped up in January. Negotiators met face to face Tuesday as US and Russian officials prepared to join the stalemated peace talks in Geneva. The meeting broke up after three hours, with both sides saying the session had failed to produce an agreement - even on the agenda.

On Tuesday, opposition representatives also said they could announce no progress in the talks. Spokesman Louay Safi said the opposition delegation had asked to speed up the negotiations and accused the government team of "obstructing progress."

"These people are not here to come up with a political solution, but they're insisting on killing people in Syria to maintain the rule of the one person and dictatorship," Safi said. "I want to say to the Syrian people that we will not be here endlessly. There will come a time when it will become clear the regime does not want any solution and we will exert moral pressure on the UN to take a position."

On Monday, opposition delegates had said they would not return for a third round if the factions failed to achieve any agreement in the current session. "If there is no progress at all, I think it would be a waste of time to think about a third round," Safi had told reporters late Monday.

Opposition delegate Monzer Akbik said that his side had presented a paper outlining its "vision for the political solution in Syria" and that delegates could hold bilateral meetings with US and Russian officials on Friday. On Tuesday, UN officials confirmed the three-way meeting in Geneva planned for later this week and gathering Brahimi, Russian Deputy Minister of Foreign Affairs Gennady Gatilov and US Undersecretary of State for Political Affairs Wendy Sherman at the same table.

A resolution to increase aid in Syria has been drafted at the UN Security Council in New York. The resolution, drawn up by Australia, Luxembourg and Jordan, calls for unrestricted humanitarian access to civilians in dangerous zones of the country. If that is not granted within 15 days, the resolution would bring nonmilitary sanctions against individuals and entities responsible for the obstruction of aid deliveries.

The draft resolution expressed "outrage at the unacceptable and escalating level of violence and the death of over 136,000 people in Syria, including more than 11,000 children" since the conflict began in 2011. On Monday, however, council members Russia and China failed to attend negotiations on the draft resolution.

Russian UN Ambassador Vitaly Churkin said the country would veto the resolution if it were put to a vote. "Our approach is that we need to work pragmatically," he said. "If it's something which is useful, which will not be regarded by people as simply provocative but is something which is really aimed at improving the humanitarian situation, then I think it cannot be ruled out."

In the past three years, Russia and China have vetoed resolutions condemning Syria's government and threatening it with possible sanctions.