The EU and the US have accused Russia of violating international law by intervening in Crimea. DW examines the agreements that are supposed to govern relations between Moscow and Kyiv. 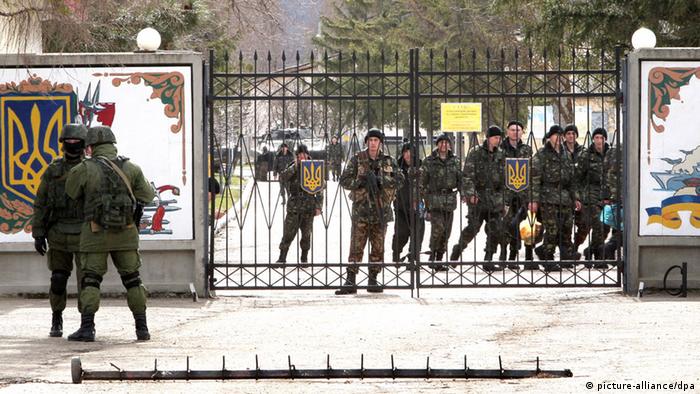 Pro-Russian troops have trapped Ukrainian forces in their military bases

As successor states to the Soviet Union, both Ukraine and Russia are signatories to the Final Act of the Conference on Security and Cooperation in Europe (CSCE). Adopted in Helsinki in 1975, the document sought to promote détente during an era of Cold War geopolitical tensions in Europe.

With the end of the East-West confrontation, the CSCE evolved into the Organization for Security and Cooperation in Europe (OSCE), the world's largest security forum. The OSCE has 57 member states, including Russia and Ukraine.

The Final Act obligates its signatories to "refrain…from the threat or use of force" against each other. According to the act, participating states "regard as inviolable one another's frontiers" and "will refrain now and in the future from assaulting those frontiers." They "will respect the territorial integrity of each of the participating states" and "will likewise refrain from making each other's territory the object of military occupation."

As a constituent part of the Soviet Union, Ukraine hosted large stockpiles of nuclear weapons during the Cold War. When Kyiv gained its independence from Moscow in 1991, it briefly became the third largest nuclear power in the world.

In order to prevent nuclear proliferation, the United States and Great Britain struck a deal with Russia and Ukraine to eliminate the latter's atomic weapons stockpiles. Under the 1994 Budapest Memorandum, Ukraine agreed to transfer all of its nuclear arms to Russia.

In exchange, Russia, the US and the UK reaffirmed "their obligation to refrain from the threat or use of force against the territorial integrity or political independence of Ukraine." They also agreed "to seek immediate United Nations Security Council action to provide assistance to Ukraine….if Ukraine should become a victim of an act of aggression or an object of a threat of aggression in which nuclear weapons are used."

The 2014 Crimea crisis is only the latest and most severe outburst of intermittent post-Soviet tensions on the peninsula. During the 1990s, Moscow and Kyiv faced off numerous times over the political status of Crimea and control of the Black Sea Fleet stationed at Sevastopol.

In order to calm tensions, Moscow and Kyiv signed the bilateral Treaty of Friendship, Cooperation, and Partnership between Ukraine and the Russian Federation in 1997. Under Article 2, the neighbors agreed to "respect each other's territorial integrity, and confirm the inviolability of the borders existing between them."

The Friendship Treaty also ensures "the protection of the ethnic, cultural, linguistic, and religious originality of national minorities on their territory" and the creation of "conditions for the encouragement of that originality." Although not stated explicitly, this passage presumably refers to the large Russian minority in Ukraine as well as Ukrainian communities in Russia.

When Soviet Premier Nikita Khrushchev transferred control of Crimea to Kyiv on the 300th anniversary of Russian-Ukrainian unification in 1954, he had no way of knowing that his decision would bring the two neighbors to the brink of war more than six decades later.

After the collapse of the Soviet Union, Russia and Ukraine faced the contentious problem of how to divide the Black Sea Fleet stationed at Sevastopol. Both Moscow and Kyiv claimed the Soviet-era fleet as their own. Some former Soviet sailors remained loyal to the Kremlin, while others declared their allegiance to newly independent Ukraine. The divided Black Sea Fleet sailors nearly came to blows several times during the 1990s. 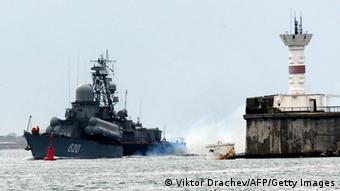 Ultimately, Russia and Ukraine signed three agreements in 1997 governing the status of the Black Sea Fleet. The fleet was divided between Kyiv and Moscow, with the Kremlin receiving most of the warships. In exchange, Russia paid Ukraine's cash-strapped government $526 million in compensation. Kyiv also agreed to lease Crimean naval facilities to the Russian portion of the fleet for $97 million annually. The leasing agreement was renewed in 2010 and expires in 2042.

Under the agreements, Russia was permitted to station a maximum of 25,000 troops, 132 armored combat vehicles and 24 pieces of artillery at its military facilities in Crimea.

But these military forces were required to "respect the sovereignty of Ukraine, honor its legislation and preclude interference in the internal affairs of Ukraine." Furthermore, Russian military personnel had to show their "military identification cards" when crossing the Ukrainian-Russian border. And Russian forces could operate "beyond their deployment sites" only after "coordination with the competent agencies of Ukraine."

Russian officials in the annexed Crimean Peninsula say air defenses have been activated at least twice to intercept drone attacks. One of them targeted the headquarters of Russia's Black Sea Fleet in Sevastopol – a second such strike in less than a month.