Both Major Parties Pleased With Talks | News and current affairs from Germany and around the world | DW | 28.09.2005

Both Major Parties Pleased With Talks

Both the social democratic and the conservative parties called Wednesday's talks "fruitful" and "serious". But added they were still not ready to formally negotiate, or decide on a chancellor. 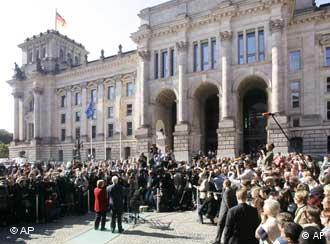 Talks, but no formal negotiations - yet

Visibly tired, but satisfied, representatives of Germany's two major parties appeared before cameras Wednesday night after a long day of talks they said focused on the economic challenges facing Germany.

Chancellor Gerhard Schöder and Social Democratic Party leader Franz Müntefering told reporters they were happy with the day's discussions, seen by some as a precursor to negotiations for a coalition govenrment of Germany's two largest parties. Schröder said the closed-door session focused on content, and not whether Angela Merkel would replace him should they form a so-called grand coalition.

"To discuss personnel questions during a phase like this is politically wrong," Schröder said.

The two sides agreed to continue talks, but not coalition negotiations, next Wednesday. With each week, the intensity of the campaign has seemed to ebb from Germany's leadership discussion, something Merkel addressed in her asnwers to reporter's questions.

"I was pleasantly surprised that we were able to discuss the matters at hand, only 10 days after such a campaign," she said.

Only Edmund Stoiber, head of the Christian Social Union, mentioned the touchy question of who would lead Germany. Though both sides said they didn't discuss it during the meetings, Stoiber said he hoped "that the SPD accepts Mrs. Merkel's leadership claim."

SPD General Secretary Klaus Uwe Benneter stessed in an interview with ZDF public telelvision ahead of the talks that his party would stick behind Chancellor Schröder. But CDU steering committee member Hildegard Müller insisted that as the strongest party, the Union should -- and would -- lead the government. 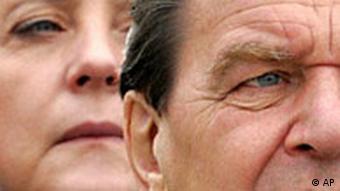 Meanwhile, Norbert Röttgen, parliamentary spokesman for the conservative Christian Democratic Union, told the Berliner Zeitung on Wednesday that there are four major challenges facing a grand coalition government. These are reorganizing the budget, changing the structure of health care and nursing care insurance, tax reform, and federalism.

In addition, he cited "altering the relationship between the citizen and the state;" in other words, reducing bureaucracy.

"A grand coalition can address unpleasant questions that have not been resolved by the policies of the last 15 years," Röttgen told the paper.

Speaking to ZDF, the SPD's Benneter agreed these points will also be addressed in the exploratory talks. Moreover, he said, the SPD wants to seek out common ground with the CDU. 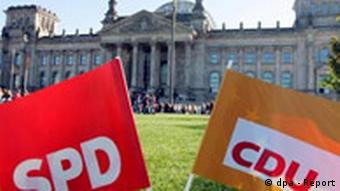 To achieve this, both parties should compare their election platforms, "and then we will see where we can successfully work together," Benneter said. But he reiterated that the main objective is to form a stable government.

In terms of a timeline, Röttgen said he believes a new government can be formed in October -- assuming the chancellorship question is resolved. After a delayed vote is held in Dresden on Oct. 2, Schröder has to quickly give up the notion of remaining chancellor, Röttgen told Berliner Zeitung.

"We can do it if (Chancellor Gerhard) Schröder comes to his senses quickly," he said.

The CDU's Müller told ZDF: "(The SPD) will simply not be able to continue as they have until now with the Union." 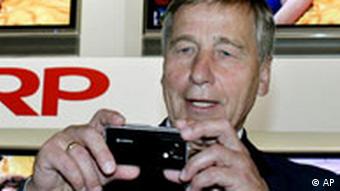 On Tuesday, Economics Minister Wolfgang Clement (photo), one of the SPD's chief negotiators, warned that setting conditions for the bi-partisan talks was counterproductive.

"I don't think it's wise to start the discussions by stating pre-conditions," he said.

As for CDU leader Merkel, "she must accept that she is short of a majority in parliament with only 45 percent of the deputies supporting her," Clement said. "These talks can only be successful if both sides agree that none has won the election and that both sides need to cooperate for the sake of a stable government."

These days, the eastern German city of Dresden is the place to be: Politicians, pop stars and athletes, not to mention an entire philharmonic orchestra, are flocking to the city where entertainment meets high politics. (Sept. 27, 2005)

Election 2005: The Other Perspective

DW-WORLD has asked English speakers for their perspective on Germany today. Some have lived here for years, others only visit the country occasionally for business reasons. Some seriously critique the way things are run in Germany while others decided to take a lighter approach. Read the answers to DW-WORLD's questionnaire.

Read about Germany's general election and the latest developments in its unexpected aftermath, in DW-WORLD'S election dossier.