Bosnian Salafists movement on mission to recruit | World | Breaking news and perspectives from around the globe | DW | 30.01.2014

Radical Salafists from Bosnia-Herzegovina are among those who fight in Syria's civil war. Recently, they have stepped up efforts to recruit young people to follow suit. Experts say war returnees are especially dangerous. 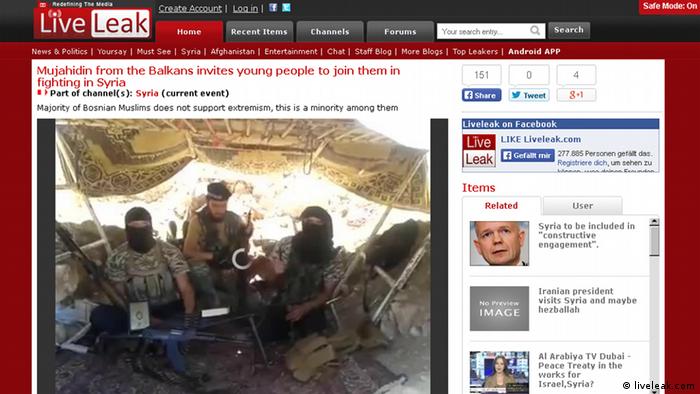 The footage of this Internet video is unsettling and disturbing: Three armed men sit at a makeshift shelter where they are protected from the blazing sun. Two of them wear masks and viewers can only make out their eyes. The third man's face is pixelated.

They carry Kalashnikov assault rifles and Qurans on their laps. The man speaking calls on the Bosnian youths to "join Allah on the path to jihad in Syria" where Muslim men are allegedly abused and Muslim women raped. One couldn't sit at home and do nothing, the spokesman says in clear Bosnian.

The total number of radical Muslims from all of the Western Balkans who went to war in Syria is expected to be much higher. Intelligence agencies estimate another 140 Salafists have travelled to Syria.

Ideology not rooted in Bosnian tradition of Islam

However, a strict and conservative interpretation of the Quran, which is typical for the Salafism and Wahhabism ideology, is not rooted in the Bosnian-Herzegovinian tradition of Islam. The majority of Bosnian Muslims, also often called Bosniaks, are Sunnis and belong to the Hanafit school. This religious school is regarded as very progressive and open.

"That's also because they stand in the long tradition of living together with Orthodox and Catholic Christians in one nation," Hecimovic said. Sephardic Jews have been living in Bosnia-Herzegovina for centuries as well.

But the war at the beginning of the 1990s changed this for the worse in Bosnia-Herzegovina: In light of persecution and prolonged sieges, some Bosniaks began a process of radicalization. At the same time, fundamental Muslims from abroad started to flock to the country - often from Arab countries. It's estimated that a total of 2,000 fighters came over - some of them are said to have had ties to Osama bin Laden.

"On the one hand, they were fighters who wanted to help defend Muslims. On the other hand, they were employees of different aid organizations or at diplomatic missions or cultural foundations," said Igor Tabak, a security expert at Croatian online portal Obris.org. They brought along different views on Islam and helped spread these religious interpretations.

After the Dayton Agreement - the General Framework Agreement for Peace in Bosnia and Herzegovina, which was signed in winter of 1995 - and after the Cold War had ended, some of these Islamists stayed in Bosnia and obtained Bosnian passports. They started recruiting young people, built new mosques with the help of Saudi foundations with the sufficient funds and dedicated themselves to spreading the ultra-conservative branch of Sunni-Islam - Wahhabism. 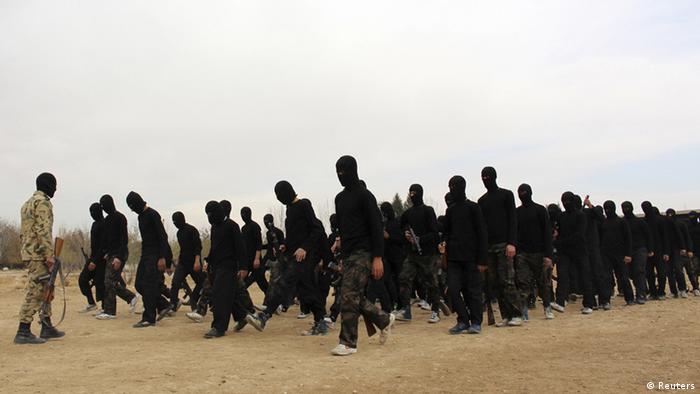 Their work paid off, said Tabak. It has led to a cultural change within society as religion is much more present in everyday life. Some citizens observe holidays that wouldn't have been celebrated in the past. Today, women in a hijab are common on the streets. The perception of Islam's role in society has changed, Tabak said.

Especially in the post-war years, radical Salafist groups tried to gain influence on the Islamic Community in Bosnia-Herzegovina (IZ BiH). They wanted to control several mosques and push preachers to announce that their conservative reading of the Quran was the "only true" interpretation. After several conflicts where the government supported the Islamic Community, the Salafists left the mosques.

That helped reduce their direct influence on the public; however, it also cut all communication, said Hecimovic. That also limited the possibility to influence them, which is a security problem, he added.

Salafists returning from war in Syria are especially dangerous. They have been trained in combat, have radicalized even further and are connected with other fighters all over the world, said security expert Tabak. 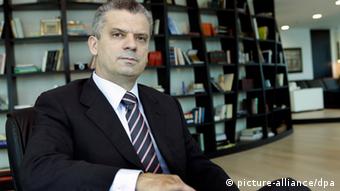 Interior Minister Radoncic might be on the Salafists' hitlist

First and foremost, this is a problem for the Western Balkan region: "There are fears that returnees could train terrorist groups which then target individual politicians or critical journalists," Hecimovic said who himself has been the extremists' target.

High on a list of potential targets is Bosnian-Herzegovinian Interior Minister Fahrudin Radoncic. He initiated a law which makes it illegal to participate in or recruit others for a war abroad. Serbia is looking into enacting a similar law.

But the returnees are also a problem for all of Europe, Tabak said. "It's a serious and realistic problem that's very difficult to tackle," he said. It is understandable that European security bodies are quite concerned about this, he added.

The number of Salafists in Germany is growing. Charismatic preachers successfully recruit young men. The ‘signpost’ project in North Rhine-Westphalia aims to prevent their radicalization. (06.12.2013)

Salafists are looking to lure followers at an event in Frankfurt this weekend. In response, right-wing groups plan to hold anti-Islam rallies. Do both sides need each other? (06.09.2013)