Even without Erling Haaland, Borussia Dortmund scored plenty of goals. The victory sets up a defining final for those involved, but also highlights the cost of pandemic football. 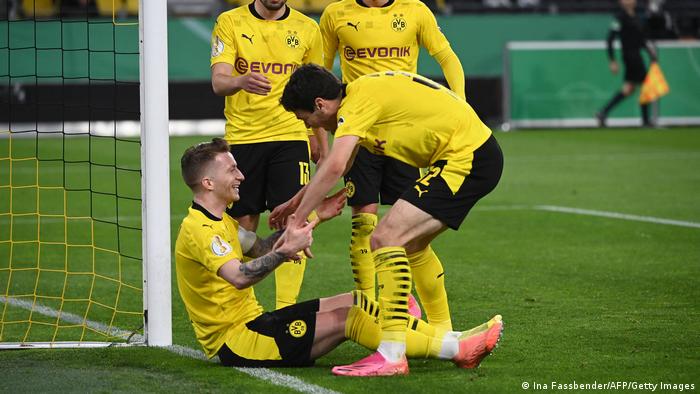 Borussia Dortmund were in full flow against Kiel

Borussia Dortmund's swift dismantling of second-division side Kiel showed the Bundesliga club can score plenty without Erling Haaland, who missed out due to injury. It also revealed what playing through a pandemic can cost a team.

Even before Gio Reyna scored two in seven minutes it was clear this was not the Holstein Kiel that threw Bayern Munich out of the German Cup in dramatic fashion. In the midst of a promotion push and a famous German Cup run, Kiel has had to contend with two 14-day quarantines enforced by COVID-19 outbreaks in the team.

Marco Reus squeezed in a third after superb sense and skill to set up Reyna's second. A defensive error allowed Thorgan Hazard a clean run at goal and there was even time for a deflected Jude Bellingham goal.

Dortmund's quality showed, but given Kiel emerged from their latest quarantine just seven days ago and have already played two league games tired legs were to be expected. They even lost Janni Serra to injury inside the first half an hour.  In the six days following this defeat Kiel have two more games.

"I don't feel disappointment, but rather sadness," Holstein Kiel's vice president Uwe Stöver said at halftime. At full time, Werner spoke a lot of disappointment but was also quick to stress how proud he was his side that they had made it this far. 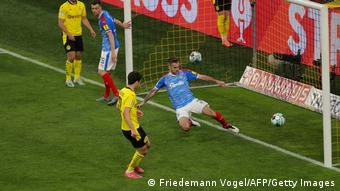 Having disappointed on a few too many occasions this season Dortmund enjoyed the chance to ease into their first German Cup final since 2017. The second half passed with a handful of substitutions, a braver and more solid Kiel and a lot less movement from both sides. A bad looking knee injury to Mateu Morey overshadowed the victory.

"It feels good to know we're going to Berlin, but the celebrations are dampened. It hurts us. He's a good lad," Emre Can told Sky afterwards when asked about the injury. Marco Reus and Edin Terzic added similar sentiments.

The cloud that hung over Borussia Dortmund for most of the season was their inability to challenge Bayern Munich for the Bundesliga title. Now, under interim head coach Edin Terzic, Dortmund are in their first cup final in four years and still have a chance of qualifying for the Champions League. Suddenly the next few weeks of the season are looking just as important for Dortmund and Terzic as they are for Julian Nagelsmann and Bayern Munich.