Emil Fosberg's 120th minute winner sent RB Leipzig to the German Cup final in dramatic fashion against Werder Bremen. Coach Julian Nagelsmann will have a chance to make history for his club and himself in the final. 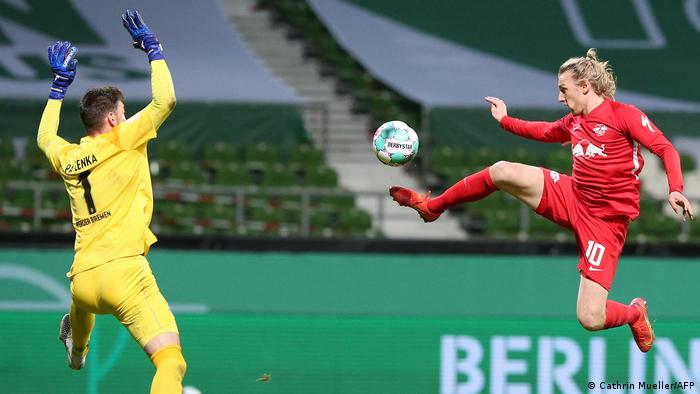 It's been quite the week for Julian Nagelsmann. He started it as coach of RB Leipzig and ended it as the youngest coach in Bayern Munich's history. But before he makes the move to Bavaria, there's the small matter of making history with his current club. They reached the final, but the manner of their victory could barely have been more dramatic, with Emil Forsberg striking in stoppage time of Extra Time as penalties loomed large.

Nagelsmann didn't expect his team's trip to Bremen to be quite this difficult, but his Leipzig side's fighting instincts got them over the line – and he will now have the chance to make history with his current club before heading to Munich for his big adventure.

Leipzig have caused a big stir in German football since their inception in 2009, but one thing they've not yet been able to achieve is getting their name engraved on any of Germany's major trophies. Less than a week before their 12th birthday, Nagelsmann will take his team to Berlin's Olympic Stadium to break their duck. It will also be a chance for Nagelsmann to also win his first trophy, and it will mean a lot to Nagelsmann to go to Bayern as a bonafide winner. There will be a lot on the line when Leipzig face Borussia Dortmund on May 13. 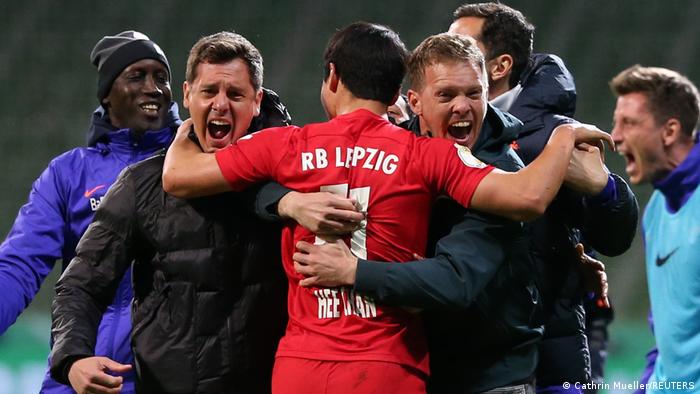 The win meant a lot to Nagelsmann, who will leave Leipzig for Bayern next month.

This frantic game ebbed and flowed, and while Leipzig were the slicker of the two teams, Bremen were in the game from the first minute to the last. Bremen were awarded a penalty at the end of the first half when the former Leipzig striker Davie Selke tangled with Nordi Mukiele in the box. The penalty was given but reversed after a lengthy VAR check.

Leipzig created more chances after the break but, as has so often been their weakness this season, could finish them. Willi Orban struck the bar with a towering header, and Mukiele was denied by Jean-Manuel Mbom's brave clearance on the line. Then Christopher Nkunku found space in the box but his shot was expertly palmed onto the post by Jiri Pavlenka from point-black range. It wasn't the only fine save made by the Czech on the night.

Sting in the tail

Nagelsmann threw on Hee-Chan Hwang and it was this change that unlocked the game. The South Korean's tidy finish three minutes into Extra Time triggered an absorbing extra 30 minutes, and Leipzig would have been forgiven for thinking they'd done enough to score the only goal of a game high on energy and heart, but lacking in attacking quality.

The game took another twist though when Dayot Upamecano, another Leipziger who will find himself in Bayern colors next season, completely misjudged the flight of the ball to let in Leon Biitencourt, and with Leipzig goalkeeper Peter Gulacsi already committed, Bittencourt rounded the Hungarian and drilled in the equalizer.

But the final sting in the tail of this helter-skelter game was to be felt by Bremen, when another subsititute, Emil Forsberg, a man brought by Nagelsmann with penalties in mind, popped up with a late winner from close range. The assist came from Hwang and Nagelsmann's substitutions had swung it.

The dream of silverware is alive, for Leipzig and Nagelsmann.