Borussia Dortmund supporters have called for a boycott of the club's Monday night home game against Augsburg in protest at "absurd" kickoff times. Elsewhere, Hannover fans marched in favor of the 50+1 rule. 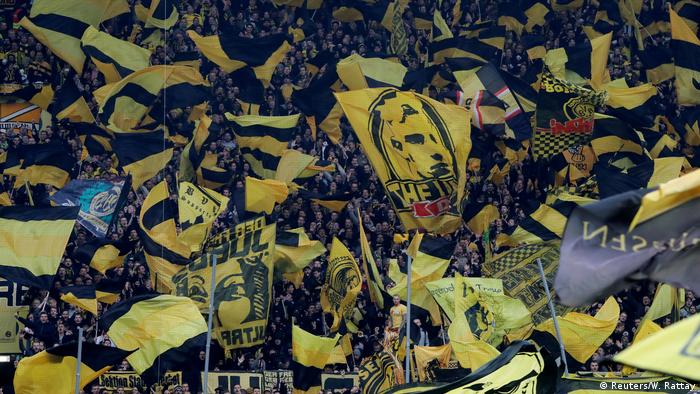 The first half of the 2017-18 Bundesliga season was marked by significant protests in the stands as supporters voiced their displeasure at the increasing commercialization of the game.

Now, as the second half of the season gets underway, the protests are set to continue as another unpopular novelty arrives in Germany's top flight: Monday night football.

In June 2016, the German Football league (DFL) announced that five Bundesliga matches in the 2017-18 season would take place on Monday nights and the first three have now been scheduled: Eintracht Frankfurt vs. RB Leipzig (19.02), Borussia Dortmund vs. Augsburg (26.02) and Werder Bremen vs. Cologne (12.03).

According to the DFL, the new Monday night slot is to give Europa League teams an extra day of rest, but many supporters believe it is purely for the benefit of television broadcasters and viewers and shows no regard for fans who actually attend matches to support their team. 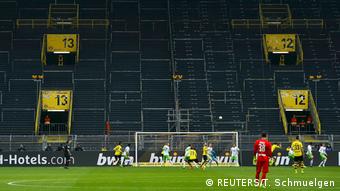 'Football lives in the stadium — not on television!'

“We have regularly taken part in nationwide protests against the introduction of Monday night games in the Bundesliga," said a statement by the Bündnis Südtribüne Dortmund, an alliance of Dortmund fan clubs. "Now, the border of what is acceptable has been crossed and we will no longer be part of these absurd kickoff times.”

“The introduction of Monday night games in the Bundesliga is yet another step in the selling-out of football … which only serves the profit-making interests of clubs, associations and broadcasters,” the Dortmund fans continue, pointing the finger at their own club too.

"Unfortunately, BVB are no exception," said the statement. "When new sources of money beckon, they are clearly happy to forget their responsibility towards their own fan base."

The Bündnis Südtribüne Dortmund includes 2,261 individual members and 38 fan clubs, including the three main vocal ultra groups who are responsible for the breathtaking atmosphere and choreographies on the famous Yellow Wall. With other, non-affiliated fan groups joining the boycott and other fans simply unable to attend a match on a Monday night, insiders believe up to 10,000 fans could miss the game.

"The Bundesliga loves to present itself with its atmospheric terraces and sold-out stadia," continued the statement. "But when matches are scheduled at times when no one can make it, it reveals the incredible indifference towards the social importance of football and the fans who make the game what it is. Kickoff times must fit around the fans! Football lives in the stadium — not on television!"

Former Borussia Dortmund player Kevin Großkreutz has lent his support to the protest. "Our football must not be lost. The fans are football and, as a player, I stand behind the protest," said the World Cup winner. "It will only work if we stick together. What has happened in England and other countries shouldn't be allowed to happen here. The fans have been totally forgotten." 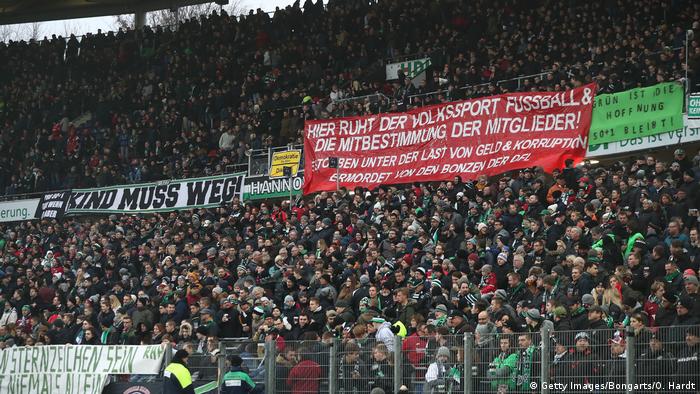 "Kind must go!" Hannover fans have been protesting all season

Elsewhere, Hannover supporters began 2018 with a demonstration in favor of German football's 50+1 ownership rule and against the proposed takeover of their club by investor Martin Kind.

Thousands of fans marched through Hannover city center ahead of the team's 3-2 victory over Mainz after campaign group ProVerein1896 submitted a 50-page dossier to the DFL detailing why they believe local hearing-aid entrepreneur Kind doesn't fulfill the necessary require criteria to take over a majority stake in the club.

Hannover's ultra groups have been refusing to provide vocal support at matches this season after Kind, who claims to have supported the club financially for 20 years, a claim disputed by ProVerein1896, applied for an exception to the 50+1 rule.

A banner inside the HDI Arena read: "Here lies the people's game and the participation of the membership, killed by the burden of money and corruption, murdered by the DFL fat cats."