After several days of extreme power shortages in the Gaza Strip, Gaza’s power plant reportedly restarted on Thursday. But people fear this is only a temporary solution to the ongoing power problems. 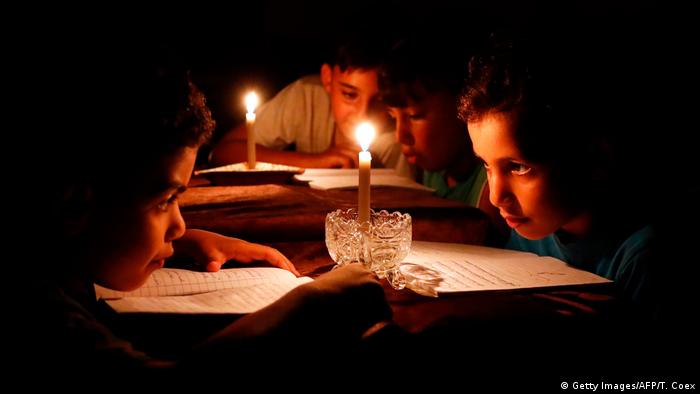 Sweltering in the summer heat, people in the besieged Gaza Strip face yet another crisis. The bitter political feud between Gaza's Hamas rulers and its rival in the West Bank, the Palestinian Authority, has escalated leaving 2 million people with less than a few hours of electricity per day.

Power supply has been extremely scarce since Gaza's only power plant was shut down after running out of fuel two months ago. The tiny enclave has been left solely dependent on a few hours of electricity supplied by Israel and Egypt.

It is alleged that Egypt and Hamas have reached an agreement to deliver fuel to the blockaded territory. But while recent images of diesel tankers from Egypt driving through the Rafah border crossing may have brought some relief for Gaza's 2 million residents, many are wary that this will be another temporary and inadequate band-aid solution.

"The situation has gone from bad to worse. If only our so called leaders in Gaza and the West Bank considered the interest of their people," says Maisa Sultan, rushing to turn on the washing machine  in her flat in Jabaliya, a neighborhood in Gaza City.

On this blisteringly hot day, the electricity has just come on. The young mother of five struggles to get everything done during the brief window when power is available: Washing, getting drinking water, taking a shower, switching on the fridge.

"Even if I have a doctor's appointment, I run home as soon as there is electricity." Like everyone else in Gaza, she has to plan her day carefully: Sometimes there is power at night, sometimes in the early morning. Today, she has to make do with only three hours of electricity. 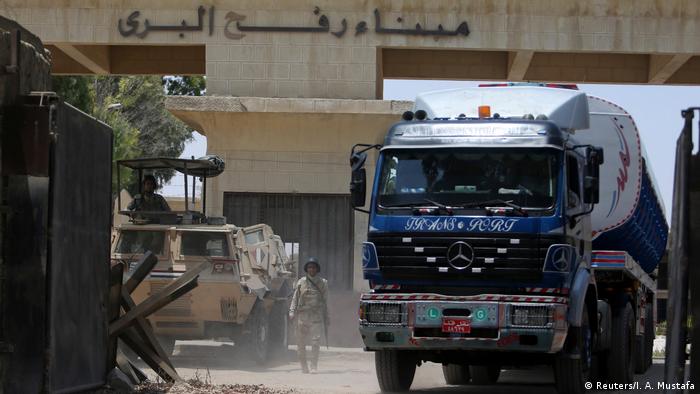 Like most people, during times of complete power outage, she relies on batteries to power LED lights in the evenings. Other households run fuel-powered generators for a few hours a day. Those who can afford it have installed solar panels.

Despite the ongoing hardship, most take the situation with the typical Gazan sense of patience - because there is no other choice.

"From what I hear, many people want, at least, to go back to the schedule of eight hours of electricity per day that we had a few months ago," says Maisa Sultan, who works in an NGO. "That's what we've come to – we can't even imagine having electricity like other places around the world."

In his office at the World Health Organization in Gaza City, Mahmoud Daher calmly explains the consequences for the already strained health sector. "We are really very concerned about the situation. The health care system is totally dependent on electricity," says Daher.

Most state-run hospitals rely on generators when there is a power outage, but "at the moment, hospitals are operating on demand only," he says. For now, it is estimated that funds for the generator fuel will last until mid-July. 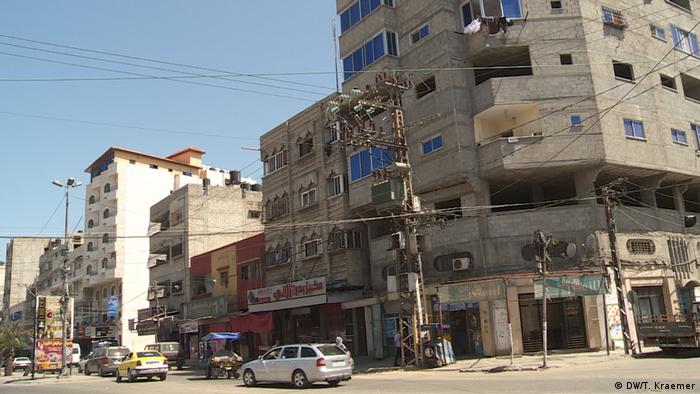 In the past two months, Gaza's 2 million residents only received three to four hours of electricity per day

Gaza's 2 million people have had to live with chronic blackouts for many years. But the current crisis erupted after the Palestinian Authority imposed hefty fuel taxes on the fuel being bought for the power plant.

Gaza's sole power plant had to be shut down in April after emergency funds from Turkey and Qatar were exhausted. This left the Hamas-controlled territory solely reliant on electricity supplied by Israel and Egypt. Israel's supply covers around 25 percent of Gaza's needs. Since then, residents have lived with 4 to 5 hours of electricity daily.

In a move to further pressure the Islamist group to relinquish control of Gaza to the Palestinian Authority, Palestinian President Mahmoud Abbas then asked Israel to cut its electricity supply to the region.

This week, Israel heeded the call despite warnings that the move could worsen the already tense situation. This has left people with barely two hours of power per day. Israel's prime minister, Benjamin Netanyahu, described the crisis as an "internal Palestinian dispute."

Warning calls of an imminent humanitarian crisis by the UN's Mideast envoy, Nickolay Mladenov, did not have any impact on the warring sides. Both Fatah and Hamas continue to blame each other for the situation.

"Since 2007, when Hamas carried out its coup in Gaza, the Palestinian Authority has been paying for Gaza's electricity," says government spokesperson Tareq Rishmawi in Ramallah to DW.  "Hamas has to accept the president's initiative and return the government institutions to the national consensus government."

Shortly before the current crisis, Hamas reportedly formed an administrative committee to run government affairs in Gaza. It was the latest chapter in the bitter political feud.

Pressure on Hamas increased due to the current problems being faced by its main sponsor, Qatar. The small Gulf state has come under pressure from its Arab neighbors, who have called on Qatar to distance itself from Islamist groups that it is accused of supporting in the region.

Since the 2014 Israel-Gaza conflict, Qatar has often paid for roads, hospitals and salaries in Gaza, as well as helping to purchase fuel for the power plant.

"People should speak out against those who stand behind the siege and stand steadfast in this crisis," says Hazem Kassem, spokesperson for Hamas. 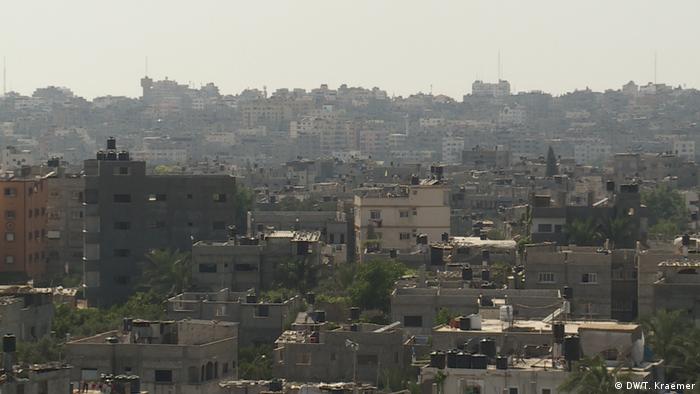 At this stage, calls for steadfastness might sound unreal to many people, who have stoically weathered hardships since Hamas seized power in Gaza ten years ago.

Israel and Egypt have imposed a near total closure of the tiny territory ever since, preventing people from traveling abroad. The economy has been shattered and unemployment has reached over 40 percent. Internally, Hamas keeps a tight grip on the territory. In the streets, people feel caught in the ongoing power struggle.

"People are really tired, they are exhausted, and economically speaking everything is going down the drain," says Ahmed Abu Hasira, a Gazan resident who is running errands on Omar Al Mukhtar Street.

Another passer by, who declined to give his name added: "Let them shut down everything, enough is enough!"

Anger is mounting, but any criticism of Hamas or the Palestinian Authority is carefully worded and mostly kept private.

"I can't see my future here anymore, we can't see further than one step when the lights go off," says Amer Balousha, a young man who went out to protest in January against the electricity crisis.

The protest had also turned against Hamas and the three young organizers were arrested and later released after reportedly having to sign pledges not to be active again. One of them has been recently re-arrested for his activities on social media. 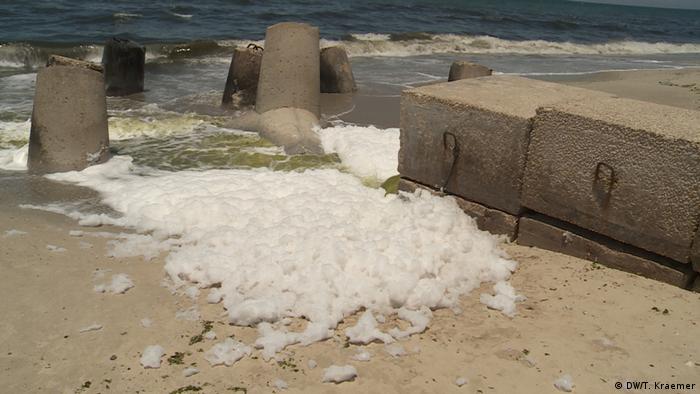 Due to the electricity shortage, Gaza's mostly untreated sewage spills mostly into the Mediterranen Sea

To escape for a few hours from Gaza's multiple problems, many people flock to its white sandy beaches along the coast during summertime. But the power crisis makes its presence felt even here. Along the coast, raw sewage is emptied into the sea from Gaza's sewage network.

"We are talking about 100 000 cubic meters of untreated or partially treated sewage that flows directly into the sea currently," says Farid Ashour from Gaza's Coastal Municipalities Water Utility, who has monitored Gaza's sewage problems for many years.

Sewage treatment has always been problematic in the coastal territory due to the ongoing blockade, but "with the ongoing electricity crisis, it will get worse, as pumping stations cannot keep up with the pressure."

The environmental pollution does not stop at Gaza's borders and might end up affecting Israel. But in Gaza, despite the health warnings, people go swimming anyway.

Fifty years on and Israeli occupation continues. Peace is stalled. Elections delayed. Why, after so long, have the Palestinians achieved so little? Tim Sebastian meets Nabeel Shaath, adviser to the Palestinian president. (14.06.2017)

Struggling to survive in Gaza's ruins

After five weeks of war, the destruction in Gaza has reached almost apocalyptic proportions. The clinics can no longer treat people; electricity and power are scarce - people are fighting to survive. (14.08.2014)