Struggling to survive in Gaza′s ruins | World | Breaking news and perspectives from around the globe | DW | 14.08.2014

Struggling to survive in Gaza's ruins

After five weeks of war, the destruction in Gaza has reached almost apocalyptic proportions. The clinics can no longer treat people; electricity and power are scarce - people are fighting to survive. 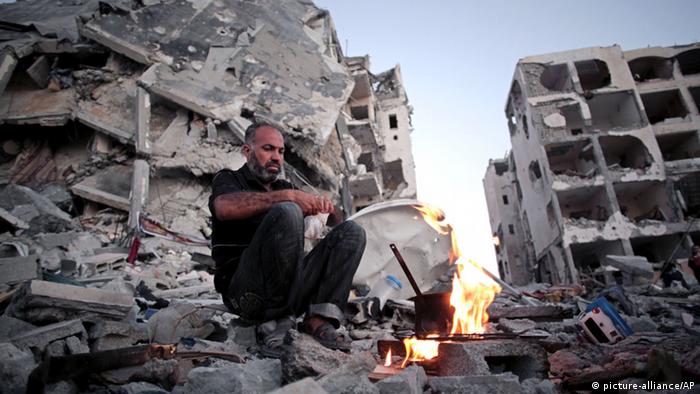 The sandy coastal strip with its 1.8 million inhabitants is just a bit over 12 kilometers wide at its broadest point. Here in the north, it's but half as wide. Google Earth's route planer calculates 18 minutes for the drive from the Mediterranean Sea to the Israeli border.

That, however, is theory. You can't drive along that stretch, because huge mounds of debris and rubble block passage everywhere.

People make their way across the ruins, climbing over rubble and broken concrete. They are looking for anything usable, for mementos. Everything is full of dust that clings to every fold of clothing and turns all shoes grey. A stench of decay is in the air, as corpses and animal cadavers are still trapped underneath the rubble.

This is Gaza after five weeks of war. The narrow, overcrowded strip of land lacking in resources has long been a poorhouse, a miserable region where people live in confinement and isolation.

Today, some places look like they have also been hit by an earthquake. But this is no natural disaster. The destruction is man-made, launched according to plan, Raji Sourani says.

"That's been our observation from day one," the lawyer and human rights activist says. "We concluded that in a very deliberate and intentional way, civilians were the target." They were, he adds, in the "eye of the storm." 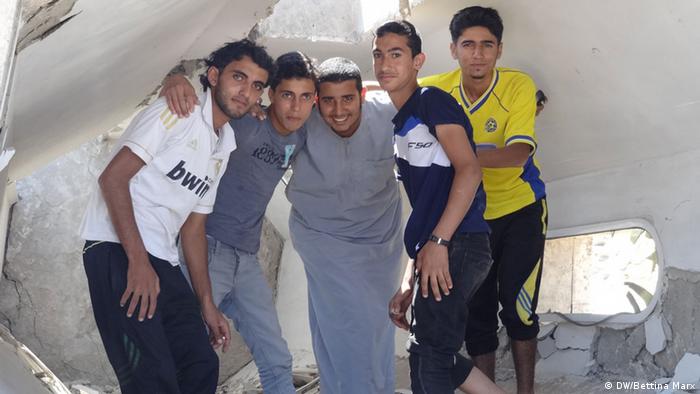 A smile despite the destruction and desolation

Sitting in his small garden in Gaza City as Israeli observation drones buzz overhead on a hot summer night, the human rights lawyer says he is convinced that Israel committed war crimes in Gaza: "This war is unique, unprecedented – it's ugly," Sourani says.

In his lifetime, the 60-year-old adds, he never experienced anything close. In 2008-2009, during the three-week Operation Cast Lead, Israel committed war crimes, but not on this scale, Sourani says. This time, Israel targeted private homes, schools and clinics, he says. Sourani points out that there are half a million refugees, some of whom were forced to leave relatives behind, buried under the rubble.

Whether they are intentional or not, the Israeli attacks terrify Gaza residents. People flee in panic. More than 280,000 people found shelter in schools run by the UN relief agency UNRWA, while others stay with relatives and friends, or simply live in the streets.

But safety was not guaranteed. Several families were killed in airstrikes in their shelters. After fleeing twice, first from Beit Lahia in the north to Shajaiya in the east, then on to Gaza City, the family of German-Palestinian Ibrahim Kilani died in the ruins of a bombed-out, collapsed building in the city, just hours after taking refuge there.

Space is tight in hospitals, too. Doctors at Shifa Hospital have had to operate on patients on the floor. Others lie on mattresses lined up along the hallways. Often enough, several patients were forced to share a bed. Meanwhile, the hospital in Gaza City has also become a shelter for refugees, Dr. Ghassan Abu Sitta says.

"Imagine your local district general hospital that has around 250 patients, then imagine that you bring around 5,000 to 10,000 people to live inside the walls of the hospital as refugees, in makeshift tents," he says. "Then imagine trying to fit 600 patients into this 250-bed hospital." The doctor says medical equipment is used to the point where, "as you are operating, pieces of rust and metal start falling into the wound."

Ghassan Abu Sitta is British with Palestinian roots. The plastic surgeon currently lives in Lebanon and is in Gaza as part of a medical support team. War injuries are his specialty. Abu Sitta has practiced in many conflict zones, including in Gaza during Operation Cast Lead. Back then, the Israeli army used phosphorus, and Abu Sitta treated severe burns.

This time, injuries are of a different nature.

Some 448 children died during the offensive, many of them babies and toddlers. On photos, they often look unharmed, as if they were sleeping. But they were killed by the sonic waves triggered by the gigantic explosions that affect their bodies much more, Abu Sitta says, himself the father of three boys. He can't, he says, distance himself from the plight of Gaza's children.

Power blackouts are the biggest problem for doctors and patients alike. 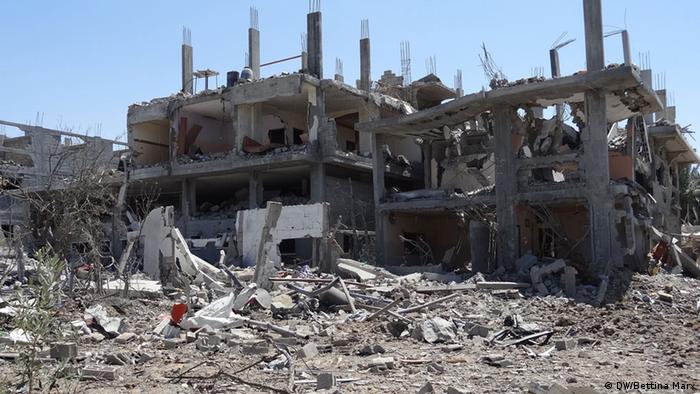 The scale of destruction is immense

The Shifa and other clinics have generators, but they too sometimes give out. They are also costly, and fuel is scarce. The power supply in Gaza was inadequate even before the offensive. Usually, people only had a few hours of electricity every day. Now, the situation is desolate.

There is practically no power, says Adel El Habash, managing director of the Palestinian power company. He says Gaza has three power sources: "The local power generating company in Gaza, the Israeli feeders across the border and some feeders from Egypt." But Israel attacked the local power plant, destroying the boiler and the turbines. All the tanks were bombed and went up in flames, he says. "It was a river of fire."

The damage has to be evaluated, and Adel El Habash estimates it will take a few months to restore the plant. Israel only supplies small amounts of power: "For the time being, we have three hours every 48 hours," El Habash says.

The power outages have a dramatic impact on the water system and sewage disposal. Rebhy El Sheikh, deputy chairman of the Palestinian Water Authority, is responsible for Gaza. With tears in his eyes, he reports of the difficulties he and his workers have encountered since the start of the Israeli offensive.

"Seven operators who provided services in the municipal departments have been killed in direct attacks, while they were providing the service to the people," he says.

The drinking water supply in Gaza is unreliable even on ordinary days. The Gaza aquifer is the region's only natural resource. Over pumped for decades, the aquifer is contaminated and polluted with salt.

By 2020 at the latest, according to a UN report, Gaza will no longer be habitable. That is already true for many people who managed to survive the past few weeks.

The Gaza Strip already has a disproportionately high number of disabled people. Now, the war has left hundreds more maimed and in need of support, says Guillaume Zerr of Handicap International. (14.08.2014)

Israel and the Islamist militant group Hamas have agreed a new five-day truce in the Gaza Strip. Despite a shaky start, a few hours after it came into force, the latest ceasefire appeared to be holding. (14.08.2014)

A Palestinian teenager has been propelled to newfound fame by live-tweeting events in the Gaza Strip. Farah Baker says she wants to tell the world the truth about the ongoing fighting between Israel and Hamas. (13.08.2014)