Black on white: The amazing life of the simple barcode | Business | Economy and finance news from a German perspective | DW | 14.02.2020

The printed barcode with its vertical black lines has made modern life possible. Created over four decades ago, its designer had no idea what an impact it would have years later. Shockingly he didn't make a dime from it. 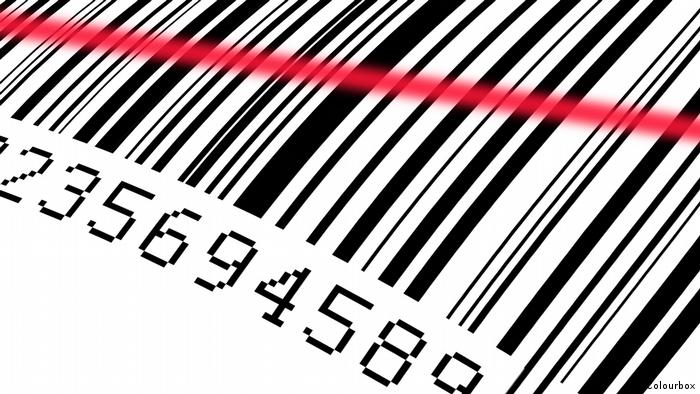 Their black vertical lines on a white backdrop are everywhere. Zebralike, they greet shoppers at the toy store, are stuck to bananas at the grocers and Amazon could never deliver so many things without them. Barcodes make life easier and no one really notices them until the cashier can't scan one and has to — reluctantly — manually type in the product number.

"For all the talk of technological breakthroughs today, arguably the quiet triumph of 20th century technology for the retail sector has been the barcode. Retailing might be simple, but it isn't easy," Jonathan Reynolds, academic director of the Oxford Institute of Retail Management at Oxford University, told DW. The barcode is a "compact, elegant and flexible solution," he added.

The barcode is so universal it's hard to believe someone actually had to invent it. But someone did. At the request of the grocery industry, and tweaking the earlier work of others, American engineer George Laurer headed a team that created the "universal product code," or UPC, and the necessary scanning equipment. It was first used to buy a package of gum at a supermarket in Ohio in 1974. 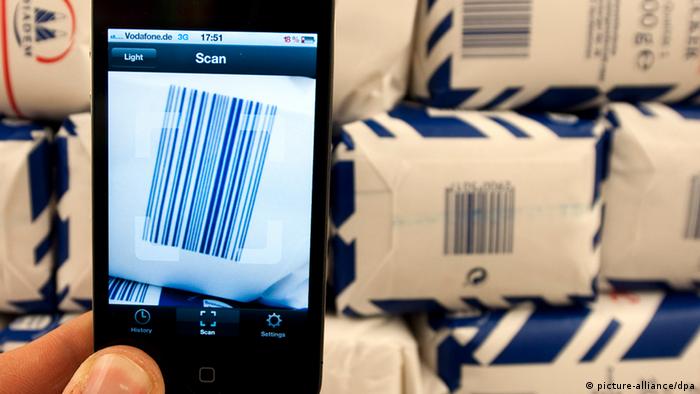 Barcodes have evolved over the years. Some are long, some are short. Most have numbers attached to them, others don't — like these packages of sugar in a Berlin supermarket

The grocery industry, which sells baskets full of cheaper goods, had a real incentive to make the checkout process easier, faster and more accurate. According to sources at the time, barcodes made checkout lines 40% quicker while also eliminating the need to put individual price tags on each item — or change them when prices went up or down. They also stopped customers from swapping price stickers on products. With more advanced software, it was soon possible to see what was selling well and have up-to-the-minute inventories.

A hard sell at first

Despite all the promised advantages, the uptake of barcodes was slow. Retailers were reluctant to invest in the necessary scanners. They didn't want to sink cash into technology that would possibly not last long.

Additionally, many shoppers were leery that their purchases could be tracked, or worse they would be cheated because the price was no longer printed on each item. Conspiracy theories followed. With today's constant surveillance this seems like a quaint idea, but at the time barcodes were a tough sale. 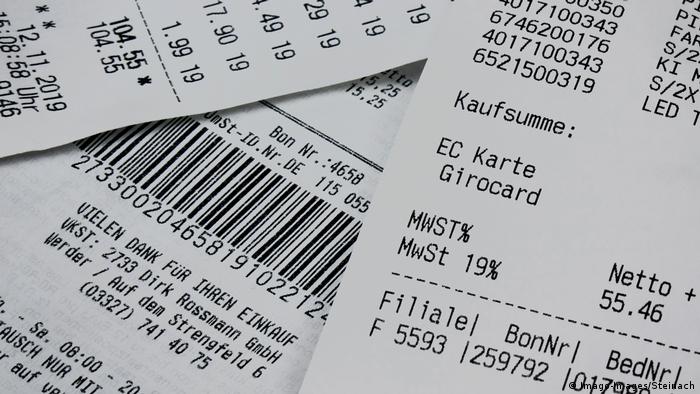 Grocery shops still use barcodes to manage inventory and speed up the checkout as they were originally intended. But they also use them for customer loyalty cards and on receipts. Nonetheless, barcodes have branched out and can today be found across the world

Yet slowly they started to take over the globe in the 1980s. And despite the fact that they now cover things from northern China to southern Chile and are scanned billions of times each day, Laurer never saw a cent. The company left the barcode in the public domain in order to sell its scanning equipment.

"IBM made no attempt to patent or otherwise protect the symbol and code because we wanted nothing to deter the use, or slow the implementation, of the UPC symbol. We gave it to the industry," wrote Laurer in his autobiography "Engineering WAS Fun!"

For IBM it was a coup. For Laurer it was his most enduring invention in a 36-year career at the company. The inventor died in early December at the age of 94.

The birth of the barcode was not easy. "IBM did not have an optical barcode or equipment to read optical barcodes on the market at that time. We had no proprietary equipment to sell or protect or make fit the requirements. These facts gave me a chance to start from scratch," wrote Laurer. Up to that point the two proposals that could be scanned in any direction were "circular codes which were impractical to print to the required tolerances." Laurer had to come up with something different.

In its simplest form his barcode is a one-dimensional set of 30 black vertical lines and 29 white spaces of varying thickness — in all 59 black and white bars. The lines represent numbers, which were printed underneath. Each pattern contains 95 bit of binary code and are matched to information in a database. 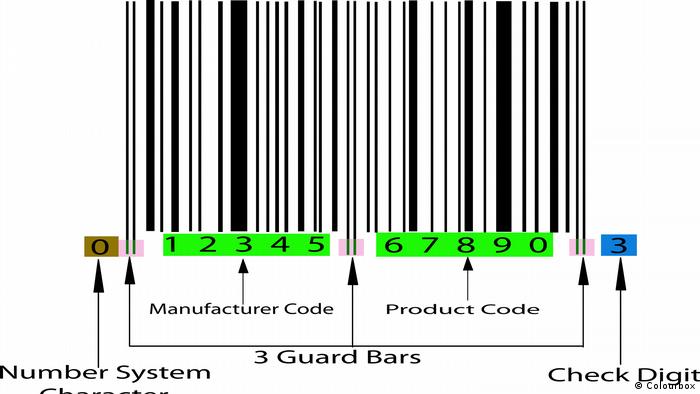 The simplest barcodes are divided into sections for a manufacturer's code and one for the individual product code. The numbers correspond to the black lines, which vary by thickness and spacing

"The barcode is the world's most familiar business standard. We use it regularly as consumers scanning items at supermarket checkouts. But the barcode is far more than this," Alistair Milne, professor of financial economics at Loughborough University, told DW.

From simple to matrix

Though the first generation one-dimensional barcode has changed over the years, the basics have remained the same — to trace inventory, live or inanimate — from wristbands for newborns and blood samples in hospitals to the package you were not home to sign for.

"Since its first commercial point of sale application, the barcode and related standards have become indispensible tools for the management of global supply chains, providing previously unimagined transparency about the location and progress of goods and materials," said Milne.

More recent developments, like the more complex two-dimensional matrix codes, have broader uses. They also look different and integrate rectangles, dots, colors and geometric patterns and are backed up with much more information. 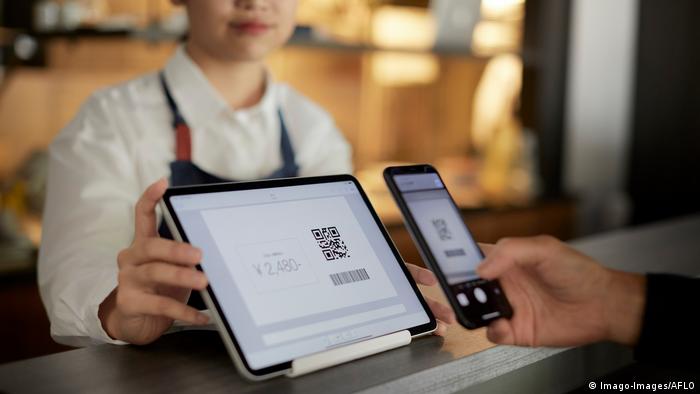 Advanced barcodes, like this 2D "Aztec" code can be read by smartphones and even used for cashless payments

The newest barcode incarnations are used for boarding passes, online banking and are a way for businesses to share information directly with customers through their mobile phones. They also allow people to rent bikes or unlock the doors of a rental car with a quick scan.

Scanning into the future

The barcode's global success shows the great responsibility that can come with an omnipresent technology. "A key to raising and maintaining living standards is taking full advantage of digital technology and standardization," Milne told DW. "Businesses though often resist standardization ... The UPC barcode and its successors illustrate how large an impact is possible."

At the same time policymakers need to understand the importance of universal standards and societies must promote real innovation.

"It is surely no accident that in Germany, where engineering excellence continues to earn great esteem and respect within the business world, that per capita income is 20% higher than in the UK, where engineering is too often regarded as a secondary and routine supporting aspect of business," said Milne.

For IBM and George Laurer one of the most important lessons was a different one. Customers would forgive a human clerk for typing in the wrong sum. Technological solutions on the other hand are held to a higher standard. "People just do not forgive machines for making errors," concluded Laurer in his autobiography.

Modern life would, of course, be possible without barcodes; it just wouldn't be as modern, organized or as fast. There would be no on-time package delivery and customers would spend a lot more time in the checkout line.

German low-cost supermarket Lidl has profited from the difficulties of some of Spain's biggest retailers. It is now the largest German supermarket in Spain and the second-fastest-growing firm in the sector. (13.08.2019)

Online shopping is an increasingly popular option in rural Africa for those who wish to avoid a very long trip to the nearest store. The e-commerce sector has great potential in Africa but has many hurdles to overcome. (14.12.2019)

Data: goldrush of the digital age