For the first time in a decade, the world's wealthiest saw their riches drop in value last year as stock markets spluttered. American billionaires bucked the trend but only just. 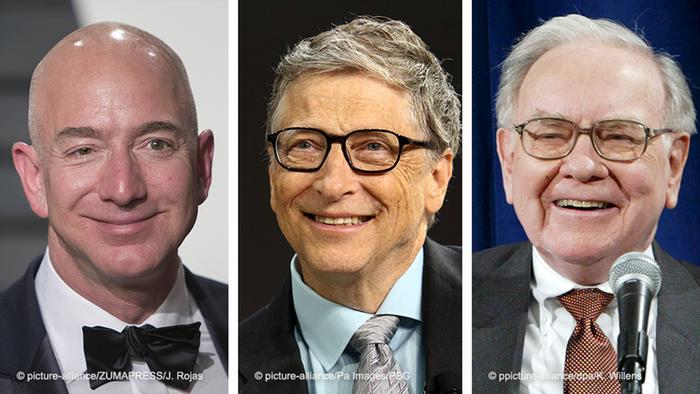 The world's billionaires became poorer to the tune of $388 billion (€354 billion) in 2018 as wobbling stock markets and a downturn in the Chinese economy hurt their wealth.

The Billionaire Effect report, published on Friday, describes how following a decade of getting richer, those with more than a billion dollars in cash and assets were worth 4.3% less than the year before.

Over the previous five years, billionaires saw their wealth grow 34.5%, much of it due to the strong performance of global stock markets, the annual UBS and PwC Billionaires Insights report revealed.

Researchers attributed much of the fall in wealth last year to the strong US dollar, trade frictions and financial market volatility.

"The billionaire boom of the past five years has now undergone a natural correction," said Josef Stadler, head of Ultra High Net Worth at UBS Global Wealth Management.

"Nevertheless, it's clear that billionaire businesses continue to thrive. Billionaires are creating and steering businesses that consistently outperform equity markets."

China, which has grown to have the world's second-largest group of billionaires behind the United States, saw its economy slow down last year.

Across the Asia-Pacific region, the number of billionaires dropped 7.4% to 753. In Europe, the Middle East and Africa, wealth dipped nearly 6.8% to $2.4 trillion.

The Americas was the only region to buck the trend, where billionaires saw a 0.1% rise in the value of their fortunes, mostly due to the success of US tech entrepreneurs.

Germany, which after the US and China has the most billionaires, saw their number cut by nine to 114. Their total assets shrank more than their international peers to about $501 billion.

The report blamed a "lack of innovation and risk-taking" as the reason only four German entrepreneurs have risen to the billionaires' club.

UBS and PwC's data, meanwhile, showed that women are joining the ranks of billionaires in greater numbers. The number of female billionaires has grown by 46% in five years.

Wealth inequality to dominate US election

The fall in wealth among the world's top 0.1% could be welcome news ahead of next year's US presidential election, where calls for more significant wealth redistribution are already dominating the campaign.

The decade since the 2008/9 financial crisis has seen the emergence of the Occupy protest movement, in opposition to growing global inequality. The election of US President Donald Trump, Brexit and the rise of far-right movements have also been partially attributed to the increasing wealth gap.

Economic inequality is often blamed on globalization, deindustrialization in the West and the power of the already wealthy to boost their fortunes.

Financial markets dropped sharply towards the end of 2018 but have since recovered, meaning the billionaires' hardship may be shortlived.

Billionaire entrepreneur Elon Musk on Friday announced that he was backing out of the $44 billion deal. Twitter said Musk had "mounted a public spectacle" and "trashed the company" in its filing.

Their Russian oligarch owners have put superyachts in the spotlight since the invasion of Ukraine. But what makes these billionaires' toys the ultimate climate killers?

It's an election year and the fight against inequality is becoming a hot topic. The number of millionaires and billionaires in Germany is growing. How much does Germany favor the very rich to get even richer?