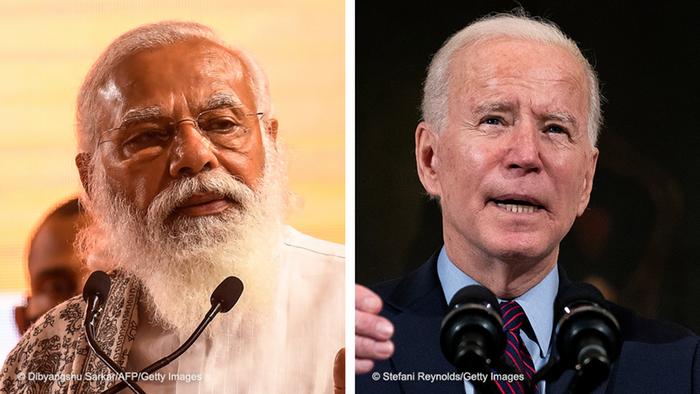 The two also said they would "stand together against the scourge of global terrorism."

US President Joe Biden and Indian Prime Minister Narendra Modi agreed in a call on Monday to work closely to fight COVID-19, renew their partnership on climate change. Additionally, they said that democracy should be upheld in Myanmar.

"The leaders agreed to continuing close cooperation to promote a free and open Indo-Pacific, including support for freedom of navigation, territorial integrity, and a stronger regional architecture through the Quad," the White House said in a statement.

"The Quad" is short for the Quadrilateral Security Dialogue — a strategic forum between the US, India, Australia and Japan, maintained by summits and miitary drills between the member countries.

The two also said they would "stand together against the scourge of global terrorism."

While India and the US have mostly maintained friendly relations over the past decades, the two countries have deepened their ties in recent years over mutual concern of China's growing presence in South Asia and desire for a strategic partnership.

With an American of Indian descent in Vice President Kamala Harris and more than 20 Indian Americans in key roles in the Biden administration, India is banking on maintaining a significant economic, security and defense bilateral partnership.

A state visit to India by former US president Donald Trump in February 2020 was representative of the enhanced ties between the countries, and the increased level of security cooperation. India and the US are also strong trade partners, with over $146 billion (€121 billion) of goods and services exchanged between the two countries in 2019 alone, according to the US Trade Representative.

Despite an unpredictable foreign policy, the Trump administration had consistently supported India's emergence as a leading global power and a partner in maritime security and intelligence to counter
China's influence in the Indo-Pacific region.

India is the world’s second biggest producer of plastic waste after the United States. Prime Minister Modi pledged to phase out single use plastic. The first phase of this plan has just gone into action.

During a "warm" and "candid" virtual summit, the US asked India to not feed Russia's energy economy. Meanwhile, India's foreign minister said the US' primary concern should be weening Europe off Russian energy.