Trump touches down in India for whirlwind visit

After a 17-hour journey, the US president touched down in Ahmedabad, marking the start of his first visit to India. The trip is slated to be big on pageantry but short on policy.

US President Donald Trump arrived in the western city of Ahmedabad in Gujarat — the home state of Indian Prime Minister Narendra Modi — on Monday, kicking off a whirlwind 36-hour visit to India that will feature a mega-rally attended by a crowd of "millions."

The visit is intended to jump-start ties between the world’s two biggest democracies, which have recently been strained under trade tensions.

India's Modi welcomed Trump and first lady Melania as Air Force One touched down at the airport, where leaders shook hands and hugged each other as local troupes played music, performed dances and blew conch shells to offer a traditional welcome. 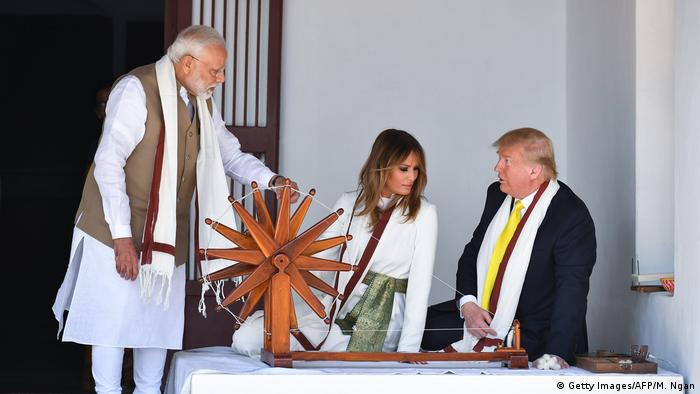 Donald Trump and Melania Trump sit next to a spinning wheel during their visit to Sabarmati Ashram.

At a mega-rally at a newly-built cricket stadium — billed as the largest in the world — Trump later addressed the crowd of more than 100,000.

"America loves India, America respects India and America will always be faithful and loyal friends to the Indian people,'' Trump said in his opening speech.

He said the US looked forward to providing the "best and most feared military equipment" to India, as he addressed a crowd of more than 100,000 at a newly-built cricket stadium. The US president went on to say that both nations were at the early stages of reaching an "incredible" trade agreement.

Trump also praised India as a place where different faiths "worship side by side in harmony'' and made no mention of the new law that is raising fears that India is moving toward a religious citizenship test.

On the route to the stadium, a 22-kilometer (14-mile) stretch was lined with huge billboards featuring Modi, Trump and first lady Melania. Thousands of people, mostly vetted supporters and workers of Modi's Hindu nationalist Bhartiya Janata Party (BJP), stood along the newly-paved road, cheering as Trump's motorcade passed by.

DW's Sonia Phalnikar said the visit is mutually beneficial for the two leaders. "For President Trump this visit is important in an election year, because the diaspora from the western state of Gujarat tends to be a wealthy influential community in the US, which has traditionally supported Trump — many of them made large donations to presidential election campaign — so this is also about galvanizing support amongst them," Phalnikar said.

This visit is also important in terms of optics for Prime Minister Modi, Phalnikar continued, "who has been facing large scale protests at home but also international criticism abroad for a controversial citizenship law which some say undermine India’s secular traditions." 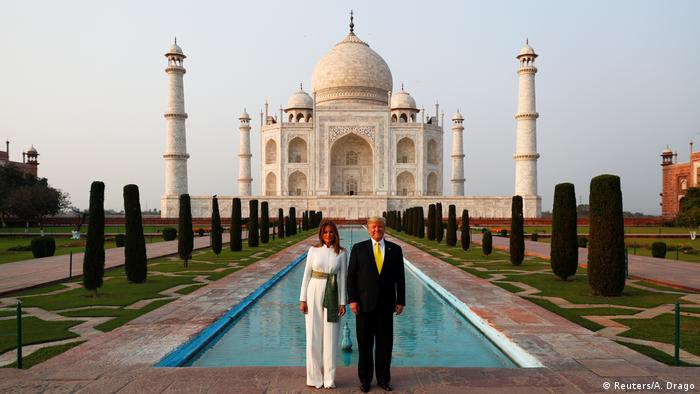 The Trumps paid a visit to the Taj Mahal in Agra. Ahead of their visit, the famous tombs were cleaned for the first time in 300 years.

China's Xi Jinping and Japan's Shinzo Abe have also taken similar trips to the city, the largest in the state, but unnamed officials told Reuters news agency that the scale of preparations for Trump's visit were "unprecedented."

Trump's three-hour visit to Ahmedabad may cost civic authorities $13 million (€12 million), according to some estimates. This includes a wall built to hide one of the slums adjacent to the road expected to be used by Trump.

"Our people have lived here for three generations, but no one has created any facilities for us here," Keshi Saraniya, one of the slum's residents, told DW. "Important people pass by this road, but we're being hidden. Since they're spending so much money on the wall, why not use that to improve our community and provide better facilities for us?"

Critics have also said they expect the trip — Trump's first to India as president — to be rich in pomp and symbolism but lacking in substance. 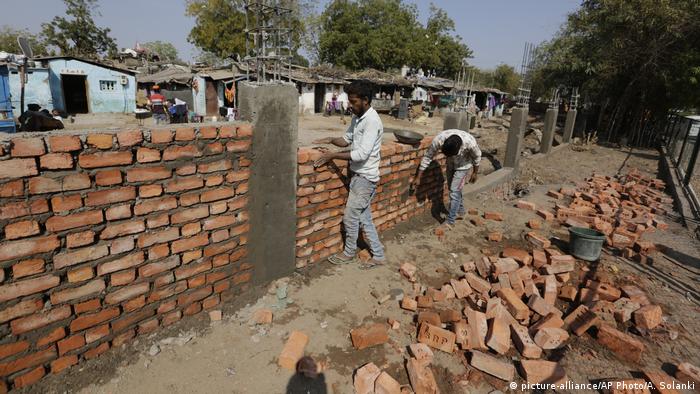 Indian security agencies have been working with the US Secret Service to provide what has been called a "multi-layer security cover."

ITC Maurya, the five-star hotel where Trump and his entourage will be staying, has been turned into a fortress. Located in the city's highly secure Diplomatic Enclave, the hotel will not be accessible to the general public and all the 400+ rooms have been booked.

Anti-sabotage teams from both the army and paramilitary forces will be patrolling the roads near the hotel, and security agencies have also deployed anti-drone detachments, snipers, and sharp shooters on the buildings in and around the area.

The Grand Presidential suite, where Trump will be staying, will not be accessible to most of the hotel staff. This area will be covered by the inner cordon, manned by the Secret Service and a special wing of the Delhi Police. A second layer of security will be deployed around the hotel's lobby, parking and pool area, while the third layer will be deployed in the area outside the hotel compound.

The US president is set to meet with Indian Prime Minister Narendra Modi later this month. He is expected to make stops in New Delhi and Modi's home state, Gujarat. (10.02.2020)