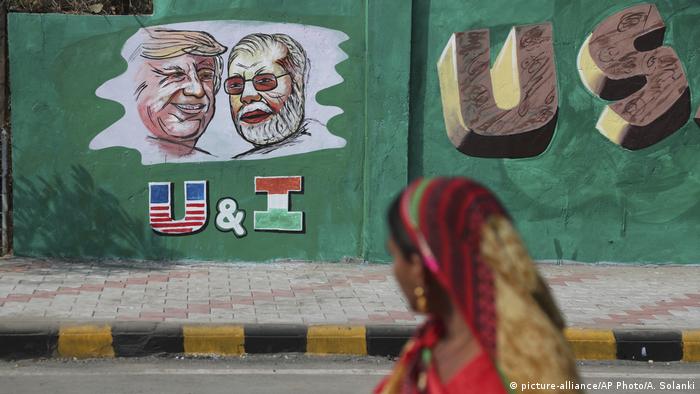 From the moment Air Force One carrying US President Donald J. Trump touches down in India on February 24 for a two-day visit, he will be treated to top-notch Indian hospitality and ceremonial pomp, in line with the extravagance showered by Prime Minister Narendra Modi on foreign leaders.

This is Trump's first official visit to India, and the US president's itinerary is packed with engagements. The trip will likely be one of the biggest media events of this year in India, with non-stop coverage expected in both print and broadcast media.

New Delhi expects Trump's visit to facilitate greater synergies between India and the US when dealing with security issues, terrorism and trade, Smruti Pattanaik, a foreign policy research fellow at the Institute for Defense Studies and Analyses (IDSA) in New Delhi, told DW.

The president and the first lady, Melania Trump, will kick-start the trip by visiting the western city of Ahmedabad in PM Modi's home state of Gujarat. Since Modi became prime minister, many foreign leaders — including those of China, Japan and Israel — have visited Ahmedabad during their India trips.

On Monday afternoon, President Trump will appear with PM Modi at a public event — dubbed "Namaste Trump" — at the newly built Sardar Vallabhbhai Patel stadium, said to be the world's biggest cricket stadium with a capacity of over 100,000.

The event follows the "Howdy Modi" extravaganza in September, when PM Modi walked hand-in-hand with Trump to address a jam-packed Houston football stadium brimming with an Indian-American crowd.

The Trumps will later fly down to Agra for an evening visit to the Taj Mahal, the world-renowned marble mausoleum. 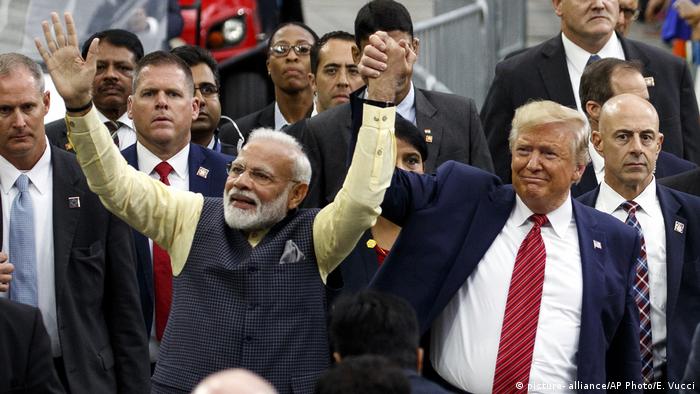 In September, Modi and Trump addressed a large crowd in Houston

The US president will later hold talks with Modi and other senior government ministers in a bid to find ways to deepen bilateral ties.

"There is little or no question that apart from the symbolism it [the trip] would underscore the significance that the US attaches to India," Sumit Ganguly, an India expert and professor of Political Science at the Indiana University Bloomington, told DW.

"The visit will also underscore the diminishing significance of Pakistan, as there will be no obligatory passing stopover in Pakistan. It probably also sends a message to China about the importance that the US attaches to India," he added.

Driven by a growing convergence in their strategic interests, relations between India and the US have been growing steadily over the past few years.

"Given Trump's domestic distractions, his inability to focus on world affairs and his colossal ignorance of international politics, the relationship is nevertheless on a reasonably secure footing. It mostly stems of geopolitical concerns," Ganguly underlined.

Washington views New Delhi as a key player in the US' strategy in the so-called "Indo Pacific" — a mega region that the US military conceives of as spanning the Pacific and Indian Oceans, from the west coast of the United States to the western shores of India.

In recent years, India has increased purchases of military equipment from the US and forged closer defense cooperation with Washington.

Experts describe the current state of US-India relations as being strong on the defense side and struggling on the commercial side. "I would describe US-India relations as a strong strategic partnership with trade tensions," Alyssa Ayres, former US deputy assistant secretary of state for South Asia and senior fellow at the Washington-based Council on Foreign Relations, told DW.

"This is in fact the trajectory the relationship has been on since the George W. Bush administration — it has proven easier to solve some of the barriers to strategic and defense cooperation than to resolve the tough barriers on the trade and economic side."

Trade between the United States and India has grown steadily over the past two decades, with bilateral commerce in both goods and services soaring from $16 billion (€14.82 billion) in 1999 to $142 billion in 2018. Despite this stellar growth, a raft of irritants has marred the bilateral commercial relationship.

The US has long bemoaned what it regards as unfair protectionist measures by the Indian government, including high tariffs and foreign investment barriers. Trump has been a vocal critic of Indian trade practices, describing the country as a "tariff king." Both sides also have sharp disagreements over visas, market access for each other's goods and services, intellectual property rights, and digital economy regulations, among other things.

"I do not see the trade or immigration irritants as something new — these disagreements have been there in some form for at least a decade," said Ayres.

These trade irritants are "more nuisances than threats when it comes to the relationship," Michael Kugelman, a South Asia expert at the Washington-based Woodrow Wilson International Center for Scholars, told DW.

"There's a large enough repository of goodwill to insulate the relationship from the problems on the trade side, and Trump's visit will add even more goodwill and good vibes to that large repository."

Trump recently said the United States and India were working on a major trade deal, but he was not sure if it would be completed before the US presidential election in November.

During the India trip, however, it's likely that pageantry, pomp and symbolism will trump over substance, say observers. "I don't expect any substantive deliverables, especially with a trade deal increasingly unlikely, but there may be a few new defense deals," said Kugelman.

"The main takeaway will be that President Trump is in India, dialoging with Modi and then sharing the stage with him at a pageantry-soaked event. That's what will resonate the most, and that's exactly how these two leaders — both of whom relish big spectacles — and their governments would like it to be."