Better child care may be key to boosting Germany′s birth rate | Germany | News and in-depth reporting from Berlin and beyond | DW | 14.02.2011

A recent survey shows that most people who want a child are choosing not to because of work commitments. Women say there needs to be better childcare before they have kids. 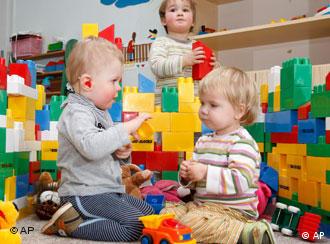 Getting child care for younger children can be difficult in Germany

A recent survey suggests a lack of financial stability and family- friendly measures in the work place are getting in the way of having children in Germany, which has one of the lowest birth rates in Europe. Each woman in Germany has on average 1.36 children.

"Politics and business need to create conditions that one can rely on for longer than one legislature. Society has to show young parents that their children are wanted and that they enrich our aging country" said Marie-Luise Lewicki, Editor in Chief of the family magazine ELTERN, which published the survey.

Two thirds of the 1,000 Germans without children between the ages of 25 and 45 surveyed by ELTERN said that they would "definitely" or "perhaps" like to have children at some point, but also said they put financial stability, their career or training ahead on their list of priorities.

77 percent of those asked said that they didn't think they could combine their job with family life. 61 percent said that there wasn't enough reliable child care available. 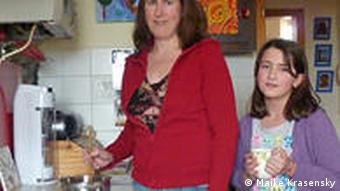 "The toughest part of bringing up a child is finding adequate child care," Maike Krasensky, a 38-year-old single mother agrees.

Krasensky raises her 12-year-old daughter alone. She would have liked to have had more children, but was never in the right situation. She's found it difficult to get an apartment and her social network is limited. So finding adequate childcare was essential.

"It starts with finding a nursery, which has to be open until whatever time, so that you can work full time, because I always had to work full time. Money was usually too tight otherwise," she said.

"Then, if you have a long team day or have to work on a Saturday, you always had the question: where is the child going to stay?"

Krasensky would like the government to create more kindergarten places and also give single parents tax breaks, so that it's easier for mums to combine a career with their family. 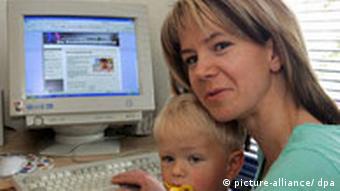 Some companies, like Deutsche Post/DHL are trying to introduce what they call a "Work Life Balance" concept.

"We are about to introduce concepts which include child care, work schedules, wages and payment... but the most important aspect is to provide the infrastructure so that an employee can choose, which way would I like to go," said Susanna Nezmeskal-Berggötz, the head of the department for corporate culture at Deutsche Post/DHL.

Nezmeskal-Berggötz, a mother of two, took six months of maternity leave and now works from home. Deutsche Post/ DHL are offering their employees services like an emergency nanny if an employee's child is sick and they have an important business meeting.

"I've used this service a lot, because you can never know when your child will be sick," Nezmeskal-Berggötz said.

Germany has one of the lowest birth rates in all of Europe. But preliminary government data shows that 2010 may be bucking the trend, producing the biggest increase in births in a decade. (29.12.2010)

The Green party has received a mixed response from all sides for its aim of setting a legal quota for top management posts. There's hardly any consensus on the issue - whether in the world of politics or of business. (03.12.2010)