Thanks to a provocative intervention by Labor Minister Ursula von der Leyen, gender quotas in the top echelons of big companies are back on the agenda in Germany - much to the consternation of the business community. 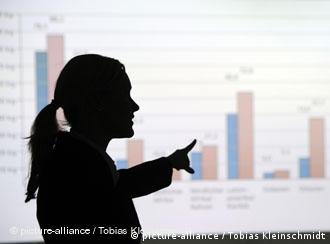 Women are rare in top jobs, despite better academic results

Labor Minister Ursula von der Leyen raised a few eyebrows - not least within her own government - when she told news magazine Der Spiegel that she wanted a flat 30 percent quota of women in executive boards and leading positions.

Although the minister's idea was promptly vetoed by Chancellor Angela Merkel, it has caught on elsewhere.

Numerous economists, trade union leaders, politicians and celebrities around the country - both male and female - say it's high time for a quota at top management level. The fusty old boys' boardroom need to be shaken up, they argue, and the fusty old boys can't be trusted to do it themselves.

Carlotta Koster-Bröns, head of the Association of German Businesswomen (VDU), is grateful to the minister for starting the media debate. "Women have better school grades than men, better university grades," she said. "Then they get to lower and middle-management positions and they disappear. We believe that prejudices can only be brought down with a quota. That will give women the chances they deserve."

The raw stats back her up. More than half of school and university graduations in Germany are completed by women. But barely 22 percent of German management positions are occupied by women.

There has been some vehement resistance from business – particularly from small and mid-sized companies that say they could risk serious upheaval if forced to promote more women. 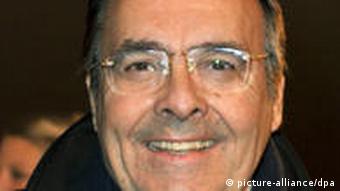 Mario Ohoven, president of the association for medium-sized businesses, also has some constitutional objections. He says a gender quota doesn't just contravene the anti-discrimination law - it endangers the freedom of contract. "The freedom of contract must be respected, and it depends only on qualifications and personal suitability," he told Deutsche Welle. "If there are women who have more qualifications and are better suited, then they can have 60 or 70 percent or more. No question. The best should lead."

A more surprising opponent of the quota is Sonja Fusati. She is the founder and head of Victress, a lobby group that promotes mixed leadership, and has her own media consultancy. She is dedicated to exploding gender stereotypes in business, but believes a quota would be counter-productive.

"You can't impose a quota on a utility provider, for example, where you have basically no market of females who can go into leading positions," she said. "I think you have to step back a bit and think about gender-sensitive education before asking those companies to put 30 percent women in leading positions. Because where do you get them from?"

A big office isn't everything

Fusati is also unconvinced that women actually want management jobs. She says many women value their freedom too much to give it up for some extra money and a bigger office. Women, she says, are often more attracted to the creative industries.

"The world is changing. A lot of future fields of growth and development lie in areas that women are traditionally very good at, or thought to be very good at – like communications, social skills," she said. "So there's a big opportunity there."

But that argument doesn't wash with Anke Hoffmann, board member at the Kienbaum Consultancy. Hoffmann has built a successful career in a male-dominated world - in the face of sexual discrimination and, occasionally, sexual harassment.

"Men in higher positions thought that because of their positions - as people who could potentially promote me - they could try to extend that power," she said. "Often they went over the line. You're in a board meeting and suddenly you feel hands under the table. You can hardly imagine it; you think it only happens in films." 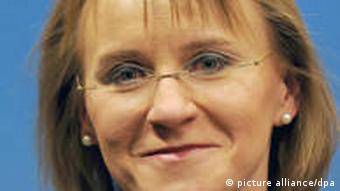 This makes the issue of gender quotas quite practical. "The more women you have in such positions, the less likely it is to happen," said Hoffmann. "I mean, if you're sitting next to a woman, then it can't happen."

Hoffmann suggests that the whole culture of business in Germany is saturated with sexism. "It starts with that and goes into intrigues over top management positions. I haven't just experienced that myself; I've heard it from a lot of women," she said. "Where male networks really play a role, information is leaked or suppressed so that you end up running into a wall."

Ten years ago, German companies made an agreement with the government to voluntarily bring gender equality to their boardrooms. Since then, while things have improved slightly at mid-management levels, very little has changed higher up. It's this decade of inaction that has changed the minds of Ursula von der Leyen and many other politically conservative women. Only a law, they believe, will force change.

Sigrid Nikutta was recently-appointed CEO of the BVG, Berlin's local transport network – one of the top jobs in the capital. She beat out 176 other candidates, 21 of whom were women. She also experienced some sexual discrimination at work, though it was mainly sub-conscious.

"Of course, if you are young and you have no children, then everyone says, 'okay, everything is equal.' But when I got my first child, there was a big break," she told Deutsche Welle, "Because then the (assumption) was, 'Okay, now she will be much more quiet. Now everything is fine; she will relax and focus on the family.' "

As for imposing laws on companies, she favors self-regulation, but thinks that a quota might be a good idea for now.

"I think such a gender quota shouldn't be necessary," she said. "Of course, individual achievement should be the measurement. I don't know which is the best way, but I think there must be a sort of pressure on the companies to have more women in higher positions."

It seems that at least a temporary gender quota might be the best way to give the male-dominated companies a firm push toward equality.

Ackermann under fire for remarks on women executives

Where exactly does Deutsche Bank stand on affirmative action for women? The bank says it's committed to promoting women in management, but critics say an offhand comment from CEO Josef Ackermann suggests otherwise. (08.02.2011)

Chancellor Angela Merkel seemed to put an end to the bickering over quotas when she finally weighed in saying that, for now, there would be no government requirements for the makeup of companies' management. (03.02.2011)

Some in the business world see gender quotas as the a last hope. Others say they distract from the real hurdles for women. As the government squabbles over quotas, business leaders debate how best to help working women. (02.02.2011)