Some in the business world see gender quotas as the a last hope. Others say they distract from the real hurdles for women. As the government squabbles over quotas, business leaders debate how best to help working women. 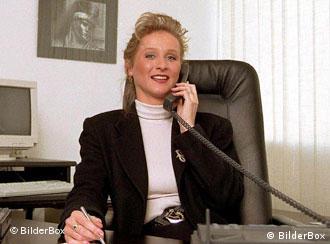 In Germany's 200 biggest companies, women only represented 3.2 percent of executives. Most everyone agrees that's a problem, but politicians and business leaders aren't sure how to change that number.

There's a split in Chancellor Angela Merkel's coalition with some calling for a traditional quota system, some saying companies should set their own goals and others rejecting government interference in hiring decisions altogether. Merkel herself said on Wednesday that companies deserved another chance to get more women into management. And now the debate has moved to the boardroom and the response is mixed.

Margret Mönig-Raane, deputy leader of the Verdi union and member of Arcandor's board of directors, said on Wednesday that the union’s experience with quotas had convinced her that they were necessary to get more women involved at the highest levels. 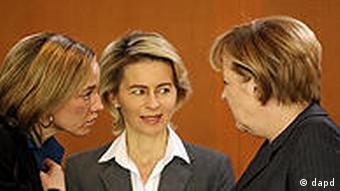 Merkel and her ministers have different ideas on the issue

"It doesn't work without quotas," she said. "Nothing changes. I'm not saying that the world will be saved just with quotas. What I'm saying is that without quotas we aren't going to increase the proportion of women across all management levels."

Andrea Schauer, the head of Playmobil, told German public radio that she usually has a problem with quotas because they interfere with free enterprise. But the success with quotas in the Scandinavian countries has her rethinking her position, she said.

"We've been talking about getting more women into management for almost ten years. Not much has happened. In that same amount of time Scandinavia has gone in a completely different direction," she said. "I ask myself, 'are things going badly in these economies or are they doing well?' I think they're doing well and they've chosen to go with the quotas."

Schauer said that the discrepancy between the high number of female college graduates and the number of women in management could partly be explained by the subjects women tend to study.

"Sometimes it begins during university," she said. "Many women study fields that later aren't in much demand by the business world."

The head of the German Association of Chambers of Commerce and Industry, Martin Wansleben, told Deutsche Welle that he too thinks there are other factors involved. Wansleben said the current quota debate could be distracting politicians from the real hurdles keeping parents from working.

Germany needs more childcare options, nursery schools that are open longer and schools that don't send the children home at noon, he said.

"What they also need is more flexible work times, the possibility to work, for example, 80 percent. Then they would have two days combined off for their family and still have a bright and promising work future ahead."

Wansleben thinks more can be done to support young families, and thus encourage women in their careers

For Wansleben, the discussion of getting women and especially mothers working is not just about feel-good idealism. It's about the numbers. Germany's birthrate has dropped dramatically in recent decades and there's concern there might not be enough people to keep the economy going.

"We need everybody in Germany able and ready to work in the right position," he said.

"We're going to have a shortage of qualified workers," she said. "We can't afford to simply ignore 50 percent of the qualified potential employees."

The EU’s Commissioner for Equal Opportunities Viviane Reding has warned firms in Europe to rapidly promote women into top jobs or face a 30 percent quota from next year. (17.09.2010)

The number of women managing German companies is lower than in other industrialized nations, according to a new study. It shows that just two percent of top executives are female. (27.11.2010)