Bertolt Brecht's 'Mack the Knife' set for the silver screen

To this day, The Threepenny Opera remains Bertolt Brecht's most successful play. The latest film version, Mackie Messer: Brecht's Dreigroschenfilm, is out in German cinemas — with a stellar cast. 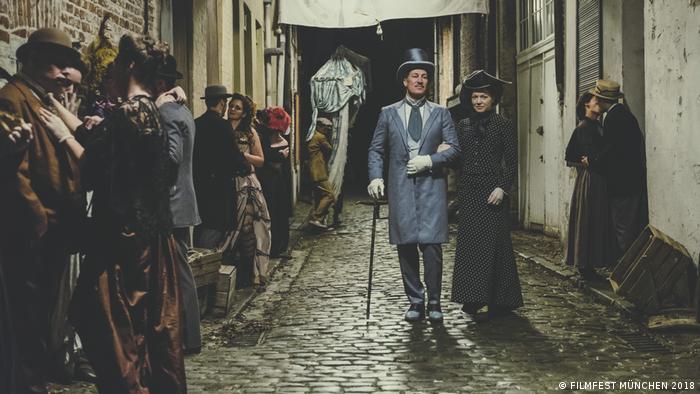 Joachim Lang's new film follows Brecht's struggles as he attempted to adapt his famous opera satire for the cinema in the early 1930s. At that time, Brecht wrote a proposal for a film version, but due to disagreements between Brecht and producers the film was never realized.

Lang's 2018 version is, to a certain extent, a making-of that traces this first attempt at filming the opera. After the triumphant premiere of The Threepenny Opera in 1928, it didn't take long for Brecht and composer Kurt Weill to consider a film version. The story of Macheath, a notorious criminal who runs away with Polly, the daughter of London's so-called beggar king Peachum, was set for silver screen success. But then Brecht and Weill were forced out of the project.

Their dispute with the producers ended up in court, and was eventually resolved with a settlement. The finished film, directed by Georg Wilhelm Pabst, premiered in Berlin on February 19, 1931.

Lang's film version takes a fresh approach, staging its story around Brecht's original film treatment and imagining how it would have turned out. At the time, distributor Nero Film was aiming to produce a blockbuster. But Brecht didn't necessarily want to make a crowd-pleaser; he wanted to make a political statement.

In the new film, actor Lars Eidinger as Brecht says to the producers: "In the realm of art, you and your people have the mind of an oyster." It's just one of many original Brecht quotes incorporated into Lang's film.

And, of course, the film includes the lines from that classic hit: "Oh, the shark has such teeth, dear / And he shows them pearly white / Just a jackknife has Macheath, dear / And he keeps it out of sight …," this time sung by Max Raabe. With a melody by Weill, this song was one of the biggest worldwide hits from The Threepenny Opera. There have been at least 48 versions performed by artists such as Louis Armstrong, Bobby Darin, Ella Fitzgerald, Marianne Faithfull and Robbie Williams.

The world premiere of The Threepenny Opera at Berlin's Theater am Schiffbauerdamm on August 31, 1928 threatened to be a disaster: actors jumped ship, and the music changed up to the very last minute. Brecht provided his actors with whistles to drown out boos from the audience.

But he needn't have bothered. "At first, there was silence. And when the big hit played, the hall raved. The Threepenny Opera with music by Kurt Weill thrilled Berlin," recalled the Berliner Tagesspiegel in its review at the time. If all goes well, Lang's film may soon be garnering similar reviews.

Threepenny Opera at the Copacabana

Berthold Brecht's heirs and notorious theater director Frank Castorf have reached an agreement over a controversial production of Bertolt Brecht's "Baal." The production will only be shown two more times. (19.02.2015)

The controversial film "Matilda" readies to premiere in Russia, despite attempts to ban it due to its 'irreligious' portrayal of the last Tsar. Lead actor Lars Eidinger spoke to DW's Juri Rescheto about the scandal. (14.06.2017)

German theater director Frank Castorf is known for scandalous productions. Now he's being sued by Bertolt Brecht's heirs for not sticking to the original script. Is theater about trying new things or staying authentic? (04.02.2015)