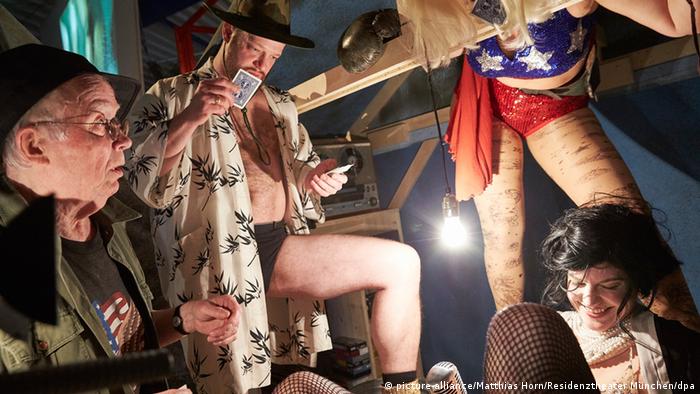 The compromise was reached after six-hour-long deliberations before the state court in Munich yesterday (18.02.2015). The theater hosting the production, Residenztheater in Munich, has agreed to cancel all dates after the end of February.

After that, Castorf's work will also be performed at the Berliner Theatertreffen in May, an annual theater festival in the German capital, which has named Castorf's work one of the 10 most noteworthy productions in current German theater.

With this settlement, the Brecht heirs have now largely reached their goal of banning Castdorf's "Baal" production based on claims of copyright infringement. According to German law, the copyright holder of a play has the right to forbid the misinterpretation of his or her work.

Frank Castorf had caused a stir with his current production of Brecht's famous play about the reckless, drunken and promiscuous poet Baal. Bertolt Brecht's heirs were enraged about changes he'd made to the script and sued Castorf.

Barbara Brecht-Schall, 84, maintains the rights to her father's works until 70 years after his death - that is, 2026. In her name, the plays' publisher, Suhrkamp, requested a preliminary injunction against the theater with the state court in Munich.

Raised from ruins: The revival of Dresden's Semperoper

Forty years after Dresden was destroyed in World War II, a key landmark was restored and reopened: the Semperoper Opera House. The world watched as the East German triumph was unveiled. (13.02.2015)

The four parchment copies of Magna Carta have gone on display together in London, for the first time in their 800-year history. The document is considered a cornerstone of human and civil rights in much of the world. (02.02.2015)