The four parchment copies of Magna Carta have gone on display together in London, for the first time in their 800-year history. The document is considered a cornerstone of human and civil rights in much of the world. 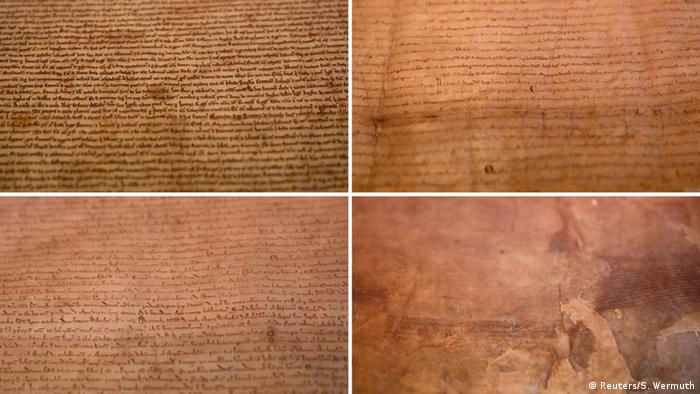 A total of 1,215 people were to be allowed to see the manuscripts at the British library on Tuesday, and on Wednesday - and experts will get a unique chance to study the four documents side by side.

The two resident copies from the London library were joined by two more from Lincoln and Salisbury Cathedrals on Monday, for the first time since the document was created in the year 1215.

The visitors for the Tuesday event have previously been drawn from a ballot with over 40,000 names of people from more than 20 countries.

"Today is a really exciting day: the first time ever we have brought together the four surviving original copies of the Magna Carta," Claire Breay, the library's head of medieval manuscripts, said.

"It established that the king was subject to the law and it's been used in the centuries since it was granted as a defense against arbitrary and unjust rulers," she said.

"And, of course, it has enormous symbolic importance as a symbol of rights and justice and freedom around the world."

The Magna Carta is a result of a dispute between King John of England, brother of Richard the Lionheart, and 40 rebellious barons in the 13th century. The king reluctantly agreed to the demands put forward by the nobility and accepted the document limiting his own power in an effort to avert the threat of civil war.

The original copies were written and signed by the River Thames at Runnymede and sent throughout the medieval kingdom in the summer of 1215.

Although one third of the original text was changed or deleted in the next ten years, and most of the document's 63 clauses repealed, the principles of the eight-centuries old document served as a foundation for the Universal Declaration of Human Rights and the US constitution. The Magna Carta also influenced writers of the French constitution and many other legal systems around the world.

"No free man shall be taken or imprisoned or disseized or outlawed or exiled or in any way ruined, nor will we go and send against him except by the lawful judgment of his peers by the law of the land," the Magna Carta states in Latin.

A string of celebratory events has been organized all over England in order to honour the anniversary, including debates, theater plays, and charity dinners. A mock trial of the barons who forced King John to concede to the charter will also be staged at the Westminster Hall, the seat of the modern-day British parliament. The trial will debate whether they are guilty of treason.

The Magna Carta Trust, which looks after the memorial site in Runnymede where the document was agreed upon, believes the document's significance is increasing:

"800 years on, the Magna Carta's best days lie ahead," it said. "As an idea of freedom, democracy and the rule of law, it is lapping against the shores of despotism."

In its annual report, Human Rights Watch claims the emergence of the "Islamic State" could be linked to the so-called "war on terror." The NGO points to human rights violations committed during the US invasion of Iraq. (29.01.2015)

Queen Elizabeth II has died at her Balmoral residence — as it happened 08.09.2022

News of the 96-year-old monarch's death comes hours after it was announced she was under medical supervision. Her son is now known as King Charles III.

King Charles III has been visiting Northern Ireland on the latest leg of his tour after the death of Queen Elizabeth II. Meanwhile, police are facing criticism over their treatment of anti-monarchy protesters.