In its annual report, Human Rights Watch claims the emergence of the "Islamic State" could be linked to the so-called "war on terror." The NGO points to human rights violations committed during the US invasion of Iraq. 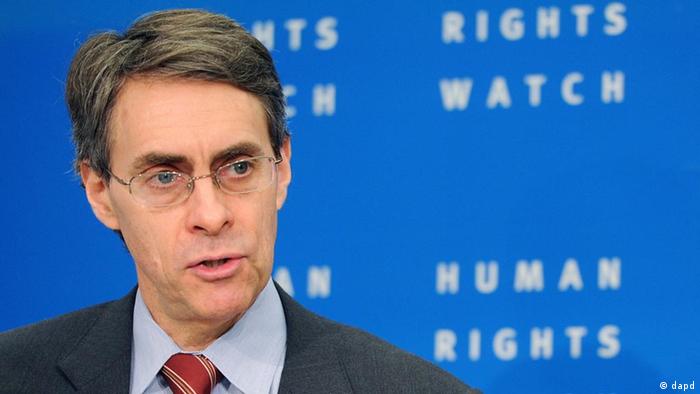 The US and Great Britain "largely shut their eyes" to the persecution of the Sunni minority under former Iraqi Prime Minister Nuri al-Maliki, the New York-based watchdog organization said. The situation was additionally burdened by the abuses in Abu Ghraib and Guantanamo Bay, and the security vacuum following the ousting of Saddam Hussein in 2003.

"There has been a tendency, particularly in the Middle East, to play shortsighted security concerns over principled support for human rights", said HRW executive director Kenneth Roth (pictured above) while presenting the 660-page 2015 HRW report Thursday.

According to Roth, many governments "appear to have concluded that today's serious security threats must take precedence over human rights."

"In this difficult moment, they seem to argue, human rights must be put on the back burner, a luxury for less trying times," Roth said.

The watchdog organization has also criticized the "shamefully inadequate" response to the repression conducted by the government of Abdel Fattah el-Sisi in Egypt, who ousted democratically elected president Mohammed Morsi, who had been close to Islamist movements.

Support for the Sisi leadership sends "an appalling message to the region," Roth said.

"ISIS (sic) can now credibly argue that violence is the only path to power for Islamists because when they sought power through fair elections and won, they were ousted with little international protest," he said.

Human Rights Watch also raised concerns about the extent to which governments gather data on their citizens.

The United States and Britain remain the leaders in the field, having "thrown away any notion of proportionality."

The report also suggested that human rights abuses in Russia may have aggravated the Ukraine crisis, while at the same time it critized the West for falling back on "a good-versus-bad mentality" and its reluctance to criticize Ukrainian abuses.

The Human Rights Watch World Report 2015 was released in Beirut Thursday. It reviews human rights practices in more than 90 countries.

As Hun Sen marks his 30th anniversary in power, a new report by HRW slams the Cambodian leader's human rights record, accusing him of holding on to power through fear and violence. DW speaks to HRW's Phil Robertson. (13.01.2015)