Lawyers have filed a lawsuit against Berlin's social affairs minister over dangerous conditions for refugees waiting at the city's LaGeSo authority. There have been several injuries, exhaustion and cases of hypothermia. 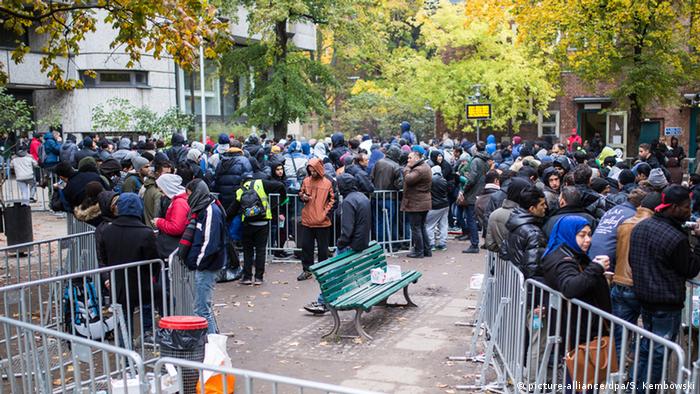 The conditions outside the LaGeSo authority in Berlin have been a national embarrassment for Germany for months. Every day, hundreds of refugees crowd along the metal barriers outside the state's office for health and social affairs, whose courtyard became a giant muddy waiting room sometime in the summer. People's attention is fixed on a black electronic notice board that flashes up yellow numbers - and there's a crush and surge in the crowd every time a new number flashes up.

The scenes at the LaGeSo have produced nothing but bad headlines for the nation's capital. The early news stories, about people waiting days and weeks to get registered, were replaced in October by reports of physical attacks and neo-Nazi slogans chanted by security guards whom the Berlin government hired to keep order. The security firm in question has now been replaced.

There have also been intermittent reports of illnesses and injuries: On November 15, for example, volunteers called an ambulance when a man waiting in line showed signs of hypothermia - an emergency medic later measured his temperature at 32 degrees Celsius (89.6F). 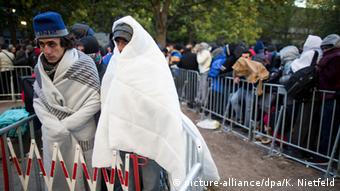 Cases of hypothermia have been reported

Now a group of 40 lawyers have pressed charges for causing physical injury against Berlin Social Affairs Minister Mario Czaja and LaGeSo chief Franz Allert for allowing these conditions to continue. "Conditions like in Berlin are unique nationwide," lawyer Christina Clemma said in a statement published Monday by the Union of Democratic Jurists (VDJ), one of the two organizations that brought the charges. "In no other German state have politicians and the administration failed so systematically as here."

"We have reports of a pregnant woman collapsing, of an injury that came about after a crush, for example," lawyer Ulrich von Klinggräff told DW. "We haven't made a comprehensive list, but we have taken reports from (volunteer organization) Moabit Hilft and taken certain sample cases."

Since the lawsuit was filed, von Klinggräff has received emails from people offering even more information. "A teacher who gives German lessons for refugees told me about a completely exhausted refugee boy who collapsed in her class," he said. "He told her he'd been queuing at the LaGeSo since 4 in the morning, and showed her a fresh injury on his hand that someone from security had given him."

In their suit, the lawyers have listed a string of witnesses including volunteers, journalists, NGO workers and Dr. Günther Jonitz, president of the Berlin Chamber of Physicians, who has publicly condemned the conditions at the LaGeSo.

Von Klinggräff said it was unlikely that state prosecutors would bring charges against Czaja - elected politicians are almost never charged for the failings of the authorities. "Of course I hope very much that the state prosecutors see the necessity of doing so," he said. "But, at the same time, just the press attention that we've had since yesterday is already a success. And I hope that the social pressure on Mr. Czaja will finally bear fruit."

It is true that it is one of Germany's poorest public administrations at the best of times, but that is no excuse as far as von Klinggräff is concerned. "To have no resources in a city like Berlin is ridiculous," he said. "That's something to do with political priority. You do get the impression that the conditions there are so bad because the people are being treated like second-class citizens. It can only be that for the Berlin government, or for Mr. Czaja, control and order are being put before people's right to be physically safe." 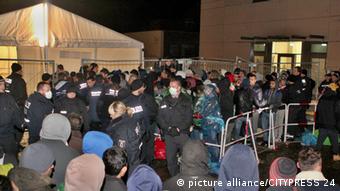 Czaja's response to the lawsuit was bullish. "Everyone is free to press charges, but that won't help improve the situation for refugees," the minister told local media. "The accusation that the administration had consciously provoked injuries and illnesses is absurd. I reject that completely. We're working every day to prevent homelessness."

Chaos inside and out

Berlin has been struggling to accommodate what some estimates put at 800 new arrivals a day. Despite an emergency contingent of shift workers, and even military personnel to take on administrative duties, the chaos outside the LaGeSo seems to be reflected inside.

Local broadcaster RBB recently collected a number of alarming reports from anonymous officials at the office. "The unprocessed cases are piled up in yellow mail boxes," one official said. "And the yellow mail boxes are stored in several rooms. There is no ordering system. That's why we have the job of the 'searcher' - those are colleagues who are only occupied with finding the right files."

"We call in 500 refugees or more every day - with appointments at 9 a.m." another said. "But we've known for weeks that we can only process 200 at the most. I keep asking my superiors why we can't give out realistic appointments. The answer is that it probably has something to do with some directive or other that we have to follow."

A leading German trade organization has presented an action program in Berlin aimed at easing refugees' access to vocational training and the jobs market. But it warned the scheme may take years to yield results. (08.12.2015)

Berlin's tug of war over space to house refugees

Berlin's city hall is in a clinch with local districts over the use of indoor sports facilities to house refugees. As the influx creates more pressure for action, critics argue that these halls are incubating tensions. (03.12.2015)

Eighteen hundred people jostle for space at Berlin's refugee registration center, which has found a makeshift home in the courtyard of a government agency. Fights and quarrels erupt daily. It's a disaster, volunteers say. (07.10.2015)