Berlin stands up against Putin at huge anti-war rally | Germany | News and in-depth reporting from Berlin and beyond | DW | 28.02.2022

Berlin stands up against Putin at huge anti-war rally

At least 100,000 people hit the streets in Berlin on Sunday against Russia's invasion of neighboring Ukraine. Their message was clear ⁠— "Stop the war" and "peace in Ukraine and all of Europe." Vast crowds turned out for the protest on Sunday in Berlin

Aerial shots of a sea of people are normally common at the Berlin Marathon in late September, or at major international soccer events, when the city's Strasse des 17. Juni boulevard turns into a gigantic fan mile, teeming with people as far as the eye can see. This time however, the occasion is different  ⁠— Russia's invasion of Ukraine.

The organizers of the anti-war rally, an alliance of churches, trade unions, environmental groups and peace initiatives, had expected 20,000 protesters. But at least five times as many joined the demonstration with police estimating the number at 100,000. Organizers spoke of half a million. Either way, it was a powerful demonstration for peace, shortly after the start of the war on February 24.

A sea of blue and yellow

Anyone moving around in the German capital on Sunday at noon under a bright blue sky could sense that an entire city was in deep solidarity with the people in Ukraine. The train platforms on the city's outskirts were crowded with people, like on a regular work day during the morning rush hour. 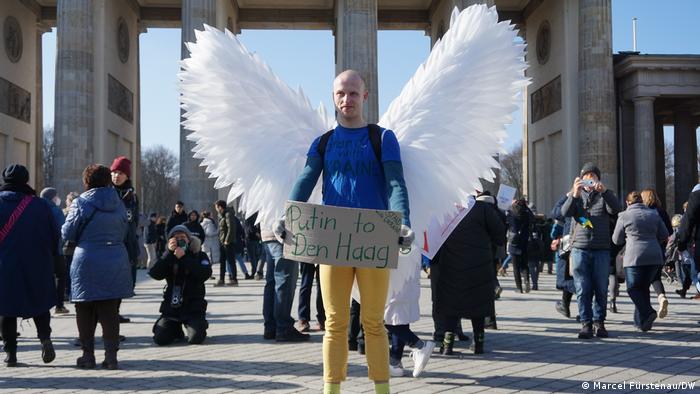 The going was slow at Berlin's landmark Brandenburg Gate half an hour before the official start of the rally. A man with huge white wings like an angel of peace, dressed in the Ukrainian national colors of blue and yellow, faced the crowds, his message plain for all to see on a cardboard sign: "Putin to The Hague." It was a reference to the International Criminal Court in the Netherlands, which is  responsible for genocide, crimes against humanity, crimes of aggression and war crimes.

"Those responsible (for the invasion) should be in The Hague," says Christa Mientus-Schirmer. The 67-year-old Berlin resident did not name names, but it was clear she meant Russia's President Vladimir Putin, whom many protesters on this Sunday, 77 years after the end of the Second World War, likened to Adolf Hitler on placards.

"I am terribly sad that in the 21st century, we have a war in Europe again," says Mientus-Schirmer, who grew up in East Berlin, long separated from the West by a wall. Holding up two open umbrellas in the national colors of Ukraine, she had her back to Strasse des 17. Juni, a famed boulevard named after a failed popular uprising in 1953 against the Communist dictatorship in East Germany. 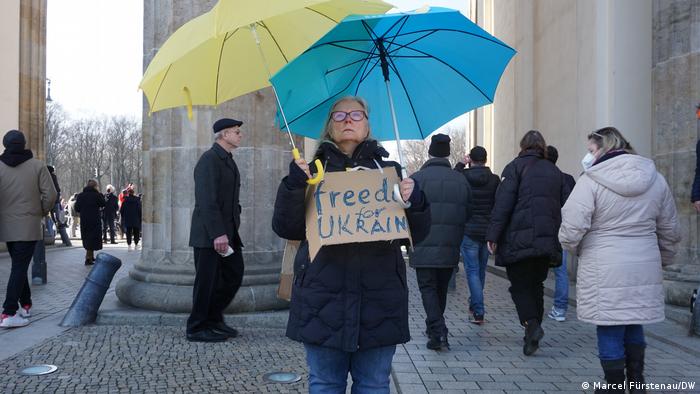 Christa Mientus-Schirmer was among an estimated 100,000 protesters on Sunday in Berlin

Christa Mientus-Schirmer was born a few years later and did not experience the fight for freedom, which was crushed with Soviet help. "But the fear that the Russian tanks spread in East Germany at the time is naturally something that was talked about in the family," she says. As a child on vacation with her parents in the Ore Mountains, Mientus-Schirmer heard tanks rumbling into what was then Czechoslovakia.

The country in the former Eastern Bloc was another place where hopes for democracy were crushed on orders from the Kremlin in what became known as the "Prague Spring." It was a similiar situation in Poland in the early 1980s when the independent Solidarnosc trade union movement, which was pushing for reforms, was suppressed with Soviet support. At the time, Christa Mientus-Schirmer was a young woman.

"It's always been the same pattern," Mientus-Schirmer says, whether it was the Soviet Union back then or Russia now — the Russians always seemed to be called upon to step in. Today, Putin claims to have been asked for military assistance by the breakaway regions of Luhansk and Donetsk in eastern Ukraine, which call themselves "people's republics."

"Ukraine needs our solidarity," says David Zühlke who joined the anti-war protest carrying a large European flag, together with his wife KayLynn Collins and their greyhound puppy draped in the Ukrainian national colors. A placard made clear what the dog owners think about the Russian president: "I poop on Putin." 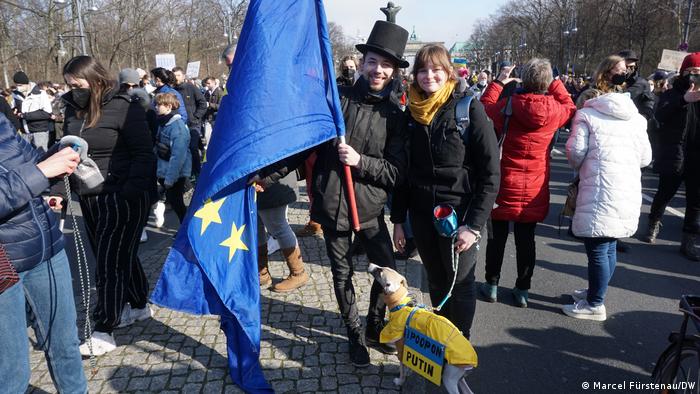 "We feel that freedom and democracy must be defended," Zühlke says, while his wife adds: "We are all human beings and all have the same human rights. Russia stands for trampling on those rights."

When Russia was still the largest republic in the Soviet Union, it fought against Nazi Germany alongside the US, Britain, France and many other countries. The giant Stalinist empire experienced in 1941 what happened to Ukraine in 2022: it was invaded by another country. In the end, in 1945, the Allies defeated Hitler's Third Reich and liberated Germany from Nazi dictatorship, which is commemorated by a Soviet War Memorial on Strasse des 17. Juni.

Yulia Felker and Bernd Völker stand by one of the two Soviet tanks that flank the memorial, holding small white pieces of paper above their heads that read "It's your war, Putin, not of the Russian people." Völker is from Berlin, his wife of 16 years is from St. Petersburg — the site they chose for their protest is no coincidence.

'Ashamed of being Russian'

"On February 24, I was ashamed of being Russian for the first time in my life," Felker says, adding that she's relieved that the pressure on Putin has increased because Western countries have united against the Russian president and Germany is even supplying weapons to Ukraine. "I hope that there will also be a lot of pushback from within Russia — politically and economically," she adds. 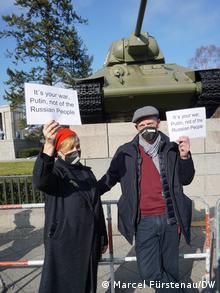 Felker has family in Russia and friends in Ukraine. She says all of them are opposed to the invasion and the violation of international law. She's optimistic that it's a widespread sentiment. "I think that a majority of the Russian population understand that this is a war."

A minute of silence

The Berlin rally was marked by several speeches. The chairwoman of the Council of the Evangelical Church in Germany (EKD), Annette Kurschus, urged people not to fall for hate-mongering and polarization: "We refuse to be sucked into a spiral of hate and violence. We will not give the war-mongering ruling clique in Russia the gift of hating their people," she said. "We will not play the game of making enemies." 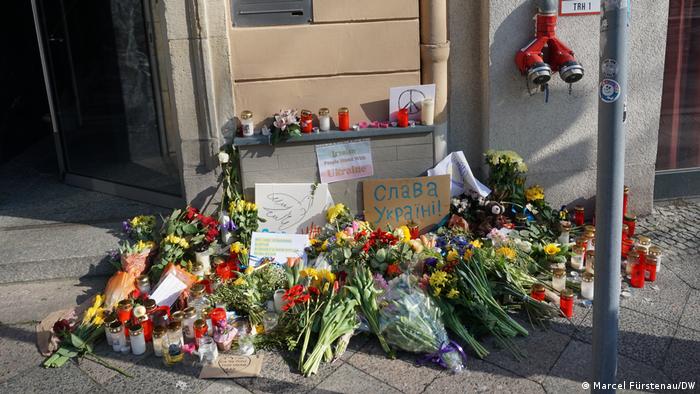 Large loudspeakers were set up everywhere so people could hear the speakers and the music. For one minute, however, the program called for a minute of silence. And there was complete silence, a silence that symbolized the hopes of all the people at the rally in Berlin and in faraway Ukraine — hope that the guns in this war will soon fall silent and that there will be peace again.