Berlin squatters take over series of buildings to protest gentrification

As Berlin grapples with rising property prices, scores of squatters have taken over several residential buildings. In response, the owner of one empty building was willing to grant them a lease — with certain conditions. 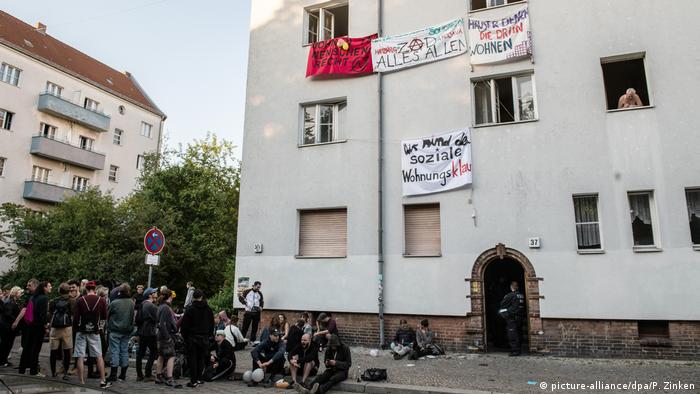 Dozens of activist squatters occupied a series of empty residential buildings in Berlin on Sunday to protest homelessness and a lack of affordable housing in the German capital.

Rental prices have skyrocketed in Berlin in recent years, with one report finding property prices in the capital increased faster than any other major world city in 2017.

The building occupiers issued a statement saying they are staging a "radical intervention against the principle of speculative vacancies."

A spokesman said tens of thousands of people in Berlin are homeless and a growing percentage of residents' incomes is being spent on rising rent prices. It is "illegitimate that houses stand empty" in light of endemic gentrification of the city," he said.

The Left Party said in a statement that it was "hardly possible to find an affordable apartment in Berlin," adding, "Luxury renovation, speculative investment and the construction of expensive condominiums characterize the situation in the city." Nationwide laws protected "private profit for owners and speculators" instead of focusing on people's needs for sufficient living space, the Left said.

The Green Party's state spokeswoman for housing policy told the Berliner Morgenpost the occupation was "good and correct." "As part of a red-red-green (SPD, Left Party, Green Party) coalition, it will give us the necessary pressure to improve our housing policy."

The business-friendly FDP told BZ Berlin: "Once again squatters with criminal motivations disguise their crimes as political action. Homeowners, taxpayers and police officers are the victims. It used to be a political principle not to negotiate with criminals. Red-Red-Green is now renouncing this consensus, with potentially devastating consequences."

Berlin property prices soar - who does the city belong to?

2016: Berlin property prices soar - who does the city belong to?

Gentrification: Berlin, which has long enjoyed rents significantly behind other major international capitals, is finding itself unable to effectively limit price growth. While some policies have freed up housing, prices still increased more than 20 percent last year. There is also a shortage of 310,000 affordable homes in the city, according to some reports.

A history of squatters: Berlin has been a traditional hot spot for squatters, initially driven by the multitudes of empty properties left by families leaving the former East Germany. The practice continues to this day among the far-left scene, although gentrification is increasingly putting an end to it.

The political situation: A coalition of the Social Democrats, The Left Party and the Greens entered office after 2016 elections. The tricky alliance has promised to help ease housing pressure in the city.

Buildings cleared: By late evening, police had most of the buildings cleared. It was unclear if negotiations to house the activists in the nursing home, after necessary renovations had taken place, would continue.

In towns and cities across Germany, rental prices are climbing steadily and real estate is becoming a hot commodity for international investors. Sumi Somaskanda and Nina Haase took a look at the situation in Berlin. (21.07.2017)

German construction companies may no longer be building as many new buildings in the coming years - despite a deepening housing shortage. Experts say there needs to be a "culture change" in how we think about houses. (10.01.2018)