Berlin's governing Social Democrats have voted against expropriating major developers to bring 240,000 apartments under public control. An initiative is campaigning for a referendum on the issue in the German capital. 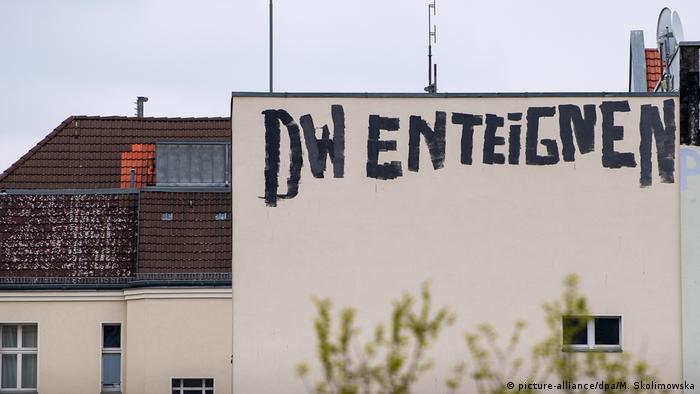 Berlin's governing Social Democrats (SPD) have rejected calls from a citizens' initiative to expropriate any property company that owns more than 3,000 apartments in the German capital, local media reported.

The decision, voted on by delegates at a state party conference on Saturday, puts the SPD at odds with its two junior coalition partners in Berlin's government: the socialist Left party and the Greens.

The three parties made history last week by passing the first-ever rent freeze and cap in Germany, but the prospect of socializing property proved a step too far for the center-left party, despite the acute shortage of affordable housing in the city.

The motion said that such a measure would "not currently be expedient" in the city.

Berlin Mayor Michael Müller, who argued against resocialization during the debate, said that the SPD must maintain its "responsible position" to deal with the housing crisis, which involved "building, buying, capping." That is: encouraging new construction, buying existing housing for low-rent accommodation, and capping rents.

Read more: Berlin tenants fight to save their homes from new buyers

Property back to the people 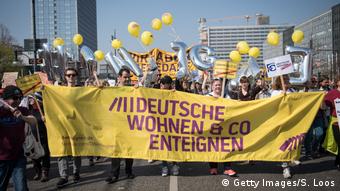 The initiative collected 70,000 signatures in Berlin within a few weeks

It said that the measure would be an attempt to reverse the privatization of public property in Berlin over the past 20 years, which has been blamed for the rise of major private developers like Deutsche Wohnen, and the ensuing spiraling rents. A survey carried out by a real estate portal found that the average rent in Berlin rose by over 100% in the past decade.

The initiative makes a point of stressing that expropriation would not mean simply putting the apartments under state ownership, but creating a new administrative body that would allow democratically elected representatives and tenants to administer the buildings. This would also prevent the state from selling off the property in future.

The campaigners argue that Article 14 of the German constitution, the Basic Law, specifically allows for the expropriation of property: It reads: "Property entails obligations. Its use shall also serve the public good."

Article 15 adds: "Land, natural resources and means of production may for the purpose of socialization be transferred to public ownership or other forms of public enterprise by a law that determines the nature and extent of compensation."

The initiative collected some 70,000 signatures over the summer, far more than the 20,000 needed to force the government to start a legal assessment, which is currently being carried out. Should that conclude that expropriation is legal, Berlin could eventually see a referendum on the proposal.

The campaigners say the expropriation would cost the state between €8 and €14 billion ($8.9 – $15.5 billion), which could be financed through a loan to be paid back with the rental income.

The German capital has become a minefield for renters and the problem is becoming increasingly politicized. But in the Irish capital, Dublin, the situation has developed into a full-blown housing crisis. (22.10.2019)