A tale of two cities′ housing crises: Dublin and Berlin | Business | Economy and finance news from a German perspective | DW | 22.10.2019

The German capital has become a minefield for renters and the problem is becoming increasingly politicized. But in the Irish capital, Dublin, the situation has developed into a full-blown housing crisis. 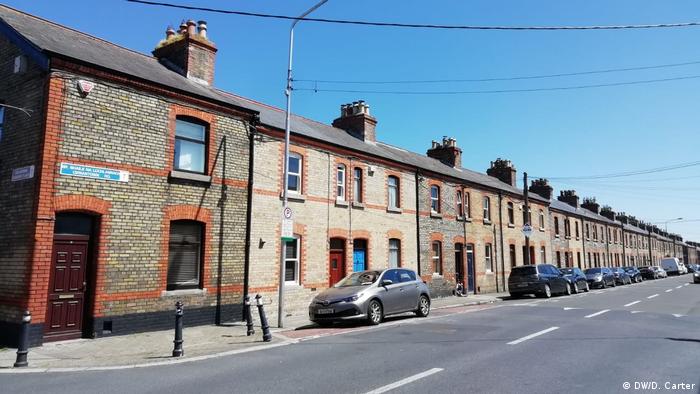 With more than 115,000 residential and commercial properties to its name in the German capital, Berlin, alone, Deutsche Wohnen is comfortably the city's biggest landlord.

Those with shares in the company have had little cause for worry over the last decade — until a few weeks ago. News that the Berlin Senate had inched closer to imposing a five-year rent price freeze saw the company's shares take a dramatic 14% tumble, their biggest two-day fall after 10 years of largely relentless growth.

It was merely the latest skirmish in Berlin's ongoing battle over property.

As a result, Berlin is not an easy city to rent in right now. Deamnd far outweighs supply and rents are rising fast. There is even growing support for a referendum to take place on whether property can be expropriated from large landlords and turned into social housing stock.

Yet if renters in Berlin think they have it tough, they should look a little further west, to the Irish capital, Dublin. The city, and to a slightly lesser extent the entire country, is in the middle of a housing crisis that makes the problems in Berlin look almost quaint.

Kick back and watch the washing machine

"This is the worst housing crisis we have ever had in the history of the state," says John Bissett, a long-time housing activist who currently campaigns with a group called Housing Action Now.

Horror stories from the Dublin housing market abound. For renters, the situation is particularly difficult. Rents in the city are now among the highest in all of Europe, and rising steadily (see graphics). 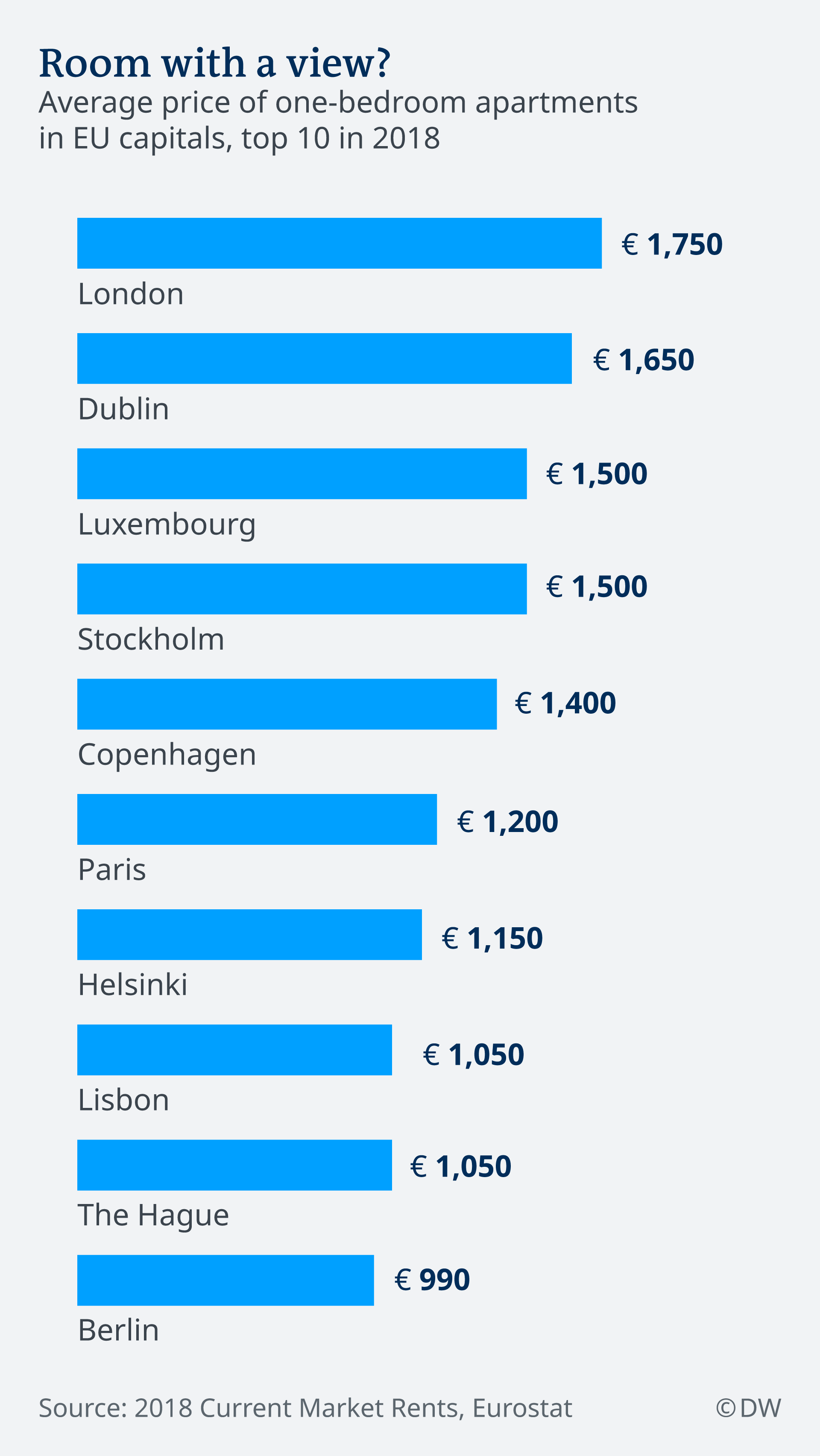 Rents now far exceed what they did at the height of Ireland's property bubble more than a decade ago. They have risen by 37% since then, with prices for two-bedroom apartments in the city now routinely available for more than €2000 ($2257) per month.

To give an illustration of how unaffordable basic housing has become in the city, a scan through Ireland's biggest property website Daft.ie is instructive.

One recent example, although not untypical, garnered considerable attention. Described as a studio apartment in the city center, what was on offer was essentially a small kitchen with a bed placed in the middle of the kitchen, facing the sink and washing machine.

Priced at €750 per month, the listing described the flat as being "finished to the very highest of standards." 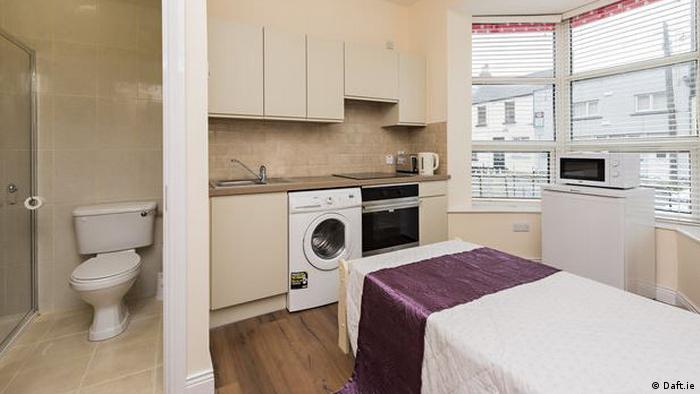 This apartment, listed on the Irish property website Daft.ie, was available for €750 per month

A housing crisis and a homeless crisis

For Bissett, extremely high rents stem from both a lack of housing stock and in some cases "pure greed" on the part of landlords. But difficulty for renters is only one part of the problem in his view. He says the Irish state needs to urgently build more social housing.

At the moment, close to 50,000 people in Dublin are on waiting lists for social housing while more than 10,000 people are homeless, including some 4,000 children. Many of them are living in hotels or so-called "family hubs," which are essentially crowded emergency accommodation shelters.

During the financial crisis a decade ago, Ireland's property bubble burst, plunging the country into a deep recession. One of the curious consequences was that housebuilding came practically to a halt in the country. Bissett says that the building of social housing by the state, already in decline by that stage, was particularly hard hit. 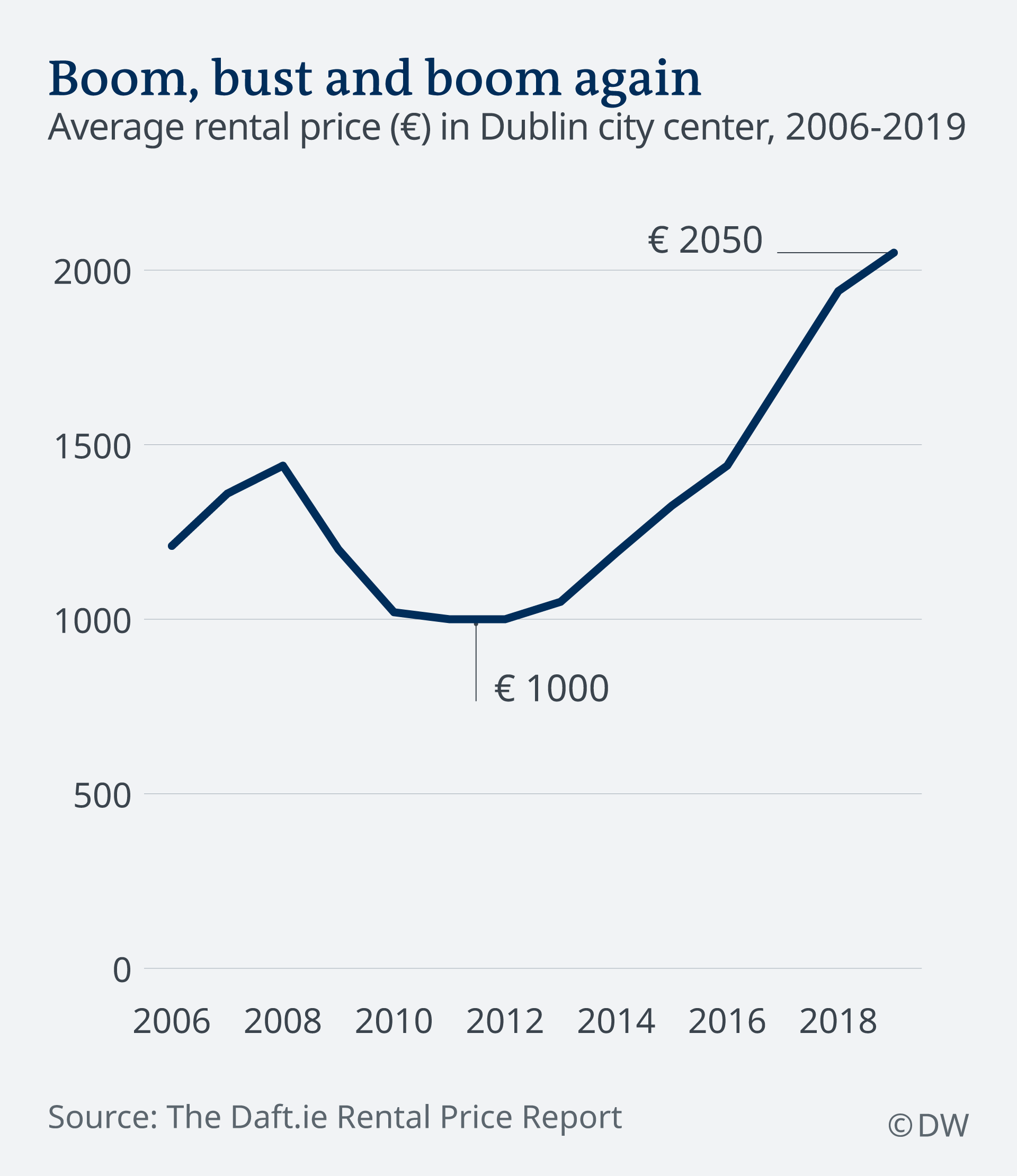 "We stopped building public housing to any degree and have moved to a market, commodified model of housing," he says.

He believes the state has sufficient land to engage in mass public housing building, and could fund construction through both state resources and lenders such as the European Investment Bank.

"But there is a real resistance to that," he says. "Ireland is a neoliberal, commodified state, commodified economy. The political parties are wedded to that model. 'We live and die by the market' is the message, and many people are suffering because of that."

Most people involved in property and housing in Dublin agree on what the main problem is — years of sluggish construction rates have led to a woeful lack of housing stock, whether social or private, to buy or to rent.

But there is disagreement over how to solve the problem.

Marian Finnegan, chief economist with Ireland's largest residential estate agency Sherry Fitzgerald, says the collapse of the Irish property market more than a decade ago scared investors off, leading to a dramatic dearth of supply. That problem lingers, she believes. "Our private investors are not getting a return as it stands from their investment and they are leaving," she says. 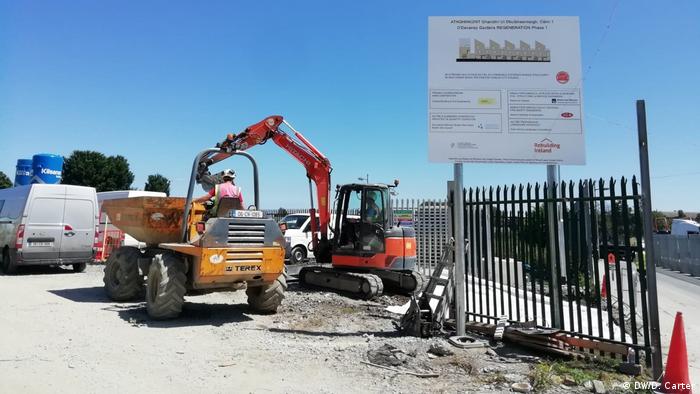 After years of stagnation, the number of new houses being built is rising in Ireland. But it is happening at a slower pace than demand requires

While there has been a gradual rise in the amount of large institutional investors entering the Dublin property market — such institutions bought 11% of property sold in Ireland last year, according to Savills — she says it is still a "slow burn" and that they have not yet greatly influenced the amount of new housing stock.

Ronan Lyons, Assistant Professor of Economics at Trinity College Dublin, says the housing crisis in Dublin and lack of supply has roots which go far deeper than the recent property crash and financial crisis.

"Up until the late 1980s, it had been the case in Ireland that there was weak housing demand in general," he says. "We lost people every year to emigration and were a net exporter of people for centuries. Only in the last 30 years has Ireland had to deal with a growing population and therefore to deal with challenges that other countries in Europe have had to deal with for a bit longer.

"So set aside the credit bubble and crash, from 2000-2012, and really this is the culmination of a problem that has been growing for 30 years."

For John Bissett, he believes looking to the market to solve Dublin's housing problems is foolish, considering what happened 10 years ago.

"After what happened here ten years ago,if we think logically that's the way to run a housing system, it's mad. Certain groups will benefit from such a system but the vast majority will not. The market does not self-regulate. And the cost on the lives of ordinary people is enormous." 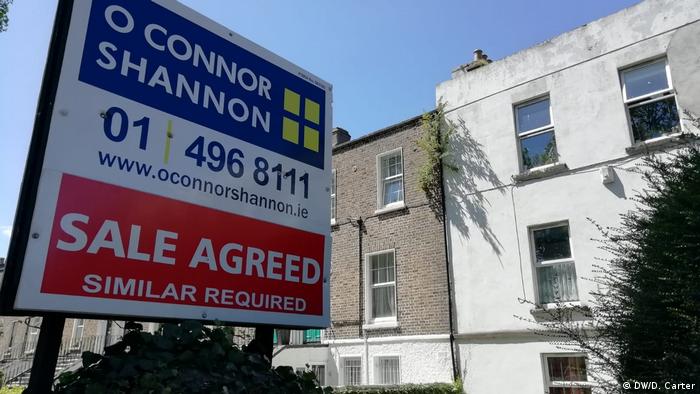 Purchasing a home is now out of reach for many people in Dublin, meaning more and more people are renting

For him, the key to solving the crisis is that the state needs to own more property. He points to Vienna as an example to follow, a city with a very high standard of living where close to 60% of the city's housing is in public ownership — in sharp contrast to Dublin where it is now less than 10%.

He is optimistic that one day Ireland can develop a healthy and sustainable system of housing. But he believes that a key problem at the moment is that the cost of construction, particularly of much needed apartment buildings, has become unviable due to high construction costs.

He says that while house prices fluctuated, building costs steadily climbed, particularly those associated with increased regulation. "The minimum standards in Ireland are now among the most onerous in the world," he says. 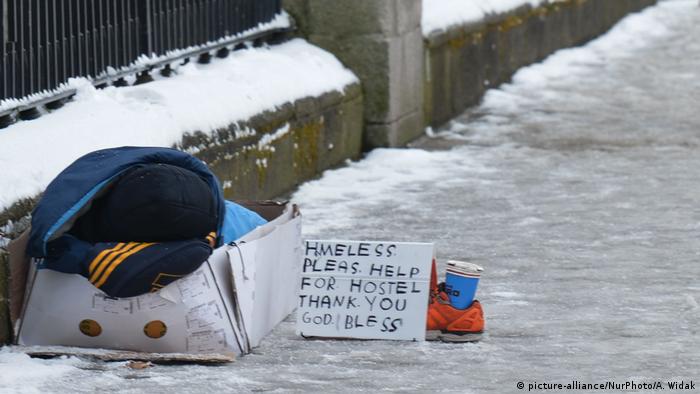 Homelessness is becoming a major issue on the streets of Dublin

He also believes more flexible use of urban land is required in Ireland, to encourage more high-rise development and less sprawl in a country whose few cities are famously low-rise.

He also emphasises the need to develop sustainable housing for low-income people who require social or subsidised housing. Like Bissett, he points to Austria, where cost rental systems allows someone's disposable income to be linked to the rent they pay, so their income is topped up accordingly by the state. "You need to have a system of place where they can access housing," he says.

Berlin to Dublin and everywhere in between

While John Bissett says Dublin's housing crisis has its own distinct characteristics, he sees plenty of similarities with what is happening in Berlin, from where he has just returned from an event which brought together social housing activists from across the continent, in an attempt to unify and coordinate their efforts.

"In the rental market it's become about making huge amounts of money," he says. "The market is not looking after need. It's looking after income streams and the rate of return on investment, that's its first priority."

"And this problem of a completely commodified housing system is not unique to Ireland. It's a European problem. We need solutions here but we need European solutions as well."

Vonovia is not concerned the 10% rent freeze planned by Berlin's city government for the next five years will dampen profit forecasts. But it did warn that money for renovations could be spent elsewhere. (25.06.2019)

The US tech giant has planned several hundred new jobs for the new office. Locals have rejected Google's previous plans for a start-up campus over concerns for their rent and livelihoods. (02.06.2019)

Investor Warren Buffett's real estate arm has entered into a franchise deal with a firm that sells high-end Berlin apartments. But one property analyst told DW that the billionaire may have missed the property boom. (06.03.2018)