Berlin's Tierpark Zoo has said that the baby polar bear born just last month had died of unknown causes. Another cub from the same mother had died earlier last year. 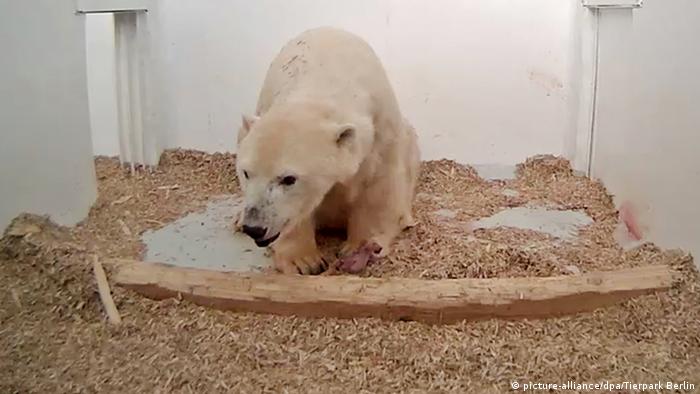 German officials at Berlin's Tierpark Zoo said they had found the baby polar bear's lifeless body on Tuesday just before reopening the zoo for the new year.

The cub's death came as a surprise to officials, who said that the young animal, which hadn't yet been named, had appeared to be healthy when last seen suckling from its mother, Tonja. The zoo had remained closed from New Year's Eve until Tuesday.

Read more: Dead rhinos, penguins, polar bears in zoos - why do we get so upset about animal stories?

"We knew that young animal mortality is very high in the first weeks, but even so we are dejected and it makes us sad," said Berlin zoo's polar bear curator, Florian Sicks.

The mortality rate among young polar bears is around 50 percent, and even higher during the first 10 days.

"Now we have to evaluate the footage from the surveillance camera and wait for the autopsy report," said zoo director Andreas Knieriem. The young bear's autopsy is being conducted at the Leibniz Institute for Zoo and Wildlife Research, Knieriem added.

The cub was set to be unveiled to the public in the spring. The young bear's birth was met with euphoria from zoo officials, after acub from the same mother had died last March from unknown causes, aged just four months. The birth of that young bear, known as Fritz, was met with a flurry of media attention before his untimely death.

Read more: 'Polar bears should not be kept in zoos at all,' says the German Animal Welfare Association

From 2006 to 2011, the Tierpark zoo's most famous resident, a beloved polar bear named Knut, attracted crowds of adoring fans and brought the zoo millions in revenue. Knut also died prematurely at the age of four due to a brain inflammation.