The four-month-old cub's death has mystified Tierpark zoo officials. Fritz was to make his public debut at the zoo in the German capital in March.

Baby polar bear from Berlin finally has a name

Polar bear cubs like Fritz of Berlin's Tierpark are cute and enjoy popularity. But is a zoo really the right place for them? (07.03.2017)

Berlin's Tierpark director has said he hopes Fritz will survive the night after he was found listless in his pen. Veterinarians are still perplexed as to what caused the four-month-old polar bear cub to become so sick. (06.03.2017)

In a press conference in Berlin on Tuesday afternoon, Berlin Tierpark director Andreas Knieriem expressed bewilderment as to what could have led to Fritz's death the previous day.

Knieriem could only confirm that the baby bear's liver was massively inflammed and enlarged on Monday, a sign of serious infection.

However, the root cause remains a mystery.

"At this time, we cannot say where the inflammation came from," Knieriem said.

"We are still feeling around in the dark."

Animal researchers at the Leibniz Institute for Zoo and Wildlife Reseach will now search for the inflammation's underlying cause in a potentially drawn-out process including extensive postmortem examinations and blood and tissue analysis. 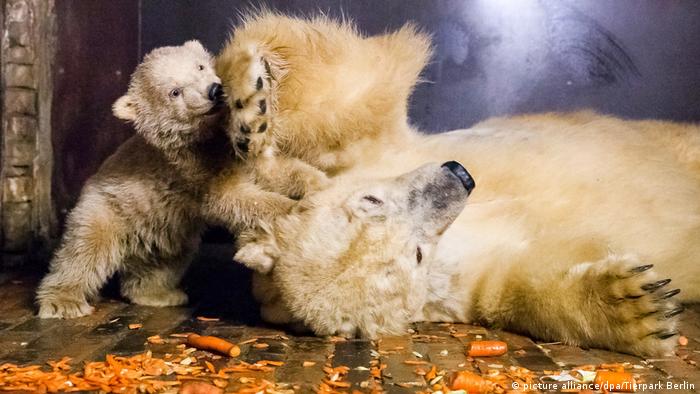 Fritz and his mother Tonja play in the Berlin Tierpark

After lethargic behavior over the weekend, Fritz was found on Monday morning lying unresponsive next to his mother Tonja. Veterinarians at the nearby Leibniz Institute undertook a slew of medical procedures on the listless baby bear including x-rays, ultrasound tests, CT scans and the delivery of narcotics.

Fritz began struggling to breathe around 7:30p.m. local time (1830 UTC). In the end, neither a cardiac massage nor the delivery of oxygen managed to save Fritz's life. He died around 8:00p.m. (1900 UTC), the zoo reported.

Many mourn for the baby polar bear

"We are speechless, very sad and depressed," Knieriem said earlier on Tuesday in the zoo's initial written announcement of the baby polar bear's death.

"It is unbelievable how fast this little polar bear captured our heats," Knieriem added.

The recently-named Fritz was born on November 3 last year along with a sibling, who died shortly after birth. The fuzzy cub was the Berlin zoo's first baby polar bear born in 22 years.

Fritz, who was to make his public debut in March, had gained a fan following through video recordings that the zoo published on the internet.

Germany's capital city was previously home to the polar bear Knut, whose death at four in 2011 due to an autoimmune disease left his fans worldwide in mourning. Knut was born at Berlin's other zoo, the Berlin Zoological Garden.

Baby polar bear from Berlin finally has a name