Berlin in bondage: a sexperiment

"Poor, but sexy" is no understatement for Berlin. Since the Roaring 20s, the German capital has been known for its anything-goes take on sex. As DW's Janelle Dumalaon found out, sexual freedom can come with restrictions. 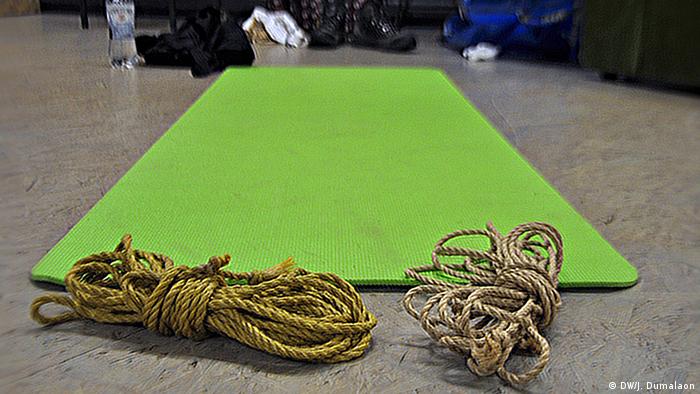 It's the middle of the week and I'm hanging suspended from a ceiling somewhere in a converted hangar complex in Berlin-Wedding. Ropes crisscross my chest and waist and I'm trying to concentrate on ways to describe the sensations I am experiencing.

"How are feeling?" asks Tim, my partner.

And that's me - 28 years old, educated in a Jesuit Catholic school, and raised with the conservative, traditional family values considered the bedrock of society in the Philippines, where I'm from.

Now, I wouldn't consider myself conservative by any stretch. I find Berlin's sexual openness and embracement of nudity a refreshing contrast to my personal background of Catholic, abstinence-only education, where skin is a letter away from sin. Nevertheless, Berlin will challenge just about anyone's opinions on sex.

Not far from where I live in Berlin, there's Other Nature, which describes itself as a "feminist, queer-oriented, eco-friendly, vegan sex shop." I've been inside a few times, marveling at the array of alternative menstrual products and environmentally friendly sex toys.

I've wondered what would happen if someone put up a similar shop in my neighborhood in the Philippines, where everyone sees everyone at church. "These sex toys are immoral!" I can hear my neighbors shouting. "Why? They're eco-friendly!" the well-meaning but culturally uninformed proprietors would reply.

It's not like I've seamlessly blended into Berlin's freewheeling sex life. I have yet to visit - even as a spectator - the KitKat Club, famous for the unfettered sexual activity among its patrons. I also don't really see myself ever playing naked volleyball in the park. 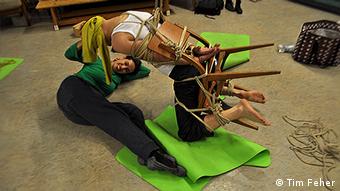 A mat and strong ropes are essential to shibari yoga

But until recently, bondage yoga wasn't on my to-do list either, but here I am.

But I'm not convinced that it's a perfect fit. To my mind, yoga is about movement, bondage about restriction. One evokes images of peace and serenity, the other of pain and violence. However, I've been told they're not that different.

Rewind to earlier that evening. I am sitting in a café with Dasniya, a ballet-dancer-model-yoga instructor-bondage artist.

"Yoga is bondage," says Dasniya. "Yoga can be brutally painful; meditation can be quite intense and difficult. Bondage can be quite calming and comforting, an exercise of trust. It's not about harm."

"It's a lot of playing with identity," she explains.

How does her family feel about her combining their spiritual tradition with bondage? She smiles:

"They don't really want to know what I'm doing in detail. They just want to know I'm spiritually and mentally happy."

Minutes later, I'm sitting cross-legged with around 15 other participants on neon-green yoga mats, with two small bundles of rope neatly arranged before each of us. We start with breathing exercises and make our way through different standing yoga poses, or asanas. Seated again, we are asked to unravel the rope bundles, and rub the tangled mess on our bodies.

I self-consciously rub a fistful of rope under my armpits, like everyone else. I sneak a look at Tim, who is sneaking a look at me. We both visibly try, and fail, to suppress giggles. I look at Dasniya, fully expecting a look of disapproval for blocking the class's collective spirit, or whatever you get in trouble for in yoga bondage class.

But she's smiling, and I'm relieved to know we're allowed to laugh. It's permission to deal with my staggering awkwardness, and I take it with relief.

We use the rope in other ways, standing and hooking the rope under our feet while standing, pulling its ends to help us stretch further downward, or stretching our legs to our faces while lying on our backs.

Yoga is brutal, I think to myself. But I would feel a lot more meditative if my hamstrings weren't screaming.

Eventually we come to the shibari part, which involves using the ropes in intricate ways to encase a person in aesthetically pleasing knots - which are also strong enough to hold that person suspended from the ceiling. 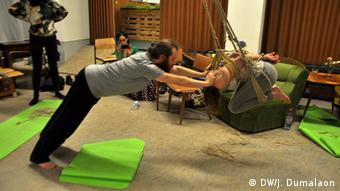 Knotting the ropes just right is an art in itself

"Think of the ropes as a particularly firm hug," Dasniya said. A quick conference, and Tim and I agreed I would be firmly hugged first. The knots were easy work for him.

Soon, my ropey hug was knotted to other ropes suspended from a metal ring dangling from the ceiling, and then I was dangling too. Now what? To my right, a woman was lying close beneath her suspended partner, rocking him softly. I looked for Dasniya. Her partner was tied to a chair, both suspended and pitched forward. The emerald green sweater Dasniya was previously wearing over her shirt was arranged over her bound partner's eyes.

"Maybe I can play Superman?" I ask Tim. He sighs, but gives me a push. I swing heavily through the air with my arms outstretched. Soon I've had enough of being neither bird nor plane, and think it's my turn to do the tying.

But I have a harder time with the knots than Tim did, and I feel like I've just failed spectacularly at a macramé class. He sits patiently as I loop a rope around his chest and shoulders and mutter instructions to myself. Man, was I sexy.

"I'm a little bored now," Tim admits, after one side of my creations sags downward in a clear case of faulty rope engineering. But perseverance triumphs over butter fingers and I finally have Tim up on the ring. I gather him in my arms, run, and release him with a flourish.

Tim crashes into some chairs before swinging wildly back to the starting point. I scramble to take the chairs away before he swings back.

At least we got the Rule Nr. 1 right: Have fun. It was the space I found to be who I was - a little stiff, too self-conscious for great displays of physical emotion, but curious enough to experiment in ways I wouldn't have in the Philippines.

Maybe someday I will be able say, "body-bound, but spiritually sound" and maybe even mean it in a shibari yoga context. But for now, I have tried another way to get to know myself in Berlin, in a way that I may never have tried at home. If shibari yoga has taught me one thing, it's that sexuality and spirituality are flexible concepts to be shaped by choice, practice and curiosity - and that even restriction can be liberating.