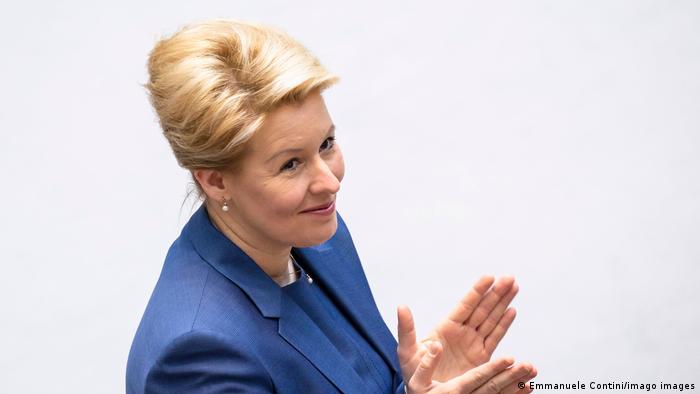 Giffey received 84 votes, and needed 74 for her election as mayor

Berlin's city-state parliament swore in Franziska Giffey as mayor on Tuesday after a vote by delegates in the House of Representatives.

The decision makes the regional leader of the Social Democrats (SPD) in Berlin the city's first elected female mayor.

House speaker Dennis Buchner said 84 deputies had voted for Giffey, while 52 voted against her and two abstained.

Giffey, who served as Germany's family minister until her resignation in May this year, had needed at least 74 votes for her election. She now heads the German capital's local government, made up of a coalition of the center-left SPD, environmentalist Greens and the socialist Left Party, which together has 92 deputies.

Giffey resigned from former Chancellor Angela Merkel's last government amid allegations of plagiarism in her doctoral thesis. She was later stripped of her doctorate.

Before joining the national government in 2018, Giffey had previously been known to many Berliners as the mayor of the German capital's Neukölln district.

In her new role, Giffey has identified housing as a top priority. Rising rents are a hot topic in Berlin.

Giffey's government will need to decide how to act on the result of a nonbinding referendum in September, in which voters backed a call for the city to expropriate some 240,000 apartments from corporate owners.

Some 56% of those who voted were in favor of the move against real estate companies with more than 3,000 properties.

Giffey has spoken strongly against expropriation. The decision, voted on by delegates at a state party conference on Saturday, puts the SPD at odds with its two junior coalition partners in Berlin's government.

The three parties signed a road map on Tuesday calling for a public-private "partnership for new construction and affordable housing."

While Giffey is the first woman to be elected as mayor of Berlin, the SPD's Louise Schroeder did serve as acting mayor from May 1947 until December 1948. Schroeder had been deputy mayor and was appointed to the top job after the first post-World War II mayor resigned.