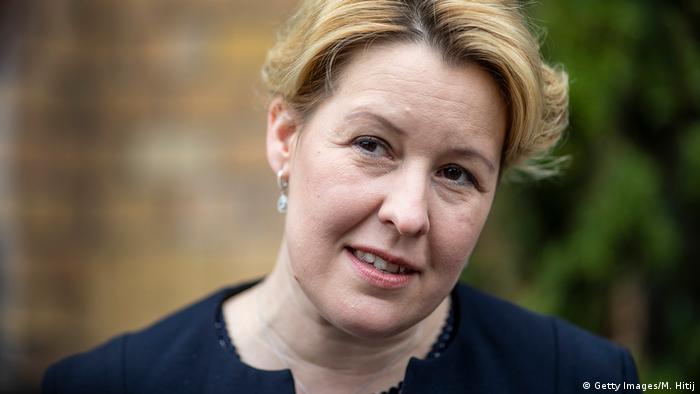 Giffey stepped down from her cabinet post in May

The FU said Giffey's qualification had been acquired by "deception over the independence of her scientific achievement." Texts and literature had been inserted without sufficiently crediting those authors, it found.

The center-left Social Democrat (SPD) resigned from her post as German federal minister for families and women in May over the plagiarism allegations.

She had declared last November that she would already stop using the title and would resign from the cabinet if her Ph.D was revoked.

What was wrong with Giffey's thesis?

An academic scrutiny platform VroniPlag had asserted that some 49 of 265 pages of Giffey's thesis included unattributed quotes and copying-and-pasting from other works.

Giffey, however, said in May that she wrote the thesis "to the best of my ability," adding: "I regret it if I made mistakes in this." Popular among Berlin's Neukölln district before becoming a member of Chancellor Angela Merkel's coalition cabinet, Giffey has focused in recent months on her leadership of the capital's local Social Democrats.

In April, they nominated her as their candidate to succeed incumbent SPD mayor Michael Müller, who is not seeking a further term.

As Giffey quit cabinet, Merkel, although of the rival Christian Democrats (CDU) said she accept the 43-year-old's resignation "with great respect," praising Giffey's "passion and skill."

A half-dozen German politicians have been accused of PhD plagiarism in the last two years. DW takes a look at why doctorate titles are in demand in Germany and why politicians and people are so keen to get hold of one.