Germany has welcomed a planned rise in US gas exports to the EU. But combined with Washington's opposition to a Russian-German gas pipeline, the move highlights Berlin's complex position between Moscow and the US. 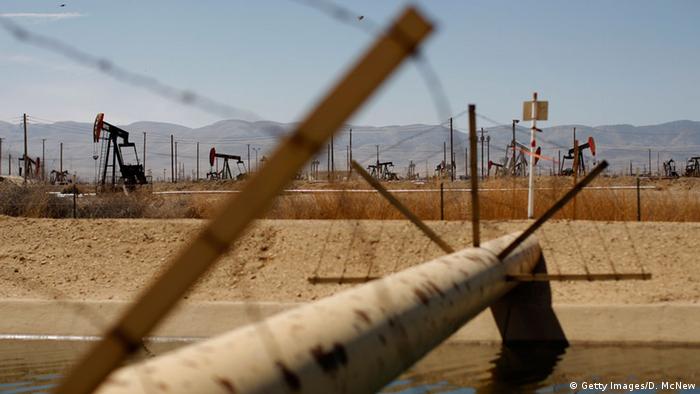 With its last nuclear plant shutting down in 2023, coal in seemingly terminal decline and the phasing out of Dutch gas, Germany faces a medium-term challenge of how to secure stable energy sources and manage the fickle nature of solar and wind plants.

One of the options has been an extension to the Nord Stream gas pipeline from Russia, so-called Nord Stream II. Germany is the biggest client of Russian state-run export monopoly Gazprom and the pipeline would double Russian gas exports. But the project faces opposition from the US, Poland and Lithuania and some in Germany.

The simultaneous boom in US, mainly shale, gas has also created a new source of cheap global supply that is changing energy consumption habits — and geopolitics — globally.

It is in this context that Germany announced plans to build a $500-million (€420-million) liquid natural gas (LNG) terminal on the Elbe river in the north of the country. Brunsbüttel would be Germany's first such plant and if all goes to plan would be open by the end of 2022.

The German Ministry of Economy and Energy later said it supported private initiatives for Brunsbüttel. "The terminal could help to avoid dependences and diversify energy supply. Moreover, it would contribute to security of energy supply, since it offers access to the global LNG market for German clients," German LNG Terminal spokesperson Katja Freitag told DW.

A final investment decision is expected at the end of 2019, Freitag added, while several memorandums of understanding have been signed with companies from various branches from regasification to LNG distribution services.

Not far from an old nuclear reactor, the terminal would be within reach of Scandinavian markets and the Baltic States via the Kiel Canal. It would be able to import as much as 5 billion cubic meters per year, or about 10 percent of Russia's current annual deliveries to Germany.

US Department of Energy Secretary Rick Perry has said moving US energy supplies into Eastern Europe is one a way of containing Russian influence.

Meanwhile, Kurt Volker, the US special representative for Ukraine, said this week the Trump administration is weighing sanctions on European corporations working with Russia. The targeted companies — ENGIE, OMV, Royal Dutch Shell, Uniper and Wintershall — have agreed to lend Gazprom $950 million for construction of Nord Stream II and have extended the repayment period until 2035.

"The State Department has a long history of voicing concerns over European dependence on Russian natural gas, and has gone to lengths to stress that these concerns are not related to US LNG exports," Tim Boersma, an energy expert at Columbia University, told DW.

"This narrative however has been called into question in parts of Europe, including Germany and Russia. This is chiefly based on statements from former Secretary Rex Tillerson, and also the president, who have explicitly linked concerns over Nord Stream II with the possibility to buy more US LNG instead Boersma added.

By the end of the decade the US is expected to have five major LNG export projects operational, becoming the third largest LNG exporter after Qatar and Australia.

"I think the US may well increase LNG exports to the EU, as a result of the fact that more LNG liquefaction capacity is still planned to come to market in the near future, and those cargos will be searching for a home," Boersma added. And all of these factors are making an impact on geopolitics.

"The US is poised to be a gas exporting giant for decades," said Jack Belcher, executive vice president of HBW Resources. "What seemed impossible a few years ago is today true: The US is now competing with the Middle East in the global gas export market."

But American LNG is still at a cost disadvantage compared to Russian piped gas. Gazprom has been forced to lower its prices in recent years to protect its market share in the face of moves by EU member states to buy more gas from the US, Qatar and other producers.

Russia's gas exports to Europe rose 8.1 percent in 2017 to a record 193.9 billion cubic meters, with Gazprom holding an effective monopoly over Russia's network of pipelines to Europe, supplying 40 percent of Europe's gas.

US and Russian gas compatible

"The two sources can be complementary and the more diversification the better," Kirsten Westphal, senior associate at the German Institute for International and Security Affairs, told DW.

"An LNG Terminal in Germany is interesting, but not a necessity as Germany is well connected to other LNG terminals and thus flexibility in the integrated north western European market is high," she said.

"In the case of natural gas, cheap Russian gas could be used for the baseload and spikes and peaks could be managed using US LNG."

German energy major Uniper CEO Klaus Schäfer said in 2017 the US was forcing its gas onto European markets. He said, however, that the company was not against US LNG imports to Europe.

"We ourselves have contracts to export US LNG," Schäfer said. "This concerns our long-term contracts, but also the new contracts we recently signed, for example for US LNG," he went on.

The US natural gas "revolution" has already benefitted European gas consumers: Gazprom has been obliged to lower the prices of many of its long-term contracts with European customers.

Lithuania, which said it was paying the highest price for Russian gas in the EU, got a 23-percent discount on Gazprom's supplies just before opening its first LNG terminal, Independence, at the port of Klaipeda in 2014.

Meanwhile, Poland's state-owned oil and natural gas company PGNiG signed a five-year deal to import LNG from the US in November 2017. The agreement is between PGNiG and Centrica LNG is for shipments between 2018 and 2022.

Poland opened an LNG receiving terminal on the Baltic Sea in 2017, and the state-owned oil and gas firm PGNiG received its first LNG shipment from the US last June as part of a spot-market deal, shortly before Trump visited the nation.

"From a Polish point of view, reducing dependency on Russian gas imports is naturally a positive direction of development," Jan Mus, an international relations specialist at Vistula University in Warsaw, told DW.

"However, in the perfect world this dependency would be replaced with diversification of supplies, possibly coming from several neutral countries. Arguing that Gazprom is a political weapon, while Centrica LNG has purely economic goals is naive. Depending on US deliveries of gas would push Warsaw away from Moscow's grip and straight into a very narrow gap built by Trump's administration."

Asked about sanctions for firms involved in Nord Stream II, Westphal said it was far from clear the sanctions would go ahead and if they did, how they would be linked to specific political breaches.

"The divisions surrounding Nord Stream II are driving wedges inside the EU, inside Germany. and inside parties within Germany, but US policies do so as well," Westphal added.