At Berlin's international dance festival, choreographers tackled issues like the Islamic veil and the failures of the international community in upholding human rights. The result wasn't necessarily comfortable. 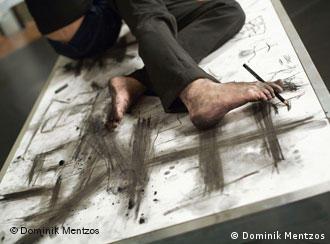 With his hands tied behind his back and a stick of charcoal between his toes, a dancer painstakingly writes one word in an article of the Universal Declaration of Human Rights.

He is one of dozens of dancers performing in the installation piece "Human Writes," a collaboration between choreographer William Forsythe and legal scholar Kendall Thomas from Columbia University in New York City.

With their work, which was performed at Berlin's international dance festival Tanz im August, closing Friday, their aim is to get the audience to think about everything that inhibits the protection of human rights.

During the performance, the spectators see a huge room with about 40 tables covered in white sheets of paper. Some of the tables are on their side, standing on end, or in states of movement. The dancers, whose hands, faces and bodies are smudged with black charcoal, ask the audience members for help in writing the articles of the Universal Declaration of Human Rights - a document ratified by the United Nations in 1948.

One woman tries to write on a table, but it keeps moving as it is pushed and pulled by dancers at each end. Some dancers have their hands tied behind their backs and a stick of graphite in their mouths or between their toes. Others have their eyes closed and have to be verbally guided to write on the paper. 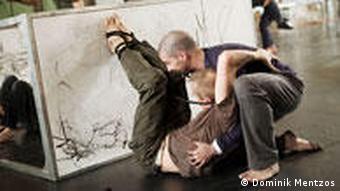 The dancers aren't only hindered by outside influences in writing down the historic human rights declaration, they also quarrel amongst themselves and with the audience, obstructing their own goal.

The poignant parallels to real-life politics are hard to miss.

"Everybody should be dealing with the attempt to put human rights into practice," said Pirkko Husemann, one of the dance festival's curators. "It's not just a field for lawyers, but is a part of everyday life."

For "Human Writes," Kendall Thomas drew inspiration from the work of Arch Bishop Desmond Tutu and his colleagues in the South African Truth and Reconciliation Commission, and explained that the performance tries to highlight "the gap between the humanity to which we aspire, and the inhumanity that inhabits human societies everywhere."

During the performance, some audience members seemed confused. Others looked on with amusement. Many were too shy to help out, but Stefanie Haumer, a human rights lawyer with the German Red Cross, was among those who got in on the action and grabbed a piece of graphite.

Haumer agreed that dance can be a good vehicle to discuss political issues, especially since it circumvents a language barrier. But she also said that sometimes she doesn't want to "be confronted again with all the bad things in the world" on a Saturday night, after being confronted with difficult human rights issues all week at work.

Confronted with the veil 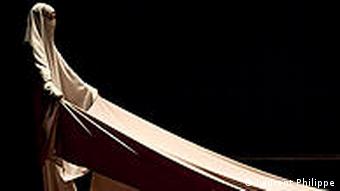 "Manta" was criticized for being one-sided

During the festival, another work called "Manta," by Paris-based choreographers Hela Fattoumi and Eric Lamoureux, put the Islamic veil in the spotlight.

The performance begins with Fattoumi sitting beside her laptop and doing a Google search on the burqa, which is projected onto the wall behind the stage. Images and articles come up depicting women wrapped in cloth, as well as arguments for and against the veil. Then she clicks on a short YouTube with a tutorial on how too apply Arabic-style eye make-up.

Then Fattoumi covers herself in layers of white cloth, leaving only her eyes and hands visible, and attempts a kind of reverse belly dance. The result elicits chuckles from the audience. They stop laughing, however, when she comes to the front of the stage fully veiled and stands for an uncomfortable five minutes staring directly at the audience.

"It's about emancipation of a woman," said Fattoumi, who performs alone in the work, "when you are in a kind of jail, how can you find the way to open this jail?"

She dedicated the piece to all the women who are forced to wear the niqab, a head-to-toe covering, and who suffer underneath it. As a child growing up in Tunisia, Fattoumi remembers playing with her grandmother's veil, but has never worn one herself.

Getting past the symbol

"I can imagine what she can feel and wants to demonstrate on the stage, but I think that some parts of her piece wouldn't fit with the feelings of women who wear burqas," said Tuba Isik-Yigit after watching "Manta." 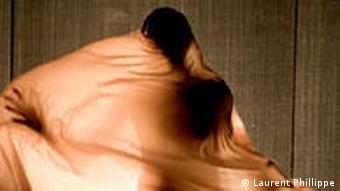 Born in Germany with Turkish heritage, Isik-Yigit is a PhD student at Paderborn University and a research assistant in Islamic Religious Education. She wears a headscarf for religious reasons.

In a panel discussion following the performance, both Isik-Yigit and Riem Spielhaus, a researcher in Islamic Studies from the European Center for Islamic Thought in Copenhagen, said they felt it was too one-sided.

"The message is that the Muslim woman is the victim of violence - most probably domestic violence - and that by unveiling her, she will be freed of the violence," said Spielhaus, arguing that this logic doesn't apply: "You can free the woman from the veil and she will still have to endure violence; so let's talk about the violence and not some kind of a symbol."

The theme of human rights wasn't something the festival deliberately set out to explore, but curator Pirkko Husemann said they noticed it was a recurring theme in the work of a number of contemporary choreographers.

"The artists mostly ask questions. Its not that they give answers to all these really big and important issues like oppression or imprisonment, suppression of religion," said Husemann, but they highlight certain things "and make us reflect on how to relate to all these political issues."

One of the European Union's main tenets is the promotion of democracy and human rights, but citing Libya as an example, Amnesty International says the bloc's deeds don't always live up to its words. (07.07.2010)