A theater group is challenging Germany's assumptions about race, culture and identity with a courageous new production that sheds light on the black German experience of everyday racism. 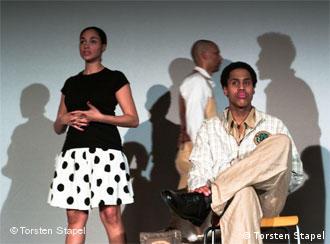 "My, but you speak excellent German - flawless grammar, perfect accent. Keep up the good work!"

The elderly lady with a prim hat and pursed lips tries to compliment the young black woman sitting on the park bench beside her, but her praise backfires when it's obvious that she can hardly grasp the notion that a person of color can be German at the same time.

This scene is one of a dizzying array of sketches that combine humor and poignant realism to mirror part of the black/Afro-German experience with unsettling clarity.

"Heimat, bittersuesse Heimat" - which translates to "Homeland, Bittersweet Homeland" - blends scenes of daily life with satirical theater. The actors play themselves as well as their white fellow citizens, whose well-meaning questions and remarks often come across as ignorant, invasive and presumptuous.

Audience reactions to the racist gaffes on stage ranged from hushed embarrassment to howls of laughter.

"If you have black friends, they're just laughing," said Vanessa Rottenburg, who plays the Afro-German in the park bench scene, "because their reaction is: 'Oh yeah, I know that grandma.'"

The play's characters stretch across the political spectrum and span generations. Whether it's a stuffy German bureaucrat working at an institution for integration or a "friendly" playground dad who belittles a child of mixed heritage - no one is let off the hook.

As the audience is invited to "witness" such burdened interactions from the perspective of a person of color, individuals might come away with a sinking feeling that some of their own well-meaning comments in the past have come back to haunt them.

In a street scene, a 30-something German with reggae music blasting out of her headphones is determined to bond with an African woman waiting for the same bus. Gushing with praise and patronizing familiarity, the xenophile tries to pigeonhole her fellow passenger, convinced she knows the woman's origins.

"You must be from Guinea Bissau, because I have a friend who looks just like you," she says excitedly, oblivious to the fact that her seatmate would rather read her book undisturbed.

Confronted with these kinds of awkward exchanges on a regular basis, members of the cast said it's not difficult to get into character. Playing out real-life situations on stage can be liberating.

"Most of the time you're making fun of these people and of course you're hurt; you're looking for a way to work through it," said actress Dela Gakpo. "Instead of just feeling fed up, this is a way to turn it around."

The theater piece offers a sense of empowerment to 21-year-old actor Jonathan Kwesi Aikins. "When we're playing these scenes, we're getting tools to help us to act and react in those situations," he said.

No passport for emotional and cultural identity

In an early scene of "Bittersweet Homeland,” the actors waltz in pairs to the lilting strains of Johann Strauss' "Blue Danube." When the music segues to an upbeat Angolan song, the cast breaks into freestyle African dance. The message is clear: Multiple cultural anchors needn't be mutually exclusive.

"We wanted to address certain issues of identity and 'Heimat' [the German word has more gravity than 'homeland'] without any self-pity," said Lara-Sophie Milagro, artistic director of the theater production company Label Noir Berlin and a member of the cast. The disturbing encounters portrayed on stage "are things that happen to us, but they don't define our lives 24 hours a day," she said. "We're not victims."

A recent performance of the play, however, was dedicated to a real victim. Angolan-born Amadeu Antonio Kiowa, 28, was the first person to die at the hands of neo-Nazis after German reunification. The small town of Eberswalde in the eastern state of Brandenburg, where he lived, made headlines for months after the incident in November 1990. Amadeu Antonio Jr. was born only weeks after his father's violent death.

Since the incidence of racist violence is still disproportionately high in Brandenburg, it was with some trepidation that the cast of Label Noir Berlin accepted an invitation to perform excerpts of "Bittersweet Homeland" in Eberswalde last weekend to mark International Anti-Racism Day.

For actor Leander Graf, performing in a place he half-jokingly referred to as "that Nazi town" was a chance to confront his own prejudices about a region known for its skinhead groups. "We can't escape the trap of judging other people," he said, adding that he was pleasantly surprised by the ensemble's warm reception during his three-day stay.

The actors play out scenes they have experienced in real life

Tear down the other wall

Playing to a full house, the ensemble drew sustained applause from the audience in Eberswalde.

"All the points they made on stage are true," said Darija Vidovic, who was born in Sarajevo and knows what it's like to be part of a minority in Germany. "The play should be performed on a big stage with more audiences because I'm convinced it would make a difference in people's consciousness."

While the scenes are at times painfully funny, they're also confrontational, compelling the audience to rethink its assumptions about what it means to live in an ethnically diverse society. Old prejudices wrapped in politically correct platitudes can be just as offensive as ignorance-based slurs.

The feeling of being reduced to a stereotype can lead to "anger that puts a wall between us and them," Leander Graf explained. But he hopes that "with this kind of humor, if we can somehow get people inside our world, in a nice way," that wall can come down.

"Heimat, bittersuesse Heimat" premieres in Berlin on June 4 and will tour the state of Brandenburg later in the year.

The UN day for the Elimination of Racial Discrimination has been on the global calendar for 35 years, but experts say there's a long way to go before it becomes redundant. Not least due to a rise in Islamophobia. (20.03.2010)

Four Cairo minaret callers bring their lives to the stage for a piece of documentary theater. Despite controversy and internal strife, "Radio Muezzin" gives a gripping insight into the world of its unlikely performers. (13.11.2009)