A wildlife group has been receiving daily calls from people reporting marauding crustaceans in Berlin's Tiergarten. The invasive species are often seen scuttling outside the Spanish Embassy. 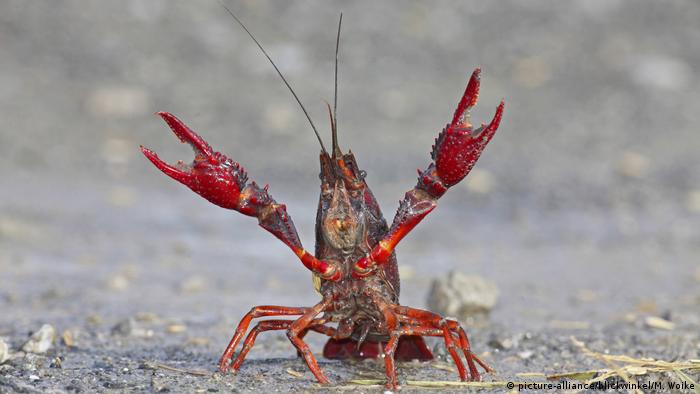 Parts of Berlin have been overrun with scuttling red crayfish that are likely trying to expand their territory, a German conservation network announced on Thursday.

The invasive red swamp crawfish have been spotted scuttling around the paths of the Tiergarten park and even parading outside the neighboring Spanish Embassy.

The red critters are often spotted in the park, but they have been appearing in much larger numbers this year, picking up considerable attention on social media.

Read more: Why urban wildlife is thriving in Berlin

The Nature and Biodiversity Conservation Union (NABU) said it has received large numbers of sighting reports in the past weeks. It said the increased numbers are problematic for the ecosystem of Berlin.

The Tiergarten population of the non-native crayfish likely took hold from people dumping them in the ponds there. They are a popular addition to aquariums given their striking appearance and their hardy nature.

Measurements by the fisheries office revealed that the water quality of Tiergarten was quite high, meaning the crayfish were probably migrating due to population expansion.

The North American species often squeeze out local populations of crayfish and carry diseases. They were labeled as an invasive species of high importance by the European Commission last year.

Under poaching laws, it is forbidden to catch and grill the tasty crustaceans.

Authorities are struggling to contain colonies of fire ants brought into Japan in shipping containers, with fears rising that this aggressive and rapidly-multiplying species will wreak havoc on local flora and fauna. (11.07.2017)

A library of invasive weeds and survivors

What's the difference between a weed and a plant survivor? Anne Percoco and Ellie Irons have been exploring that question through species found on wasteland in New York. With some exciting results. (08.03.2017)