Berlin bookstore shuts down after leftist boycott | Germany | News and in-depth reporting from Berlin and beyond | DW | 24.07.2017

A Berlin bookstore has been shut down following leftist protests against an event about Italian fascist writer Julius Evola. The Israeli owner said the loss of customers helped force him out of business. 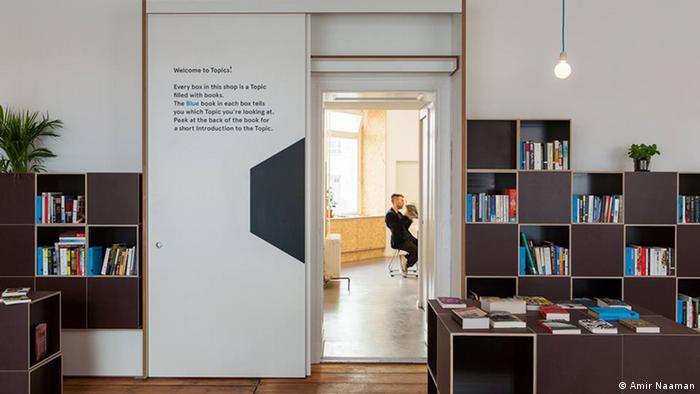 A Berlin bookstore owner has said that the protests and boycott orchestrated by local anti-fascists against a planned event about fascist Italian philosopher and occultist Julius Evola - whose work inspired both Benito Mussolini and the far-right movement in the US - has helped force him out of business.

Doron Hamburger, the co-owner of Topics Berlin, wrote several extensive posts on the shop's Facebook page explaining that the decision was "first and foremost financial," but that the Evola event was "an important causal factor that determined the decision."

"Whether it is a coincidence or not, after the Evola incident our sales had dropped drastically, and our willingness to create an interesting cultural program had dwindled, we, or maybe I should [say] I, could have gone on, 'fight' back or act as if nothing happened, but I was reluctant to do so, and of course the financial aspect of things was a major reason for that," Hamburger wrote before the store's closing party on July 22. 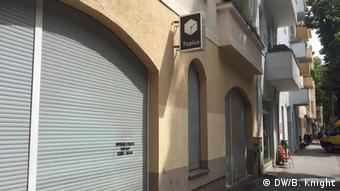 When the event, entitled "Revolt Against the Modern World," was planned for March earlier this year, Berlin's anti-fascist groups took to social media to call for a "shitstorm" against the store, arguing that the event was particularly inappropriate because the Neukölln district - a mix of immigrant communities from all over the world - had seen a spike in far-right attacks over the past months.

Indeed, the "TOP B3RLIN" Facebook page pointed out, leftist collective cafe "k-fetisch" - only two doors down from Topics - had been the target of an attempted neo-Nazi arson attack only months ago. The anti-fascist page argued that the event was intended to represent Evola as a "complex, misunderstood and increasingly powerful thinker."

"So drum together all your punk friends and their dogs and pay a visit to these eso-hipsters on Thursday (the day of the event)," the post said.

In the end, the event was canceled, though the fallout seems to have had an effect on a shop that was, by its own admission, already struggling financially.

"As for any claims of boycott, I am unable to say anything, I did hear, from hearsay only, about people who are saying that we are a 'Nazi recruitment centre,' that we were a 'dangerous shop who was giving platform to dangerous people,' but I didn't take that seriously because of how far away from the truth this thing is, I don't even know where to start," wrote Hamburger, last week. When contacted by DW, he declined to comment further. 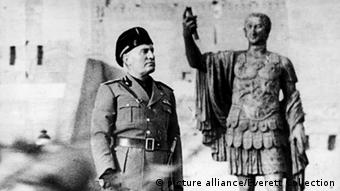 Mussolini was said to have been inspired by Julius Evola

But despite the controversy, Israeli-born Hamburger was careful to say that that he did not feel that the leftist anger against the shop was in any way anti-Semitic. A man working at the k-fetisch cafe next door told DW on Monday that he thought the idea of the Evola event was "shit, and we told them so" but that he hadn't wanted to see the shop shut down, because "we got on well with them."

Julius Evola, who died in 1974, was considered one of the most radical fascist thinkers of the 20th century. An admirer of SS leader Heinrich Himmler and the SS in general, Evola called himself a "super-fascist," and demanded the complete subjugation of women in society. He also wrote extensively about the occult and mysticism.

Hamburger vehemently denied that the talk, which was to be held by the US art historian DC Miller, was ever meant to rehabilitate Evola, though in yet another long Facebook post, from February, explaining why he canceled the event, the store owner wrote, "I have started myself contemplating as to what are the real intentions of the DC Miller's act and I would not go on assuming about it till I talk to him in private."

Hamburger also said that he had never "recognized any racist, fascist, supremacist tendencies" in his conversations with his "friend and colleague" Miller, who had organized events at the bookstore before.

Miller attended an event at London gallery LD50 earlier in the year that became the target of anti-fascist protests. That talk had been for an exhibition that included Hitler quotes and far-right memes, at which nationalist right-wing speaker Brett Stevens had been among the invited speakers.

The former squat on Rigaer Strasse 94 in Berlin - one of the last such leftist strongholds in Europe - has won another day in court. The owner's lawyer couldn't prove he was entitled to represent the case. (04.02.2017)

French authorities are investigating a Greek anarchist faction after an IMF employee was injured in a parcel bomb attack. The group also claimed responsibility for a similar incident at the finance ministry in Berlin. (17.03.2017)