French authorities are investigating a Greek anarchist faction after an IMF employee was injured in a parcel bomb attack. The group also claimed responsibility for a similar incident at the finance ministry in Berlin. 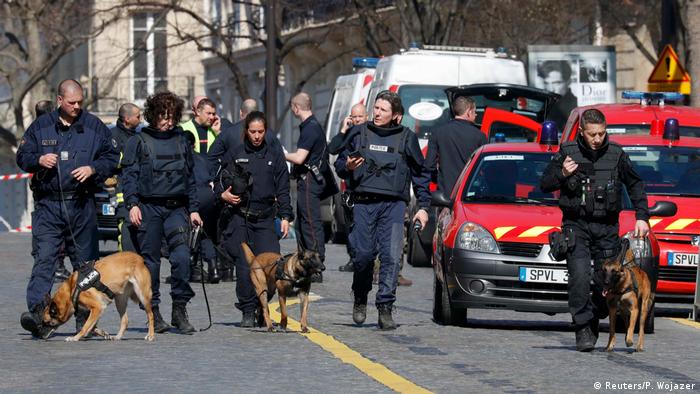 A 'homemade' letter bomb has exploded in the Paris offices of the International Monetary Fund, injuring a secretary. IMF chief Christine Lagarde has described the incident as a "cowardly act." (16.03.2017)

German police have said a package containing explosives was delivered to Germany's Finance Ministry. Germany's Federal Criminal Police Office has seized and destroyed the package. No injuries have been reported. (15.03.2017)

The explosive packages targeted the Paris headquarters of the International Monetary Fund (IMF) on Thursday and the German Finance Ministry building in Berlin a day before. While the Berlin parcel was discovered and destroyed by the police, the one in Paris was activated by a female employee.

A Greek far-left group, calling itself the Conspiracy Cells of Fire, claimed responsibility for the parcel mailed to Berlin. The group opposes capitalism, consumerism, police repression and worker exploitation.

Greek police could not immediately verify that the group was responsible for either of the attacks. However, both the Berlin and the Paris packages were likely sent from Greece, according to preliminary information. Each parcel listed a name of a Greek opposition lawmaker as sender and the Paris investigators found "residues of Greek stamps" on the letter.

Athens said that a Greek anti-terrorism squad was examining photos from the scene of the Paris blast.

"It is not at all pleasant that these parcels originated from our country but the issue of terrorism affects all European countries," public order Nikos Toskas told Greek Antenna TV.

The IMF secretary was lightly injured when shrapnel hit her in the face and her eardrums were hurt by a "rather violent noise," police chief Michel Cadot said. Two other people were in the room at the moment of the blast, but not injured.

According to Cadot, the device appeared to be "relatively rudimentary and nothing like a bomb," resembling a "firework or a big firecracker."

The method is typical of the Conspiracy Cells of Fire group, which often uses gas canisters, gunpowder extracted from firecrackers, and pressure cookers as weapons.

The group first drew attention by setting fires to Athens luxury car dealerships and banks in early 2008. Activities then escalated after the credit crunch. It placed homemade bombs outside a home of a senior prosecutor, Greece's former police minister, and the parliament building, although no one was injured in these incidents.

In 2010, the group sent a series of letter bombs to high-ranking European politicians, including Angela Merkel, Nicolas Sarkozy, Silvio Berlusconi and Jose Manuel Barroso, the former head of the European Commission. The attacks drew authorities'' attention but caused no injuries.

Several members of the group were arrested and sentenced in 2011.

Greece is still struggling with the fallout of the financial crisis, and many of its citizens resent the debt-relief conditions imposed by the EU, the IMF, and the European Central Bank. Athens authorities fear that more explosive parcels could be waiting undiscovered, according to a Greek official cited by the AP news agency.