Rasmea Odeh, a Palestinian woman convicted of terrorism in Israel, has been told to leave Germany after authorities canceled her appearance at an event in Berlin. Israel had heavily criticized the planned event. 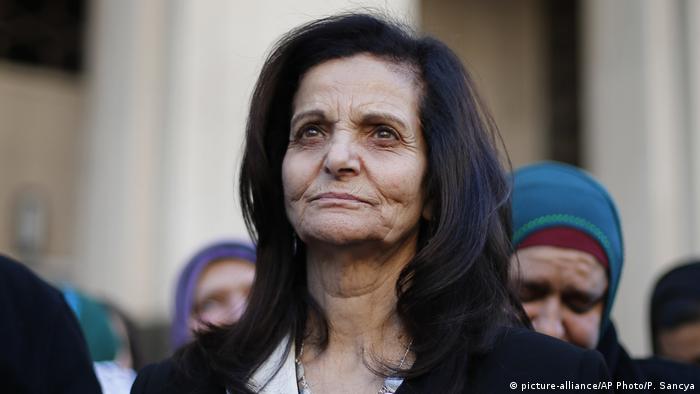 Berlin has banned Palestinian Rasmea Odeh — a woman convicted for an act of terrorism in 1970 — from engaging in political activities in Germany over fears of causing incitement against Israel.

Odeh had been due to speak at an event at a cultural community center in the Berlin district of Kreuzberg.

"Freedom of expression is a great good. If, however, the state of Israel and Jews are to be ruthlessly persecuted, the red line has been crossed," said Andreas Geisel, the interior minister for the state of Berlin, on Friday.

Odeh was sentenced to life in prison for a bomb attack in Jerusalem that left two people dead, and was released during a prisoner exchange in 1980. She is considered a sharp critic of Israel and has called for a boycott of the country.

Berlin's Interior Ministry invoked the Residence Act to ban Odeh's appearance. According to the law, the political activity of a foreigner can be restricted if it endangers the peaceful coexistence of different groups or public security.

The German newspaper Tagesspiegel reported that the Kreuzberg cultural community center had already cancelled Odeh's appearance, though some were concerned that she may appear outside the event.

Odeh also had her Schengen visa revoked, meaning she will now have to leave Germany.

Criticism from Israel, US

Israel had previously criticized Odeh's planned appearance at the center.

Israeli Public Security Minister  Gilad Erdan said it was unacceptable that "terrorists who pretend to be human rights activists abuse freedom of expression for terror and sedition."

Earlier, US Ambassador Richard Grenell also spoke out against Odeh's planned appearance. "Giving a Palestinian terrorist convicted of murder and terrorism ... a public platform legitimizes anti-Semitism at a time when we should be condemning it," he told daily newspaper Bild.

"It is unsupportable that a Palestinian terrorist should be celebrated as a freedom fighter here in Berlin for her murderous fight against Israel and the Jews," said Lala Süsskind of the Jewish Forum for Democracy and Anti-Semitism.

"Anti-Israeli and anti-Semitic resentments, wrapped up in liberation rhetoric, have no business here. I am glad that we have found a way to stop this propaganda," he said.