Berlin assures Britons ahead of Brexit 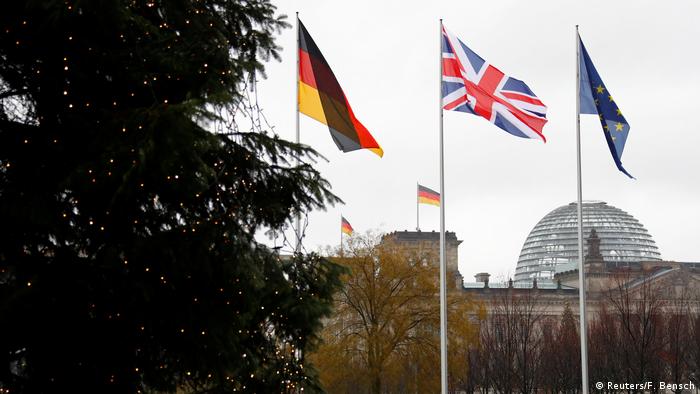 In an attempt to provide order and reassurance ahead of a potential no-deal Brexit scenario, Berlin city officials opened a registration form Thursday that British citizens living in the city can use to apply for a residency title.

The form description provided by Berlin's State Agency for Citizen and Regulatory Affairs said that proof of residency in Berlin would be necessary for British residents if the UK crashes out of the EU on March 29 without a withdrawal deal, as well as if a deal is reached.

According to the form website, from March 30, "British citizens in Germany will, for an initial period of three months until 30.06.2019, be exempted from the requirement to possess a German residency title."

At this time, "all British citizens should apply for a residency title at their local Foreigners Registration Office," the form site read.

"Until a decision has been taken on the application, the applicant will be allowed to continue to reside in Germany and to engage in economic activity of any kind," it continued.

It was a significant move by Berlin — which has the most British nationals of any German federal state — to provide extra security to UK nationals who fear losing their legal status in a no-deal scenario. However, much remained unclear as no legal agreement yet exists at the national level between Germany and the UK that would enable British citizens to remain legally in the country, even should their application for a residency title by the city of Berlin be approved.

It was not immediately clear what options were available to Britons living elsewhere in Germany, however Angela Merkel said in October that Germany was making contingency plans on a national level for a no-deal Brexit.

Around 100,000 British citizens live in Germany.

Meanwhile, the British Home Office announced that EU citizens and their families will be required to apply to an EU Settlement Scheme to continue living in the UK after 30 June 2021. The cost of an application has been set at 65 pounds (€72, $82).

The Home Office has published a paper on citizens' rights in the event Britain leaves with European Union with no deal.

The paper states that, "UK nationals who went to the EU and EU citizens who came to the UK before the UK's exit from the EU did so on the basis that they would be able to settle permanently and build a life here, or in the EU."

"That is why the UK has taken steps to remove any ambiguity and provide complete reassurance for EU citizens in the UK," it continues. "We ask that the EU and Member States do the same for our nationals."

A new British government website will advise on contingency plans people and business can make for a no deal scenario. Billboard advertisements for the website are expected to appear during the coming weeks.

The UK and the EU are struggling to sign off on a proposed withdrawal deal that would guarantee the rights of UK citizens living in the EU, as well as vice versa.

Should no deal be agreed upon, the legal status of UK citizens living in EU countries would be thrown into uncertainty, as their legal right to reside in the bloc is currently tied to the UK's being an EU member state.

A vote on a potential Brexit agreement negotiated by British Prime Minister Theresa May will take place during the week of January 14.