Berlin and beyond: Who needs a bikini?

Germans are a nation of lake swimmers. For many of them, the only way to do it is naked. But do you have to strip off to blend in? Tamsin Walker has headed out to Brandenburg to find out.

Who needs a bikini?

WorldLink: Who needs a bikini?

Come this time of year, the one thing Berliners all seem to want to do is swim. They squeeze themselves and their many, many belongings into tiny trains to be shunted beyond the city limits into the great watery beyond of Brandenburg - the lake-rich state that encircles the German capital. And it's much the same story up and down the country.

The lake swimming trend that is now very much a part of the fabric of this nation, took off around the turn of the last century, when something else waterfront-related was also starting to take off. Or to be more exact, was being taken off.

Though my own virgin visit to a German lake now lies deep in the past, the experience itself lives on in the depths of my mind, and the glorious Technicolor of the experience has not faded over time. It was my first ever encounter with FKK, an abbreviation for the Freikörperkultur, or "free body culture" that sees scores of people strip off to salute the sun in the buff.

Gawping from behind my sunglasses, and feeling very over-dressed in my bikini, I was forced to acknowledge what a sheltered life I'd led. Turns out, I was about a hundred years behind the curve, because Germany's nudist movement began in the early 1900s as a liberal counterpoint to conservative Prussian society. 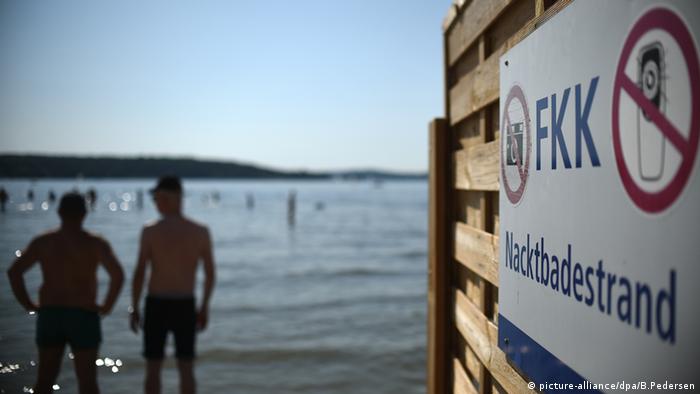 One of the rules of nude beaches is no photography

During those early years, it attracted both followers and attention. And though it suffered setbacks under Hitler - who disbanded FKK groups or had them forcibly integrated into Nazi organizations - Freikörperkultur continued to capture the imaginations of Germans intent on proving the human body is nothing to be ashamed of.

Driven by that determination, public nudity experienced another awakening in the post-war Germany of two halves. Most notably in the former East, where by the mid 1950s, it had become state-sanctioned - albeit with governing behavioral guidelines. Two decades further down the line, it had achieved a mainstream status that rendered FKK and GDR almost synonymous. Even now, almost thirty years since reunification, public nudity is part of the culture.

A lot of larger lakes in the former eastern states still have a designated FKK zone, but even at smaller ones, it's perfectly common to see people sunbathing, boating or splashing about in the water with nothing on. And having shed my Victorian skin of old, I have been known to join them.

Yes, I am now quite happy to throw my clothes to the wind, to convene with nature in my most natural state. And I like it, because there is something truly liberating about sitting in the nuddy on the banks of a lake, knowing nobody will bat an eyelid. Except, perhaps, the British newcomers hiding behind their sunglasses. But even they'll come round eventually.

Living with ghosts in Berlin

When, 72 years ago, the guns of WWII fell quiet across Europe, Germany was faced with the enormous task of dealing with what it had done. A task, which as Tamsin Walker found out on a walk through Berlin, is ongoing. (12.05.2017)

Berlin and beyond: enough English already

Berlin and beyond: The floral scent of weight gain

In this city of cultural diversity, one often unsung group is the Vietnamese. Their traditions are bright and rich, and as Tamsin Walker found out, sometimes take some getting used to. (26.05.2017)

WorldLink: Who needs a bikini?